Before we ever visited Mexico, one thing we thought we knew about Mexico well was the food.  Tacos, burritos, nachos, and fajitas are our go-to comfort food.  Imagine our surprise when we found some very different menu offerings south of the border, with most of our favorites conspicuously missing.  It turned out that fajitas originated in the U.S.; nachos were created in Mexico but were custom-made for American palates and are not a very popular dish anywhere in Mexico; tiny versions of burritos, called “taco de canasta” are mainly served in northern Mexico.  While we did find tacos, they were not stuffed with cheese and lettuce but were modestly topped with cilantro and onions.  Fortunately, what we did find more than made up for our missing favorites. 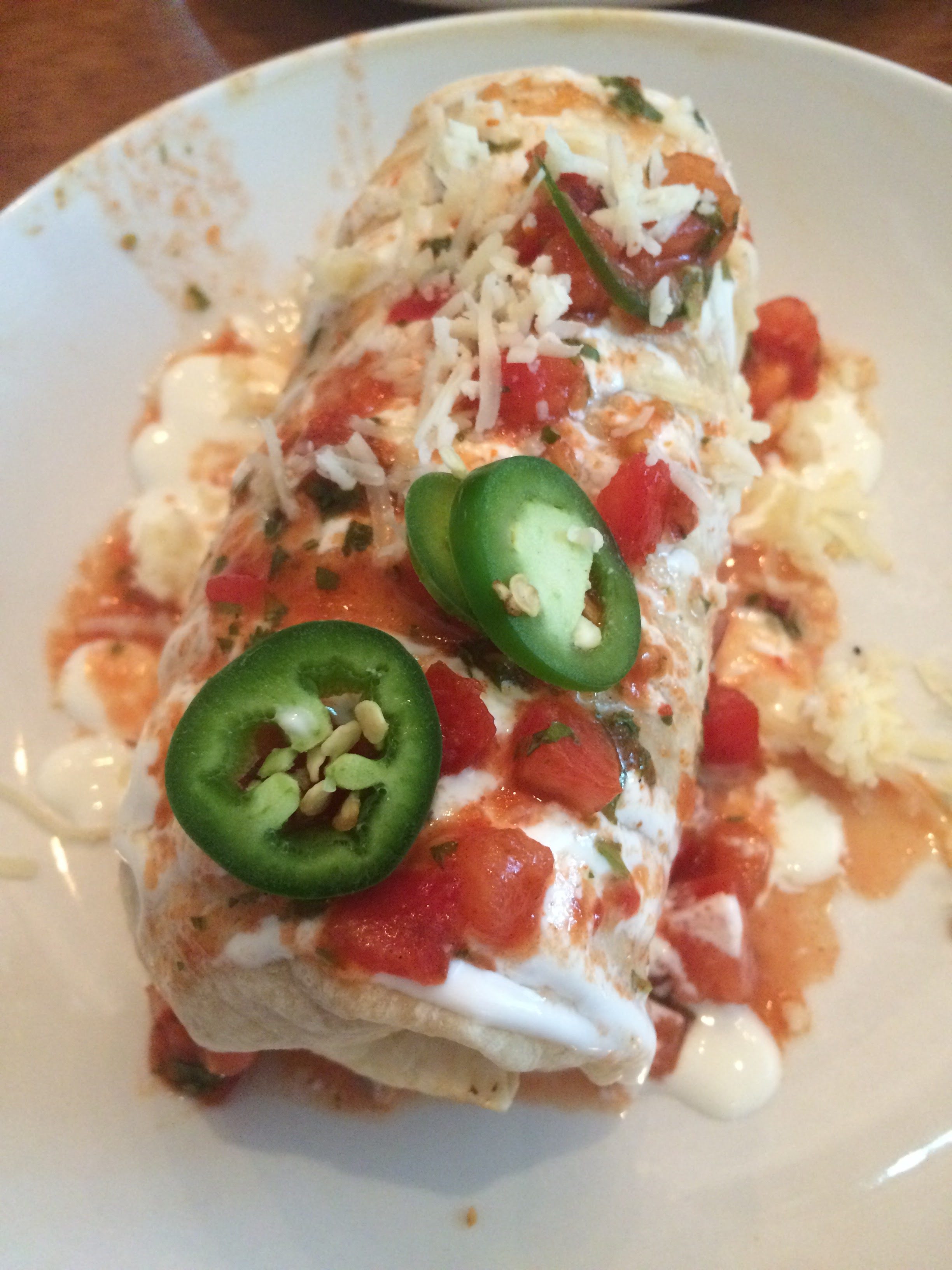 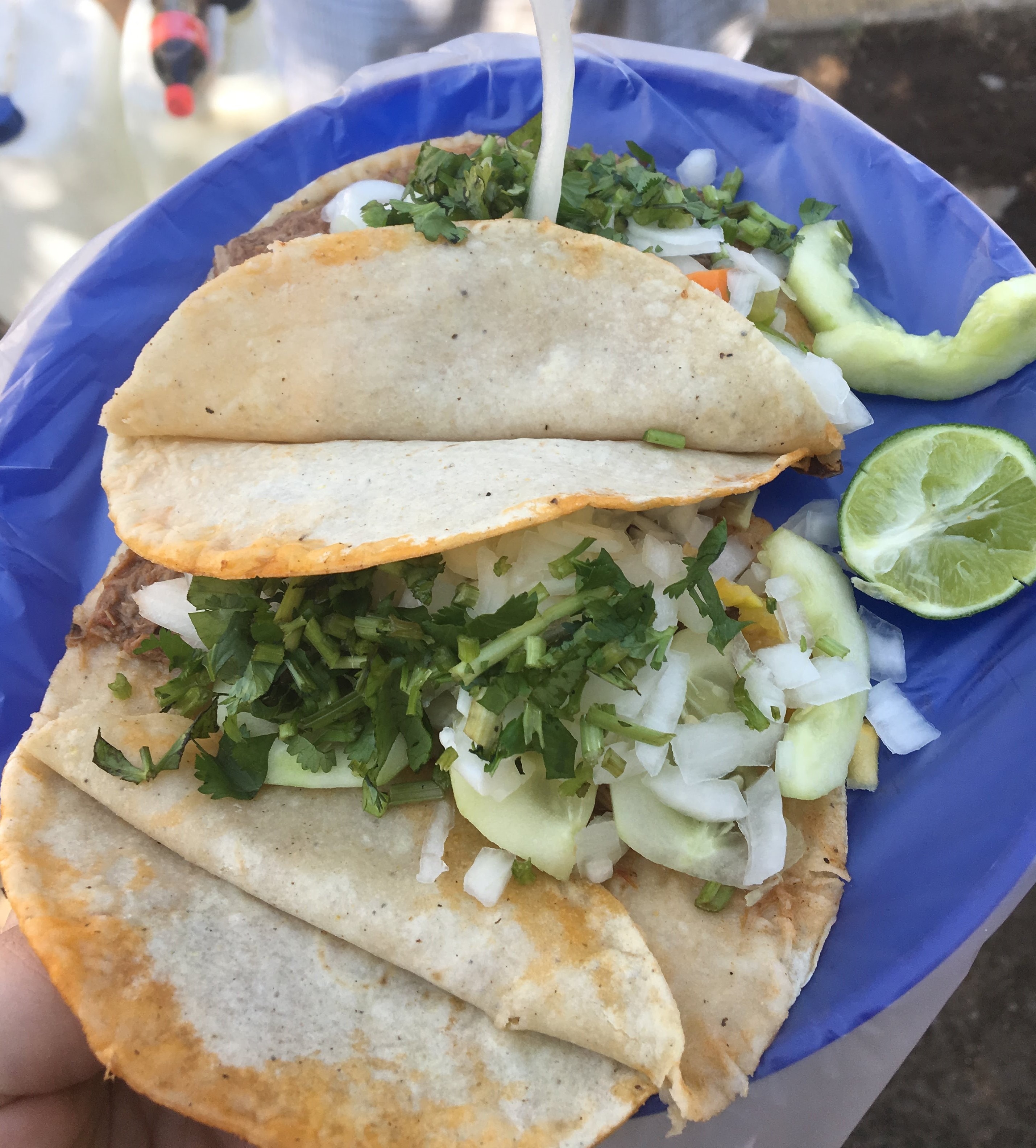 Mexican cuisine is the country’s business card and not long time ago, UNESCO recognized it as an Intangible Cultural Heritage of Humanity.  Each region of Mexico has contributed something unique to Mexican cuisine.  The state of Jalisco, for example, is known for its “drowned sandwiches” (tortas ahogadas) and spicy goat stew (birria).  Oaxaca gave the world tlayudas, while Michoacán can be credited with carnitas.

Puebla, located two hours east of Mexico City, is one of Mexico’s leading regions known for its contributions to Mexican cuisine.  For three days, as we ate our way through Puebla and neighboring Cholula, we wondered if we knew Mexican cuisine at all.

Mole poblano is probably the most famous food in Puebla.  The dish even refers to Puebla in its name (poblano means “from Puebla”). I tried this dish for the first time in Chicago years ago and did not understand it at all.  I recall getting a plate where rice and chicken occupied one-third of the plate and thick brown sauce filled up the rest of the plate to its edges.  I recall being confused as to why the main ingredients were so heavily underrepresented giving space to … some brown sauce.  It turned out that the sauce, mole, was the dish with rice and chicken playing only the second fiddle.  I did not like mole because the flavor was too weird for my taste, and I was not accustomed to this chocolaty taste of the wild mix of chilies, pepper, almonds, nutmeg, and other spices and ingredients.  However, visiting Mexico and trying it there, made the dish grow on me.  There is no uniform recipe for mole poblano as they vary from abuela to abuela.  In Mexico, Oaxaca also boasts a mole dish, and of course, people from that state claim that mole oaxaqueño is better than mole poblano.  But that’s just a sign that a dish is popular when several places claim its origins or assert the superiority of the local variation of the dish.  Ask, for example, Colombians and Venezuelans who came up with arepas first or who has the best arepas and you may provoke a military conflict between these two neighboring countries. Another quintessential poblano dish is chiles en nogada.  It is a poblano pepper stuffed with picadillo (a mix of shredded meat, fruits, and spices) and topped with a walnut-based cream sauce (nogada) and pomegranate seeds.  The dish has the coloration of a Mexican flag: green pepper, white sauce, and red pomegranate seeds.  In Puebla, the dish is quite popular in September when pomegranates are in season and patriotic feelings run high as Mexico celebrates its independence on September 16.  We had this dish for lunch on our first day in Puebla and it was just perfect. It was exotic enough but not too strange and we liked its sweet taste.

If chiles en nogada requires sitting down, the classic street food of Puebla, taco arabe or “Arab-style” taco, can be eaten on the go.  We had taco arabe as a quick snack in the central square of Puebla taking a break in sightseeing. This Mexican fast food is a good example of how immigrants can influence local cuisine by bringing their cooking traditions to a new land.  Taco arabe was created by Middle Eastern immigrants in the 1930-s by combining Mexican and Middle Eastern cuisines.  The name “taco arabe” is misleading as taco arabe is not really a taco: the filing, cumin-marinated pork, is wrapped in pita bread.  The more appropriate name is probably shawarma poblano. Another local specialty in Puebla is a cemita.  Trying to explore things in a true sense, we decided not to look up what cemitas were and just ordered them.  The waiter came to our table and took our order of two cemitas.  What arrived at our table 15 minutes later truly shocked us.  Cemita is a type of Mexican torta, but… of enormous size.  Even a half of a cemita would be enough to feed us both; yet, we had two cemitas, one for each.  Initially, I thought this was a joke, a prank by a local eatery, with the restaurant’s staff looking at us from the kitchen and laughing their asses off seeing how these two gringos would handle these oversize sandwiches.  We quickly embraced our fate and started to work on cemitas.  Knowing that our Airbnb didn’t have a fridge and we couldn’t take leftovers with us, we decided to eat as much as we could.  Although neither of us could finish our cemitas, we stuffed ourselves so much that we couldn’t eat any more all day.  After leaving the restaurant, we crashed under a tree in a nearby park, trying to give our bodies some time to digest the enormous amount of food we had just eaten.  Julia, who is Jewish, was laying on the grass and holding her stomach in visible discomfort, turned to me and asked: “Are you sure they are called cemitas and not anti-cemitas?”  I was too full to laugh at this poorly constructed pun.

We never went hungry in Puebla and Cholula.  Even when we were hungry, the food was just around the corner.  On a beautiful sunny morning, after visiting a church overlooking Cholula, we descended from the hill and were looking for a place where to eat lunch. Before entering a busy street with restaurants, we saw a woman carrying two full buckets of something.  “Chapulines! Chapulines!” the woman announced loudly her presence.  Julia and I looked at each other and then looked at the buckets she was carrying.  They were full of … dried grasshoppers.  We stopped the woman and in our limited Spanish asked what exactly she was selling.  Apparently, chapulines are a local delicacy of Central Mexico, and we were fortunate to visit Puebla and Cholula when this local snack was in season. After grasshoppers are collected during summer when they hatch, they are toasted in lime, chili, and salt.  The sellers then take buckets of chapulines to the local markets and sell them by a cup.  To some Western travelers, eating chapulines is akin participating in an X-Factor competition and eating some disgusting bugs.  But snacking on chapulines was something new and exciting and what we love travel for.  Also, chapulines did not have any weird taste.  Yet, as we were enjoying this crunchy local snack, we caught some repulsed glances from some fellow Western travelers.

And good thing these people did not follow us when we went to dinner on our last day in Puebla to try another local delicacy “maguey gusanos”.  Maguey gusanos are grubs collected from a local agave plant called maguey and were one of the most expensive items on the menu.  Until recently, I was very conservative in my travel food escapades and often would decline to try such “local delicacies”.  In Segovia, Spain, I refused to eat a roasted piglet that was delivered to our table because his little head and ears reminded me of a dog we left at home at that time.  In China, on the main tourist drag in Beijing, I refused to eat fried bugs as Julia munched on fried scorpions (she is definitely a more adventurous eater than I am).  But in Mexico, I felt ready to go outside of my comfort zone.  Anthony Bourdain, my main inspiration for keeping an open mind about food, would have been proud of my bravery.  As I was placing the order, Julia was looking at me with understandable suspicions, fearing that I would not follow through and mentally preparing herself that she would have to eat the entire plate of grubs by herself.  But this time, I did not let her down washing down tasty grubs with fine Mexican mezcal.  I can attest that fried grubs taste like French fries, with crunchy frames and creamy filling. In Puebla, we discovered the truth that there is no such thing as one unified Mexican cuisine. Mexican dishes vary from state to state as much as they do between different countries.  What really inspires me is that with our plans to continue visiting different parts of Mexico, we expect to discover new dishes and tastes of Mexico. And we will keep you posted about our food discoveries south of the border. 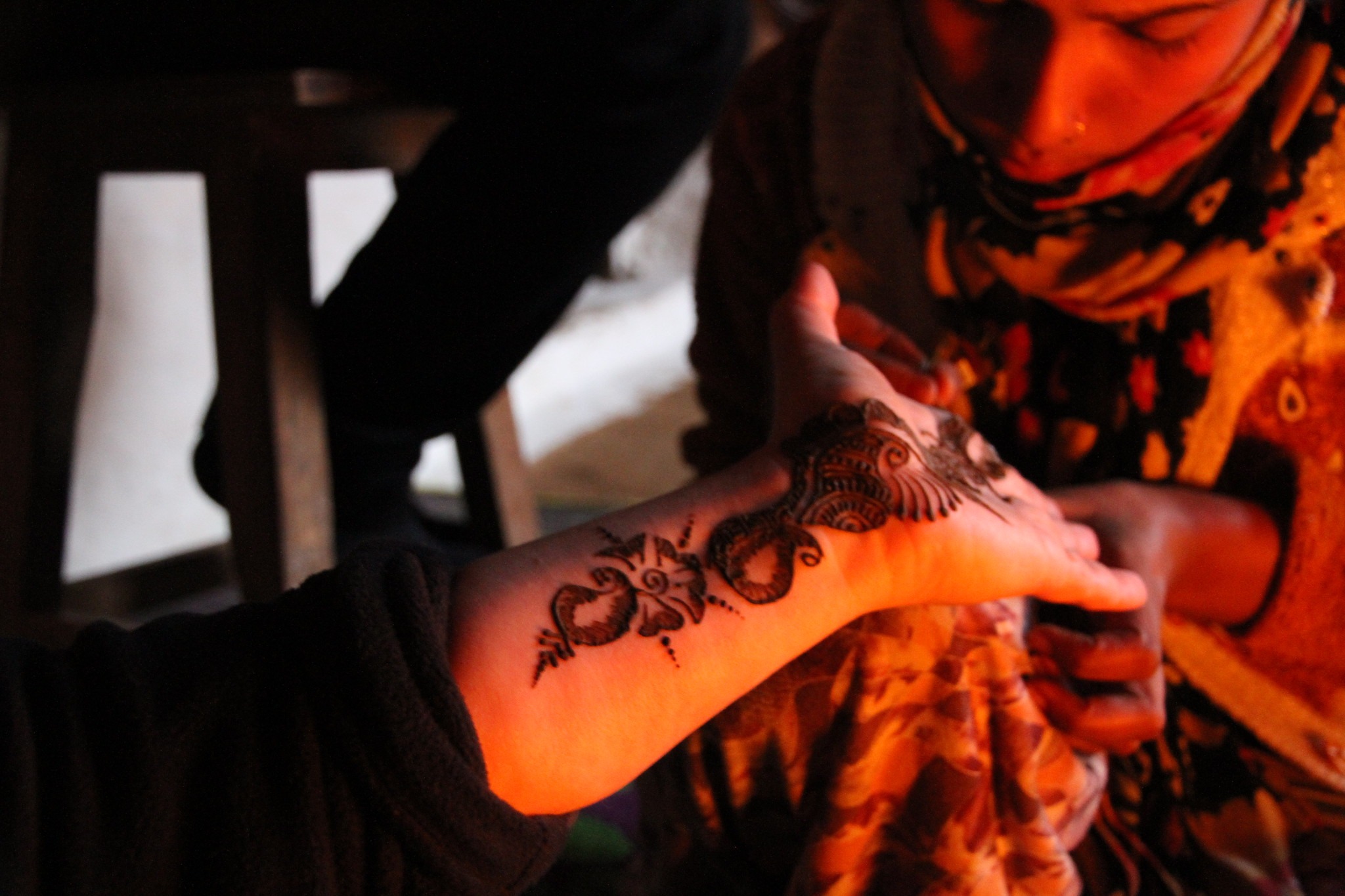 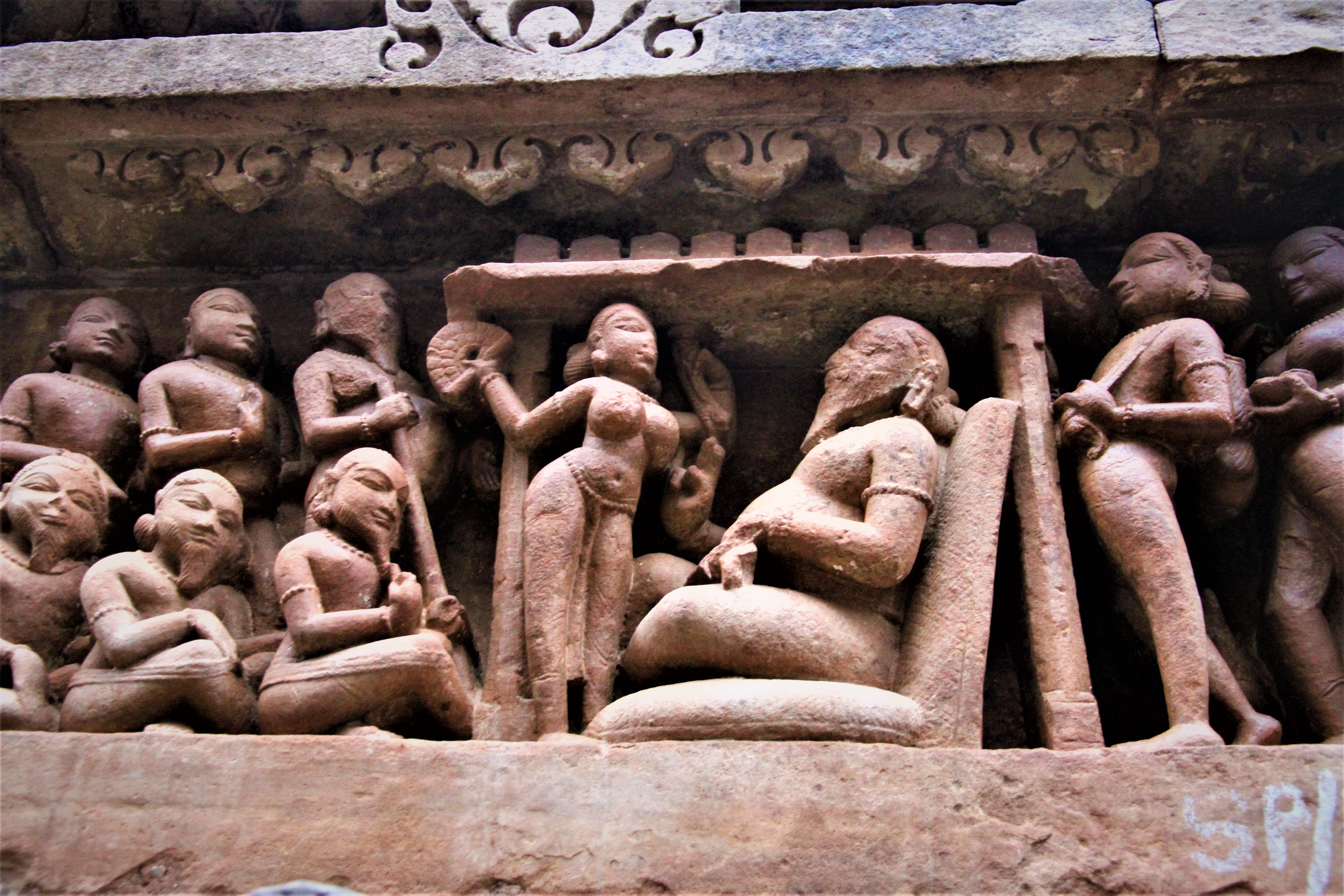 NSFW Temples or How Victor and I became Temporary Celebrities