“We have a gap in the itinerary,” I said, “I don’t have an Airbnb booked for the night of Dec 30th. Where are we going to be?”

“We are going to camp on top of the volcano,” Victor said.

Here’s the thing.  I didn’t even question it.

I know Victor hates camping passionately, so if this is something he decided to do completely unprompted by me, it must be a once-in-a-lifetime bucket list type of adventure.  And I am all in.

A week later, when we settled in for a detailed discussion of our itinerary, I learned the following things:

I realized I really should have been questioning this venture all along.  Victor explained that he found all this information on some Spanish-speaking forum where the locals were discussing their awesome overnight camping trips on the volcano.

“We have Luis’ phone number,” Victor said. “And a very approximate location of where he might be. He might be in the village of Conchagua or the city of La Union or at the base of his volcano.  Or, I guess, at the top of his volcano…”

Now, this seemed very strange to me at the time.  But when we started exploring El Salvador, I learned that this is just how tourism works there.  Very few businesses have websites or post their correct business hours on Google.  Some restaurants operate only on weekends and stores will be open whenever the owner gets there.  Hotels have no online reservation system, and you’ll need to call to reserve a room.  Excursions are planned by going to the town center and asking around for someone to help you get on top of the volcano/go ziplining/guide you through hiking trails.  Victor became an expert at hiring hiking guides, 4-wheel trucks, and surfing instructors by recommendations of Airbnb owners, restaurant waiters, and random locals.

A few days before our planned volcano excursion, we sent a WhatsApp message to Luis.  It went unanswered.  We had no idea where to find Luis, what time we needed to be there, and most importantly, where we needed to be.  We spent the morning of the 30th enjoying our last day on El Cuco beach and set off for La Union in the afternoon.  As we drove away from the beach and deeper inland, the temperature rose, and the heat became almost unbearable.  As we were driving, I kept zooming in an out of the volcano on the map, trying to figure out where we should start our search for Luis.  We were going to pass the volcano first, then the village of Conchagua, then the city of La Union, so it made sense to start at the base of the volcano.

Once we got close to the volcano, we searched for any roads leading to a possible base camp.  The only potential path was a pothole-riddled gravel road which headed straight towards the volcano and then steeply up.  We kept driving.

The village of Conchagua consisted of a main square and a few narrow streets.  We parked at the square and Victor went into the nearest store to see if anyone knew where Luis was.

“Luis! Volcano!” the owner of the store said and pulled out her cell phone.  Unfortunately, Luis didn’t pick up. Victor came back to the car and, after a few minutes of contemplation, said, “Let’s go talk to the police.  They might know.”

The police station was a block away.  Victor walked in, while I peered in from the doorway.  A tough-looking policewoman dressed all in black with shiny boots, immediately turned towards us.  An overweight policeman, wearing a regular uniform with his belly hanging over his belt, suddenly started shuffling papers in the corner.

“Qué pasó (What happened)?” the policewoman barked.  The last thing she needed during her shift in this sleepy town was some distressed tourists.

Victor explained that we were looking for Luis and were hoping for police help in locating him.  The policewoman visibly relaxed while her partner stopped pretending to shuffle papers and leaned back in his chair.

The policewoman grabbed a phone and started dialing.  Luis, who didn’t respond to our WhatsApp messages and didn’t pick up on a store owner, immediately picked up his phone for the call from the police.

“Don Luis!” the policewoman said, “Don Victor would like to visit the volcano.”

She listened, nodded, and hung up the phone.

“Go to the Chinese restaurant.  It’s not far.” She said.

“The Chinese restaurant.” Was the only answer we received.

I pulled out Google maps.  The only Chinese restaurant in the area was in La Union.

This made no sense, as La Union was 6 kilometers away and the policewoman acted as if the Chinese restaurant was just down the road.  We tried to ask her where it was on the map, but she had no idea.  We started driving, occasionally stopping and asking locals if they knew of any local Chinese restaurants.  We got a lot of blank stares, shrugs, and confused mumbling.  Apparently, Conchagua locals haven’t been spoiled with an over-abundance of sweet and sour chicken and crab rangoons.

We drove into La Union, through the city traffic, and parked where El Dragon restaurant was marked on Google Maps.  We were surrounded by nondescript buildings, no restaurant in sight.  Victor sighed and got out of the car.  The “Where in the World is Luis” game was about to end in victory or fiasco.

We walked around aimlessly for a few minutes until Victor spotted a grey building with a simple sign “Restaurante”.  Nothing about the building indicated a Chinese restaurant, so we figured we could ask people inside where El Dragon was.  I walked in first and froze.  We were surrounded by red lanterns, pictures of shiny dragons on the walls, and a tantalizing smell of a stir-fry.

“Luis!” Victor screamed into the dark depths of the restaurant.  (This is where our recount of the events begins to differ.  Victor insists he never screamed and simply politely asked a waitress.)

An old Chinese man appeared out of nowhere and bowed deeply, “I shall guide you to what you seek, young travelers.”

(Again, I need to point out that to this day Victor denies that this is how it happened.)  The old wise man explained that Luis actually had an office, and that office was across the street.  A helpful clerk in the office sold us two tickets to the volcano and explained that tents and sleeping bags can be rented at the top.

After buying some food and water at the local market, we packed our small backpacks for everything we needed to spend one night – extra warm layers, portable chargers, and a change of socks and underwear.

A few minutes later, a giant truck pulled up and a man we assumed was Luis greeted us enthusiastically and gestured at the open truck bed, “Get in!”

This was going to be an adventure.

Next Week:  The Most Beautiful Place We Barely Slept At. 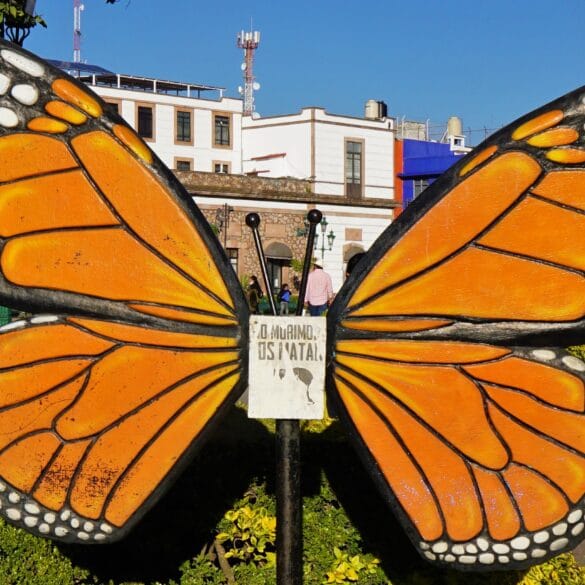 The Holy Pilgrimage of the Monarch (Butterflies) 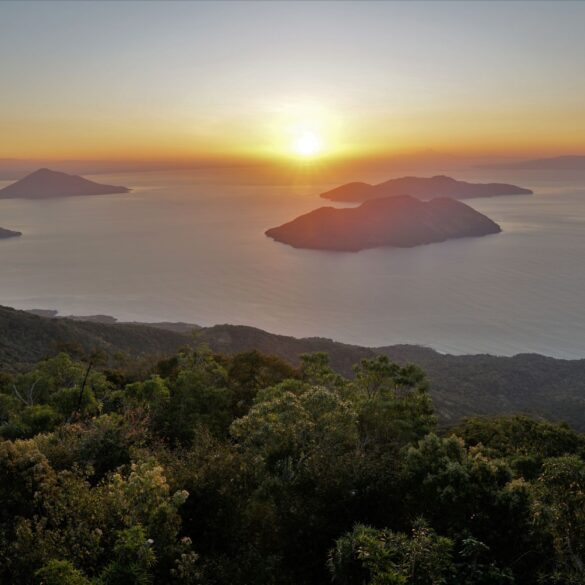 Camping on Top of the Conchagua Volcano