Summer is here and for me, that means one thing - baseball.  In my view, nothing beats spending a couple of hours on a warm summer afternoon at a ballpark watching a game and connecting with friends over beer, peanuts, and crackerjack.  Despite constant calls for changing the rules to make the game more dynamic, baseball is still an American pastime (and is rightfully so).

In our U.S. travels, we love visiting ballparks because such visits give us a chance to learn a little bit more about local sports history, food, traditions, and even get a glimpse into the city’s psyche.  To date, we have been to 10 major league ballparks but have plans to visit all 30 one day.  Today’s post is the first in our “baseball stadium” series describing the ballparks we visited.

The only logical place to start describing our baseball travels is the place where it all began.  In the now distant 2004, shortly after I emigrated to the U.S., I visited Wrigley Field for the first time.  I did not know the rules of the game, but was mystified by this strange sport with bats and gloves and statistics and wanted to learn all about it. Wrigley Field, on the northside of Chicago, was the fitting place for that.  In 1914, when Wrigley Field was constructed, one in every four Chicago residents was foreign-born, and Wrigley was that melting pot where immigrants from different countries were connecting and learning about the new game and new country.  Julia, who grew up in the U.S. and knew the basic rules of baseball, took me to see the Cubs one afternoon and explained the game to me.  And that started many years of visiting Wrigley, rooting for the Cubs, and embarking on other baseball adventures: from visiting a minor league game in Davenport, Iowa cheering for the River Bandits to perusing the exhibits at the Japanese Baseball Hall of Fame in Tokyo.

Wrigley Field, the jewel-box stadium planted in the middle of a residential neighborhood, is a true attraction of Chicago.  The Cubs may suck, but the stadium never disappoints.  From the old-time manual scoreboard to the green ivy-covered outfield, from the rooftop seating adjacent to the stadium to the raucous crowd in the bleachers waiving the W flag after the victories, Wrigley has it all.  The stadium is the best place to learn about the history of the team: the Billy Goat Curse, the Steve Bartman incident, and 108 years without the championship.  While it is possible to take a tour of the ballpark, the best way to experience Wrigley Field is to catch a game at this iconic stadium. Go Cubs Go! Surprisingly, after living in the Chicagoland area for nearly 20 years, I have visited the White Sox stadium only 3 or 4 times.  It is probably because watching a game at the rival’s stadium is simply undesirable on some level.  A former co-worker, after finding out that I was a Cubs fan, was sincerely puzzled noting that philosophically I should be supporting the Sox, the blue-collar team with the ballpark located where a lot of immigrants had settled rather than the overpriced Cubs playing in the affluent Lakeview.  There is probably some truth to that, but you don’t switch alliances after committing to one team.  Nor do I want to.

The White Sox stadium that recently changed one ugly name for another (what was wrong with the good ol’ Comiskey Park?) is one of the first things people see when they drive into the city from the east.  The stadium is home to a storied franchise with championships to its name and appalling scandals including throwing the 1919 World Series.  For those who visit Chicago and can’t find tickets to the Cubs, the White Sox stadium presents a cheaper alternative to catch a game in Chi-Town and a chance to cheer on President Obama’s favorite team. I have been to a handful of games at American Family Park (formerly, Miller Park), and most of them were Cubs-Brewers games.   For a lot of Cubs fans, visiting American Family Park is often a cheaper option than attending a game at Wrigley.  The I-94 rivalry attracts a lot of Cubs fans who invade Milwaukee and its ballpark.  Just a short time ago, when the Brewers lacked a good team, the Brewers’ home games felt more like the Cubs home games with the stadium temporarily turning into Wrigley Field-North.  These days, Milwaukee has a decent team featuring the League MVP Christian Yelich and that won the NL Central Division twice in the last 4 years.  As a result, the local fans show up even when the despicable Cubs are in town.   On the days when the Brewers do not play the Cubs, tickets are always available, and the ballpark is a fun place to catch a game.  Beer, bratwursts, and cheese curds, Wisconsin’s major league ballpark presents a one-stop for the best Wisconsin can offer.  The fans are entertained by the team mascot Bernie Brewer, a brewer with a fluffy yellow mustache, racing sausages, and the “Roll Out the Barrel” song played during the seventh-inning stretch.   The stadium’s retractable roof also comes in handy, especially early in the season during the unpredictable Wisconsin weather. Named after the Anheuser-Busch Brewery that’s located just two miles from the ballpark, Busch Stadium is home to one of the most successful baseball franchises – the Cardinals.   The stadium is filled with history and championships.  As Cubs fans, we were in the enemy’s territory, but it was exciting to walk around the stadium, read the plaques about the most notable Cardinals games, and take pictures next to the statues of the Cardinals legends.  Before the game, we also browsed the stadium’s gift shop and Julia burst out laughing when at the end of our visit she saw me walking up to the cash register carrying a book about the Cardinals’ greatest players.  She mocked me through the rest of the day, joking that I did not deserve to wear my Cubs T-shirt.

Inside, we walked around the stadium a bit, grabbed a quick bite, and sampled local beers (not Budweiser).  The day was perfect for baseball; but unfortunately, the Cubs decided not to show up that day.  Sitting high up in the infield terrace on a beautiful summer day, we were witnessing our Cubs getting slaughtered on the field.  And when it was too painful to look at, we just gazed over the stadium enjoying the views of the St. Louis downtown and the Gateway Arch. Kansas City was everything you can ask for a baseball trip.  One of our first stops in the city was the Negro Leagues Baseball Museum.  Located at the intersection of 18th Street and Vine Street next door to the American Jazz Museum, the museum is a “must” for learning about Jim Crow and baseball in segregated America.  The museum is now a part of the U.S. Civil Rights Trail and tells stories of early pioneers and unsung heroes of the game, who were not allowed to play in the majors due to the color of their skin.  The museum visit revealed an additional layer of U.S. history that we were barely aware of.

Because Kansas City is one of the barbeque hotspots in the country, we tried to eat barbeque in as many places as possible: from Arthur Bryant’s to Stack Jack.  Kauffman Stadium was no exception. As the Royals and the White Sox were getting ready to take the field, we were in our seats munching on delicious burnt ends, cuts from smoked brisket, a traditional part of Kansas City barbeque.   The most striking part of Kauffman Stadium was the fountain and waterfall display behind the right-field fence.  As I was counting balls, strikes, and outs, Julia marveled at the flowing waterfalls that were beautifully illuminated in the evening. Next week, read about how a foul ball in Cleveland nearly killed Julia, how we ate one of the most disgusting dishes in Cincinnati, and many more. 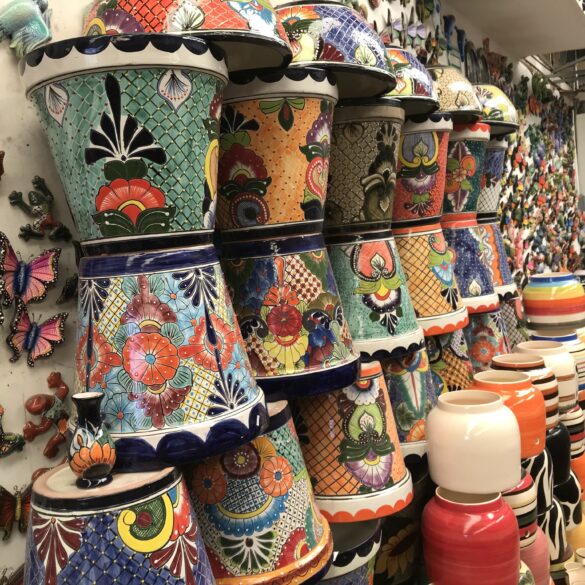 Traveling in Search of Mud 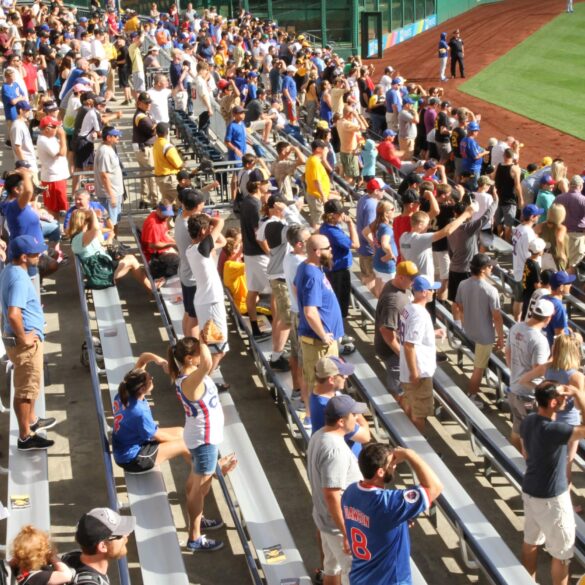