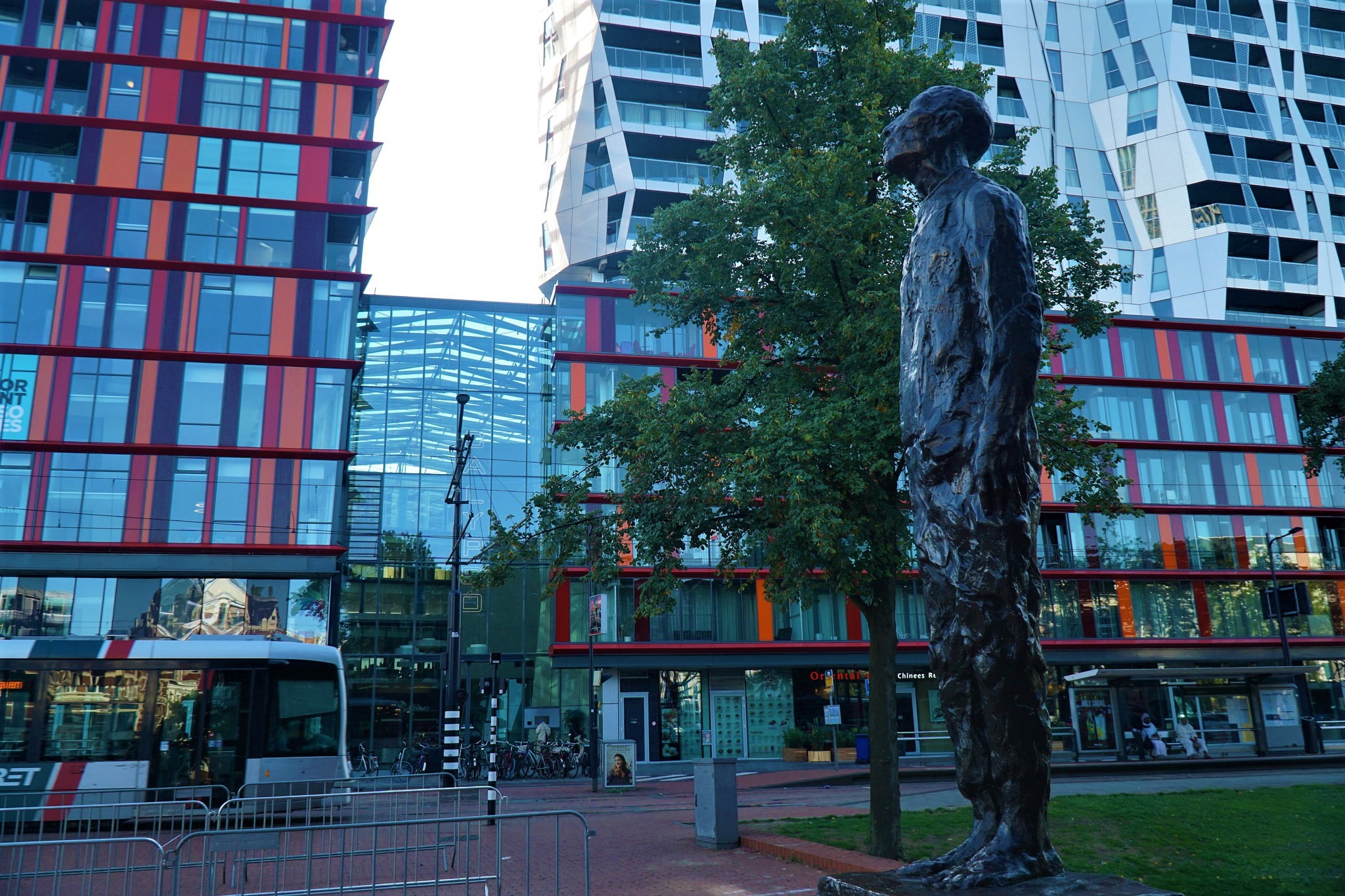 After the fire at the Notre Dame cathedral in Paris earlier this year, I saw so many social media posts of people lamenting that they did not get to see the Notre Dame cathedral before it was destroyed in the fire.  The lesson, of course, is that we should live now and not put off visiting special places.  In 2015, we arrived in Sao Paulo, Brazil just days after a fire severely damaged Museum of the Portuguese Language killing one firefighter, and all we got to see were the charred remains of the roof and walls of the building.

But sometimes, catastrophic events give places a fresh start.  Two of my homes, Chicago and Minsk, are good examples.  Both cities have been almost completely destroyed in the past.  Most of Chicago was devastated during the infamous 1871 Fire.  The tragic event provided the city with a chance to rebuild from clean slate and become home of the first skyscraper in the world and the mecca of American modernist architecture.  It is unlikely that Chicago would boast its current architecture if the old Chicago with its crooked streets and lack of alleyways remained intact.

Minsk, the capital of Belarus and my hometown, was destroyed by the Nazi Germans during the WWII.  When the city was liberated by the Soviet Army in July of 1944, all that remained was a pile of smoldering rocks with only a handful of buildings standing.  After the war, the city was rebuilt.  Minsk’s architecture is an interesting subject.  Some visitors find it repulsive and I have heard such adjectives as “ugly” and “very Communist” thrown about.  But if you want to see the best examples of grandiose Stalinist architecture, Minsk is the place to visit.

And this is why I found my visit to Rotterdam, the Netherlands, so fascinating.  Like Minsk, Rotterdam was leveled by the Nazis during the WWII.  In a matter of one day, the Luftwaffe pilots turned the old European port city into a pile of rubble.  Yet, Rotterdam used this terrible chapter in its history to get a fresh start and rebuild.  In a sense, Rotterdam became a Chicago of Europe.  A walking tour of Rotterdam reveals the full extent of post-war creativity.  Unlike Minsk, which was under the Communist rule for nearly 50 years after liberation and where all creativity was hampered by the strict norm of Communist architecture, Rotterdam is a city in a free-spirited Netherlands providing outlets for creativity to various architects.  The entire city is an excellent primer on European modernist architecture.

Taking a break from visiting quaint Dutch towns, such as Delft, Leiden, and Haarlem, we spent a day in Rotterdam and it dazzled us with its unusual and imaginative architecture.  Arriving from Delft on the train, we started our exploration of Rotterdam at the sleek-looking train station.  If you stand outside and do not know that you are looking at the train station, you may think that the building houses some sort of European Rock’n’Roll Hall of Fame as the facade looks like a tilted angle of an electric guitar suspended in the air.  Right next to the train station, competing for weirdness, is a modern-looking St. Paul’s church (Pauluskerk) that looks more like a fashion boutique rather than a church.  If God does exist, he (or she) wears Prada.  Walking just a couple of blocks from the train station, it became immediately apparent to us that the buildings in Rotterdam are anything but boring, with even the most trivial residential apartment complexes having their own quirks.

Speaking of unusual residential architecture, the most bizarre residential development in Rotterdam are infamous Cube Houses (Kubuswoningen).  Designed by Dutch architect Piet Blom in 1977, these 39 yellow cube homes are literally cubes that are tilted by 55 degrees.  The rows of these sunflower-looking homes create an impression of cubes thrown and frozen midair, threatening to fall on pedestrians.  As we were standing outside and looking at this weird housing project, we wondered: how do you live inside? Is it even comfortable there? To find answers and decide for ourselves if we would want to live in a place like this, we went inside of one of such cubes – the Show Cube Museum.  The cubes do look livable inside.  However, there is plenty of space wasted to level the 55-degree tilt.  Also, living in a place like this one can forget about buying furniture in IKEA as everything needs to be customized. 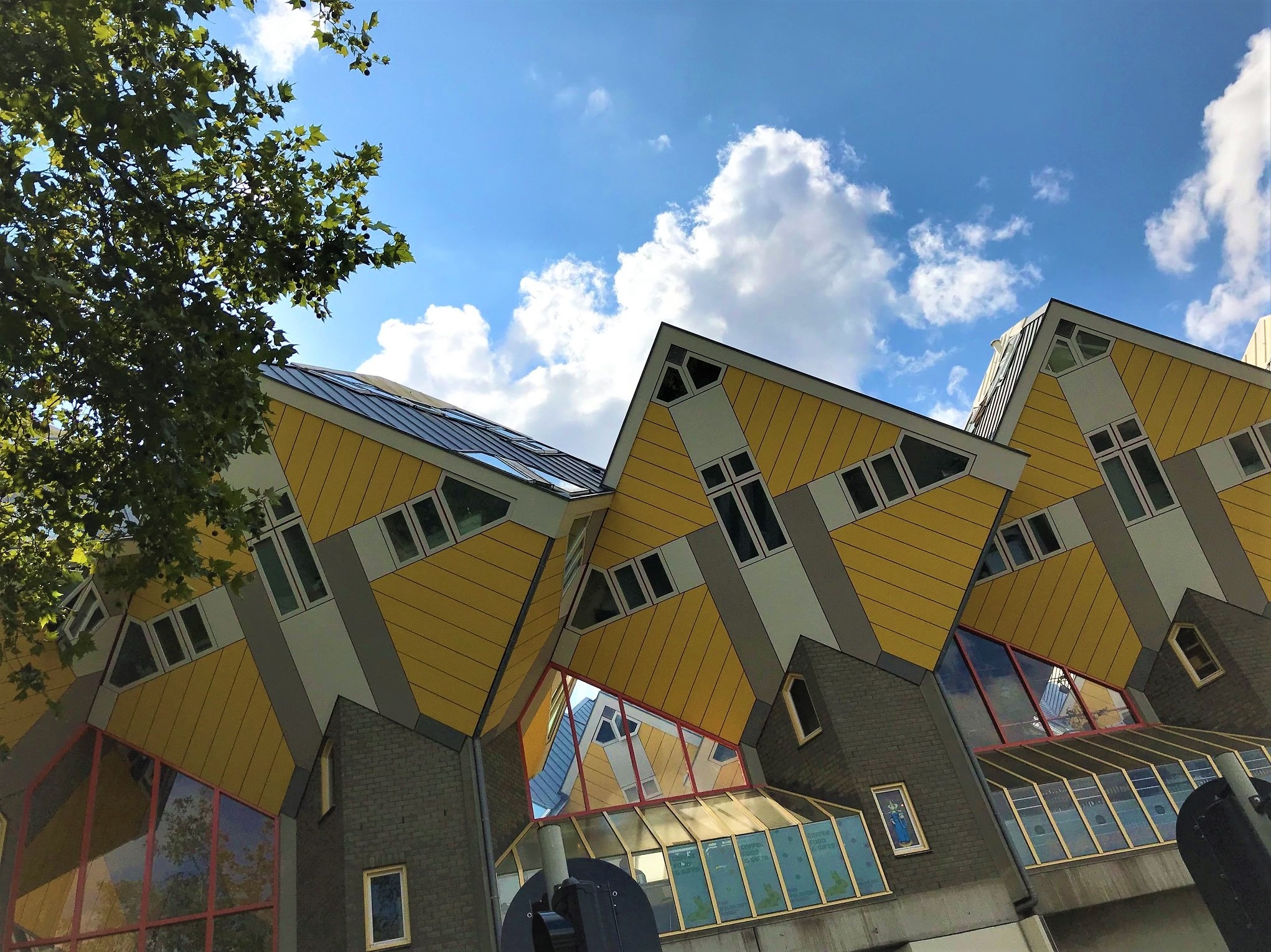 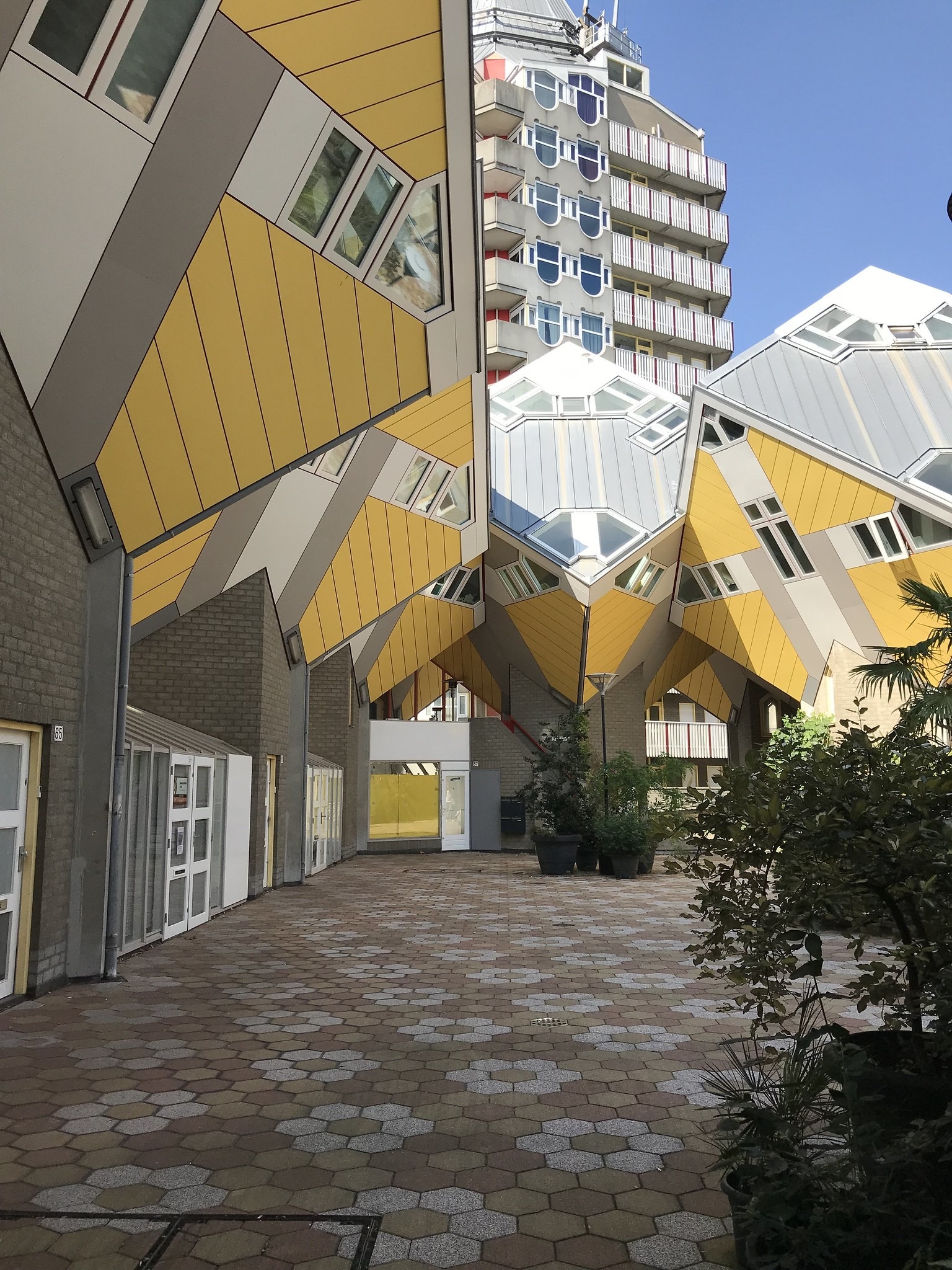 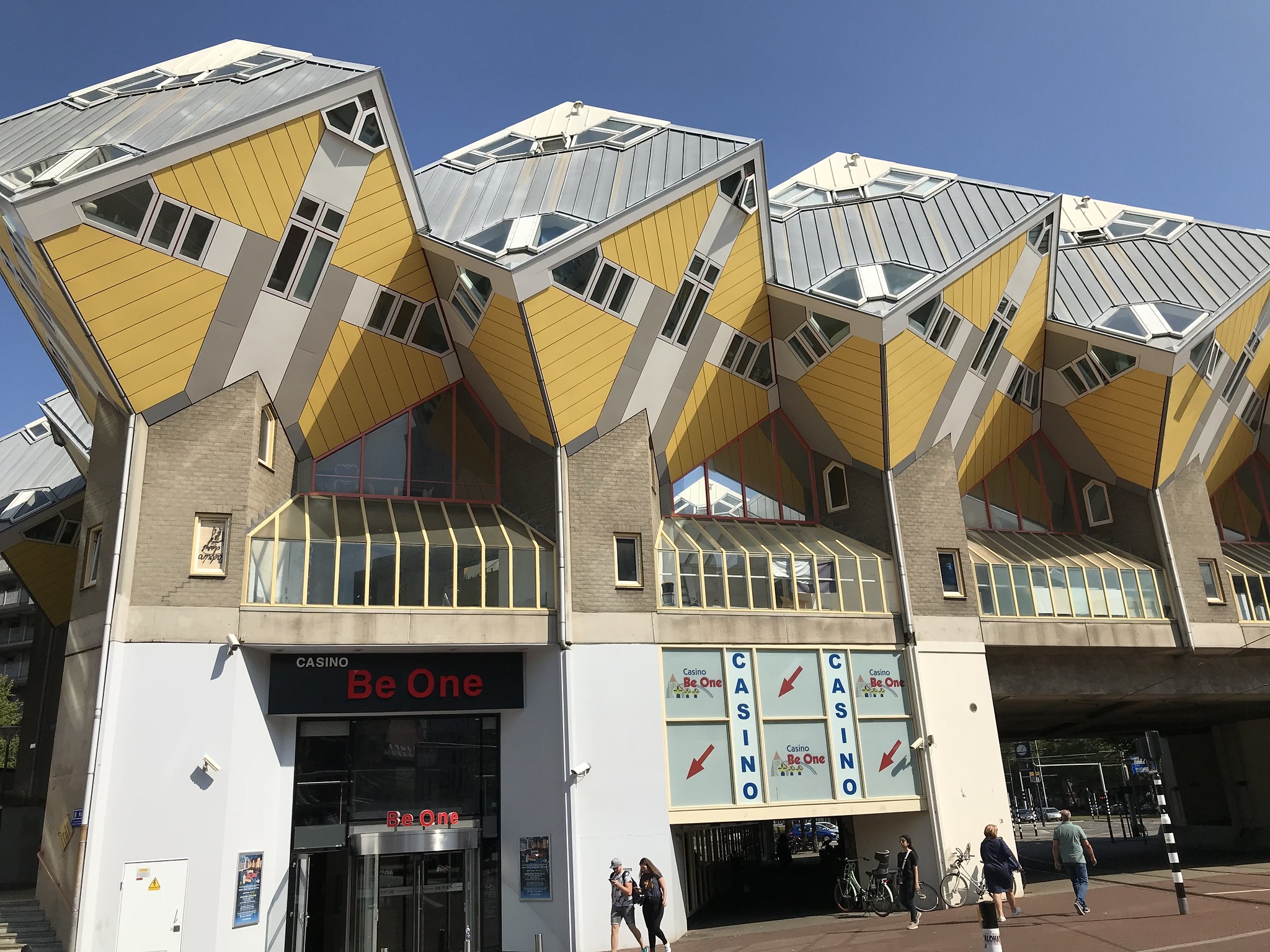 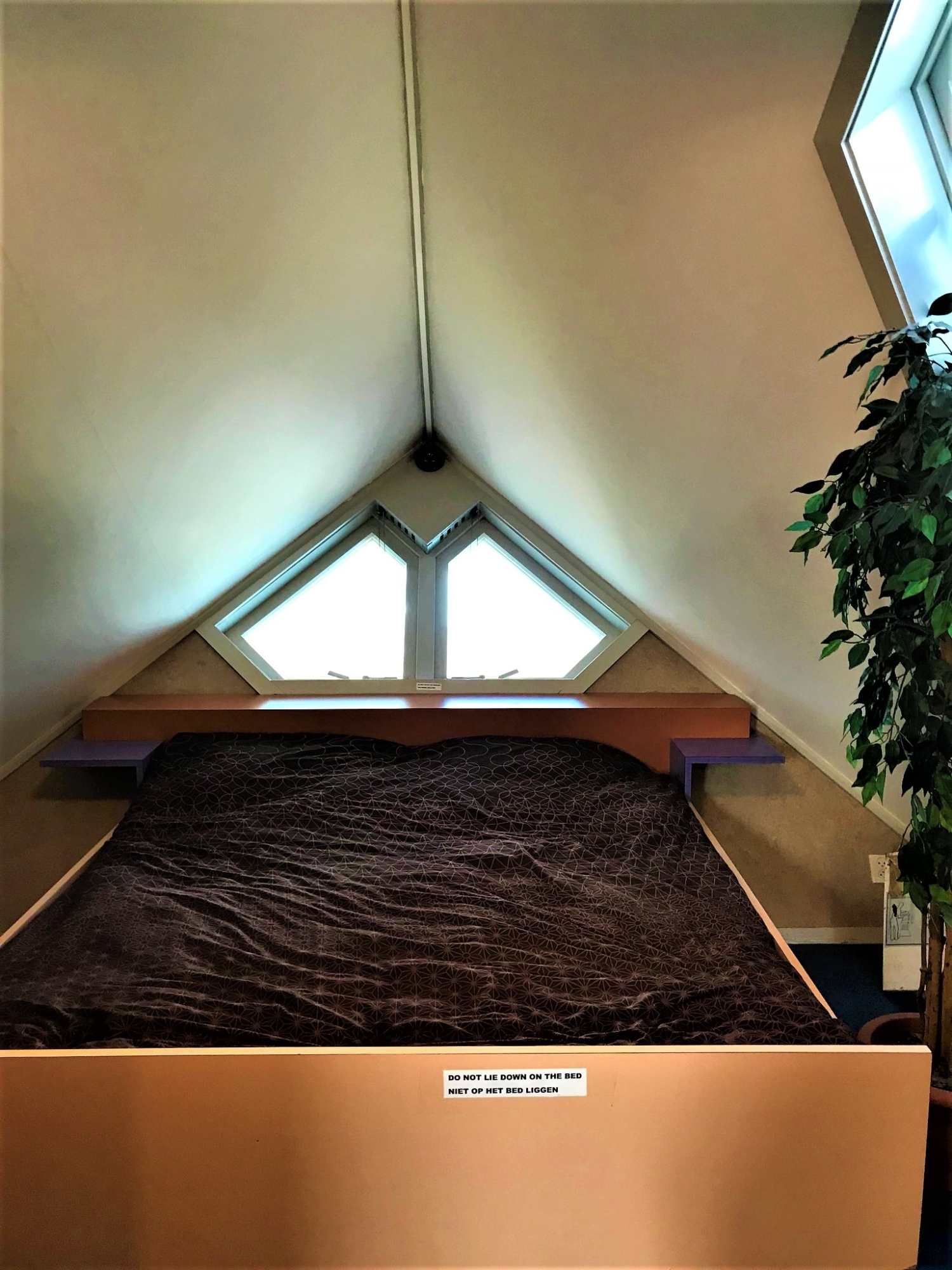 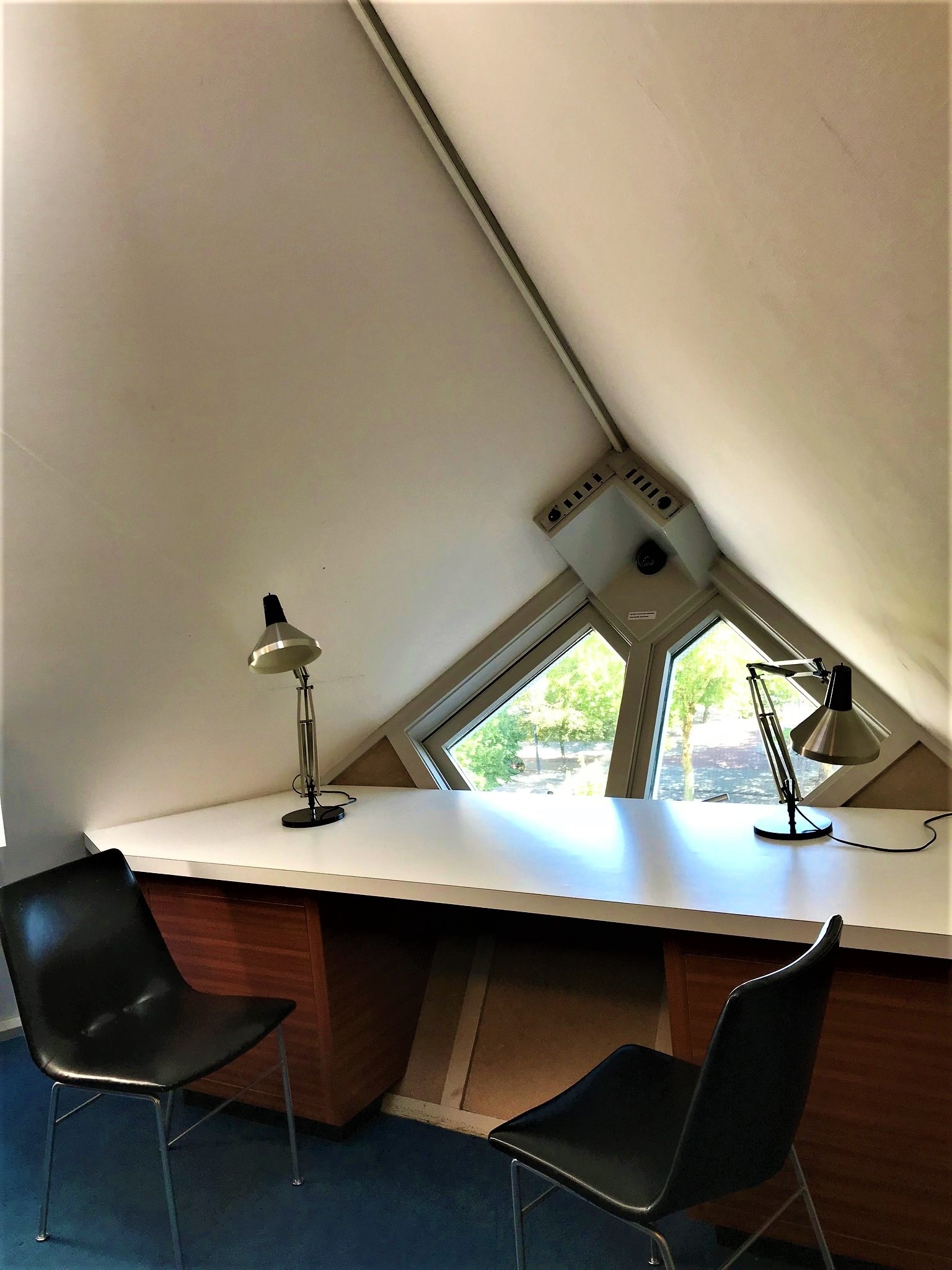 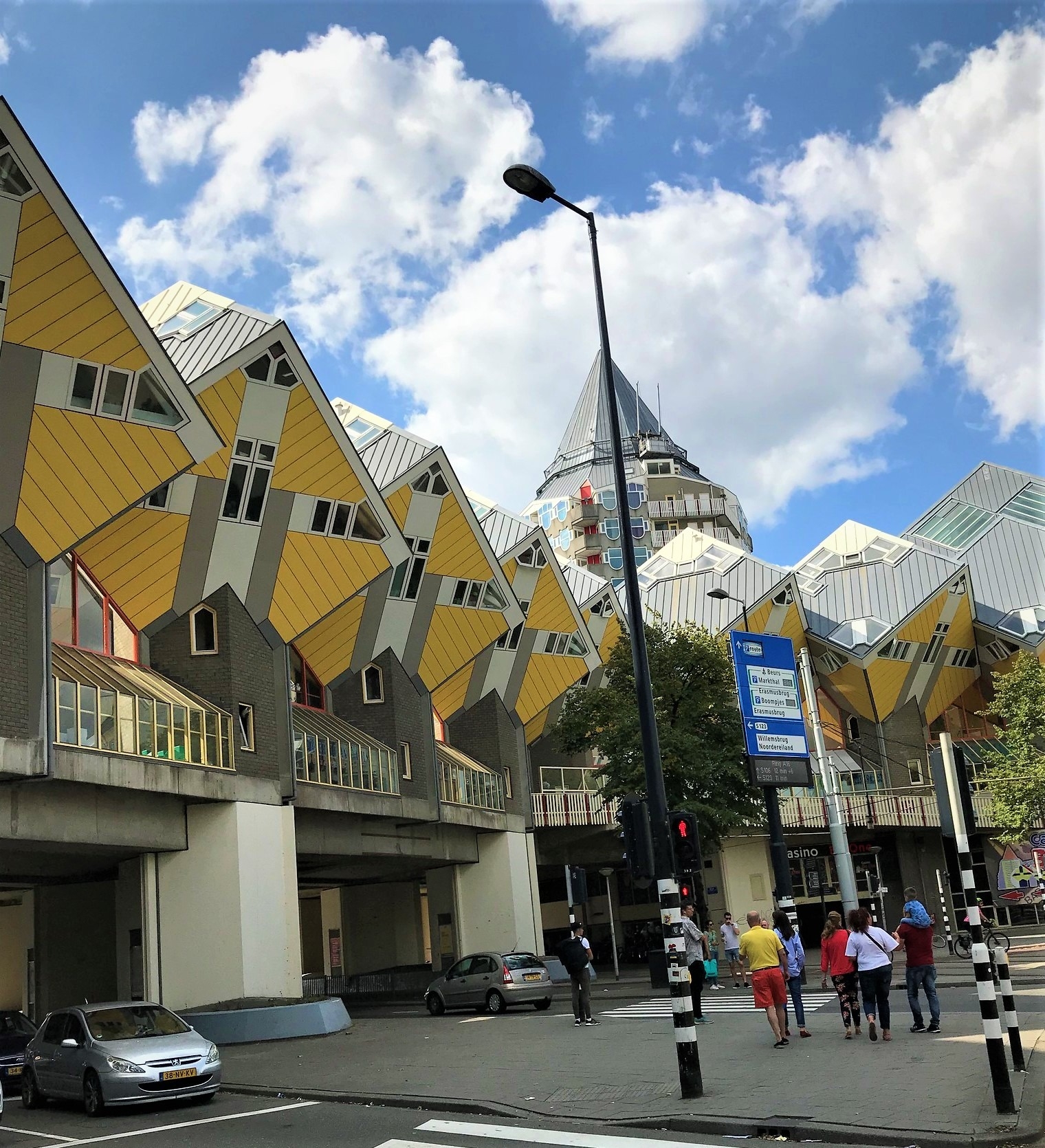 The nearby architecture is as strange as the Cube Houses.  Right next to the Cube Houses is another radical project by Piet Blom, the Blaaktoren (1984), a residential tower known as the “Pencil” because of its pointy top.  Its neighbor, the industrial-looking building with yellow pipes, is nothing else but the city’s central library.  Yet, this area is dominated by an imposing Markthal.  This giant horseshoe-shape building is not your average market hall.  The building was created by the leading Dutch architectural firm MVRDV and inaugurated by the Dutch Queen in 2014.  Inside, one can find a bustling covered market selling everything from Dutch cheese to pickled herring.  The building also has hundreds of offices and apartments, though their existence is not immediately obvious to the visitors.  The entire inner ceiling is adorned with one of the largest artworks in the world, Horn of Plenty (Hoorn des Overvloeds), composed of giant fruits and vegetables floating through the air above. 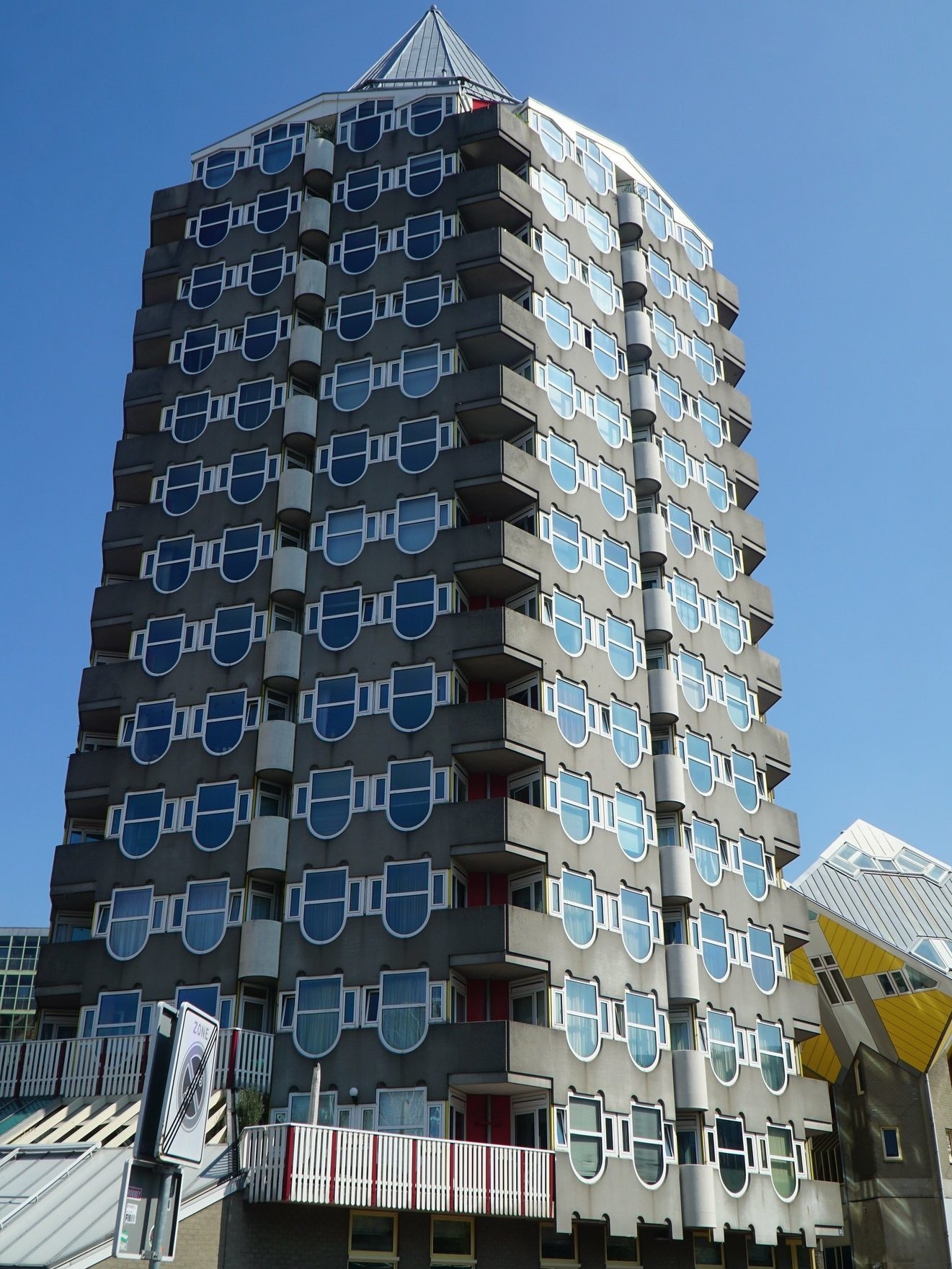 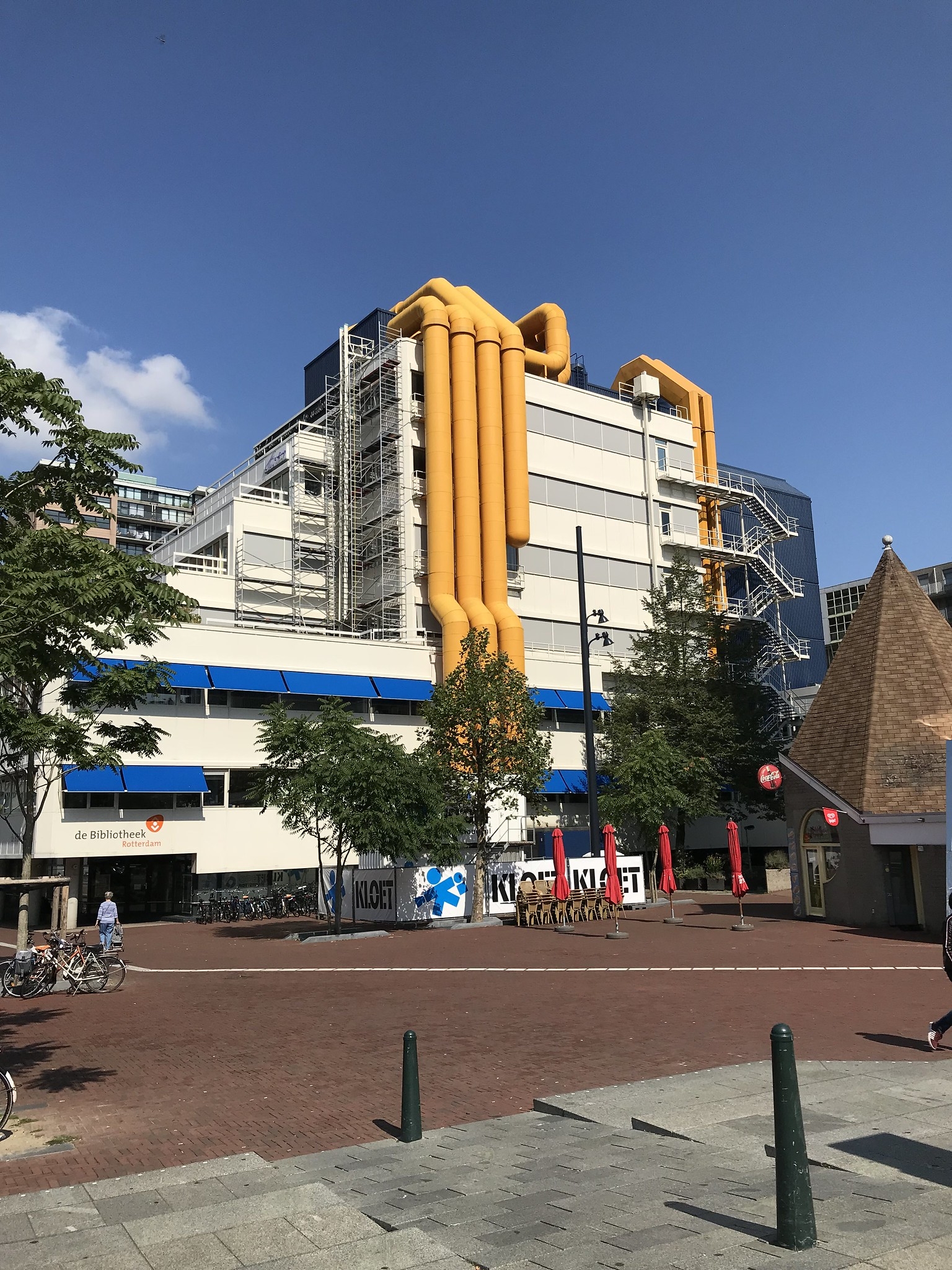 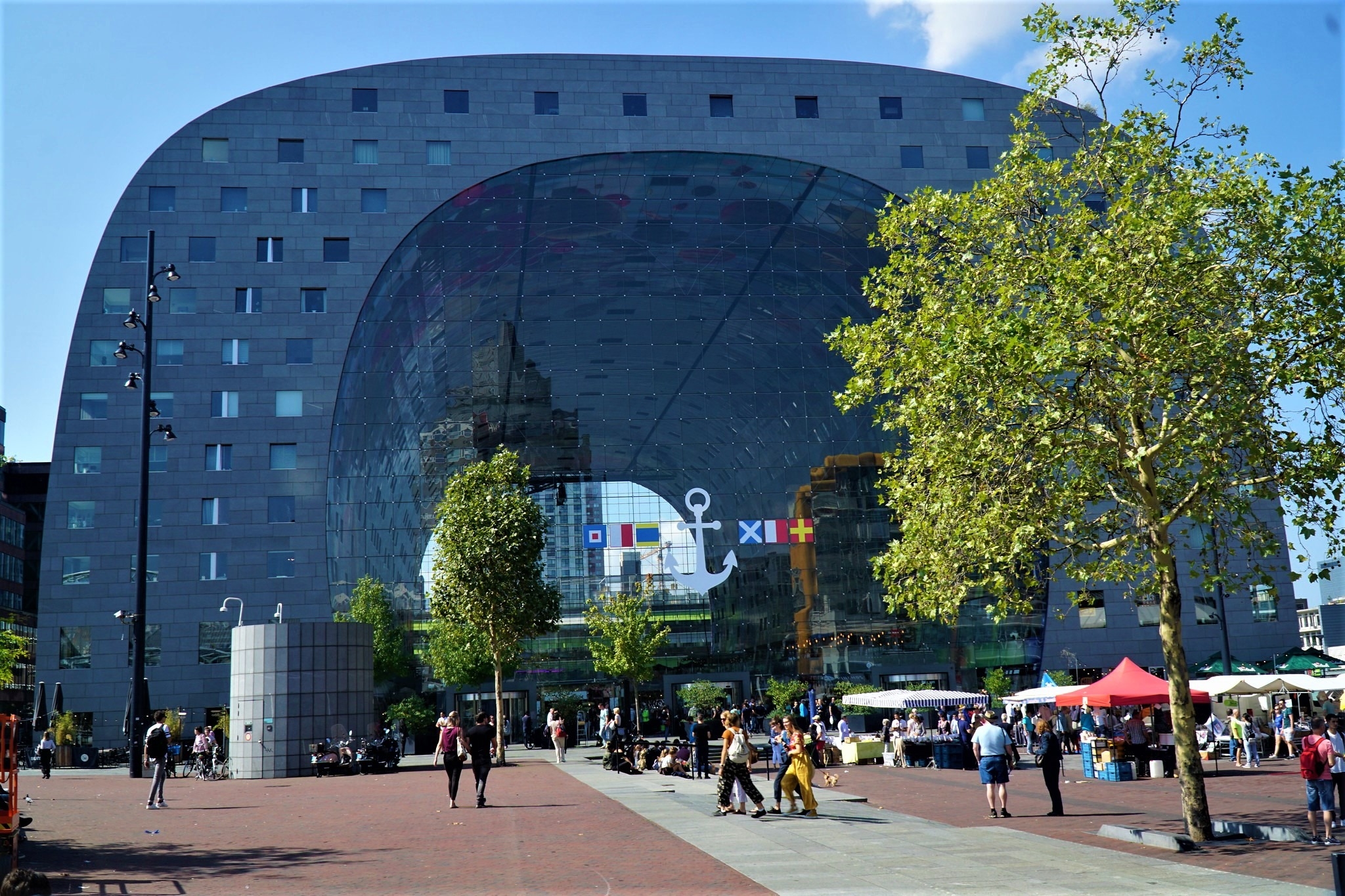 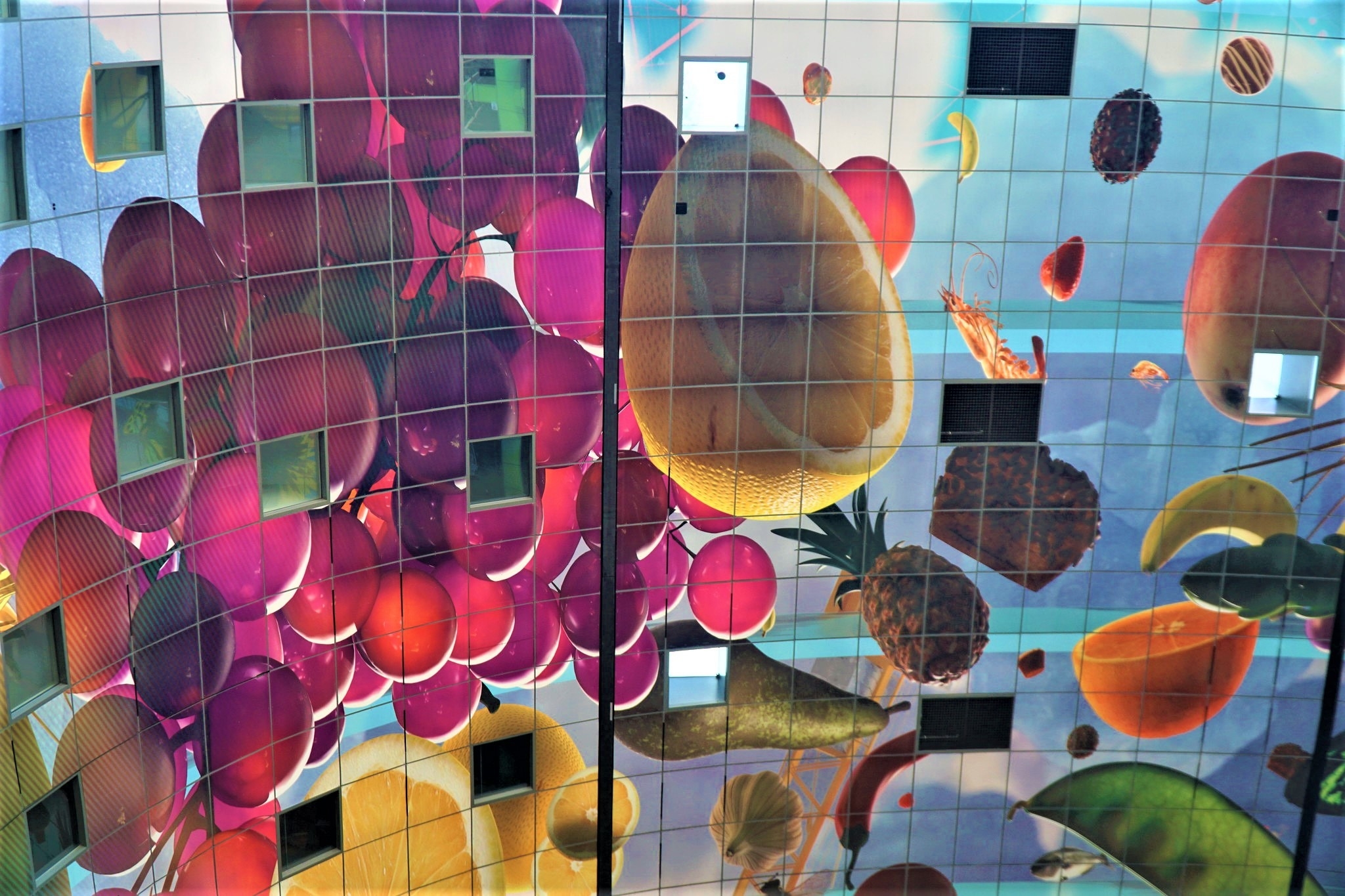 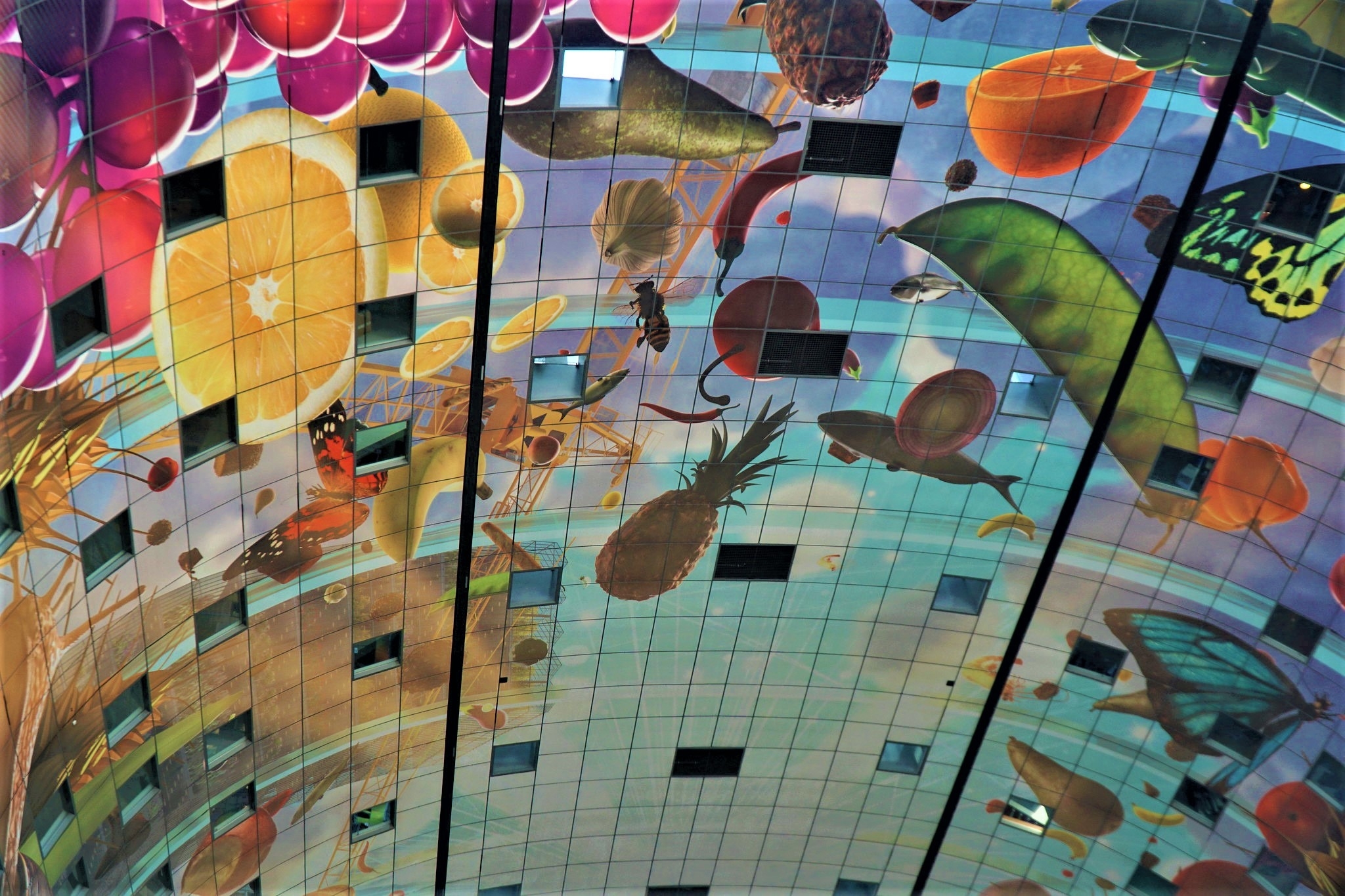 Rotterdam is one of the largest and most important European port cities.  Unsurprisingly, the city’s waterways are also graced by modernist architecture.  One of the iconic structures is Erasmus Bridge connecting northern and southern banks of the Nieuwe Maas.   The bridge is known by the local as the Swan due to its unique design resembling a large elegant bird.  Also by the river is a building with a roof which resembles a giant diving board.  That could really come in handy if Rotterdam ever hosts Summer Olympic Games!  The organizers can save on building new infrastructure and ask divers to compete by jumping off the roof of the building right into the river (just an idea!)  And of course, one of the largest buildings on the river and in entire Rotterdam is De Rotterdam.  This enormous building creates an impression of three separate buildings; yet this is a single building.   The top of it looks like three dislocated and hanging blocks, threatening to tumble off into the river.  As with the Cube homes and many other buildings in Rotterdam, architects who design buildings here like to play with the concept of creating an impression of disjoined and strangely connected parts of the building.  Some may find that the modernist touch of De Rotterdam is also manifested in the building’s unusual resemblance to a ship with three giant sails. Given Rotterdam’s importance as a port city, such symbolism cannot be lost on any visitor of the city. 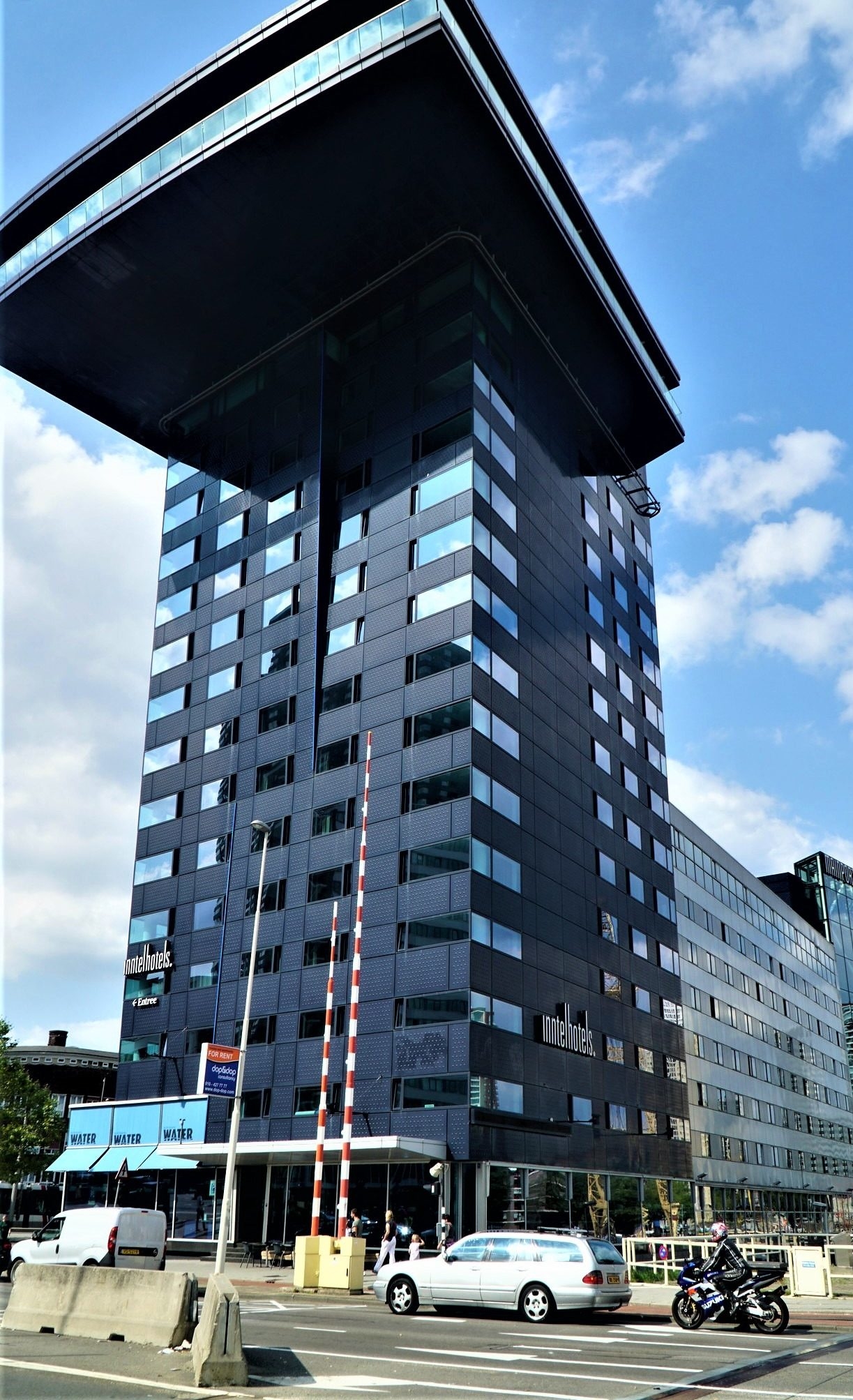 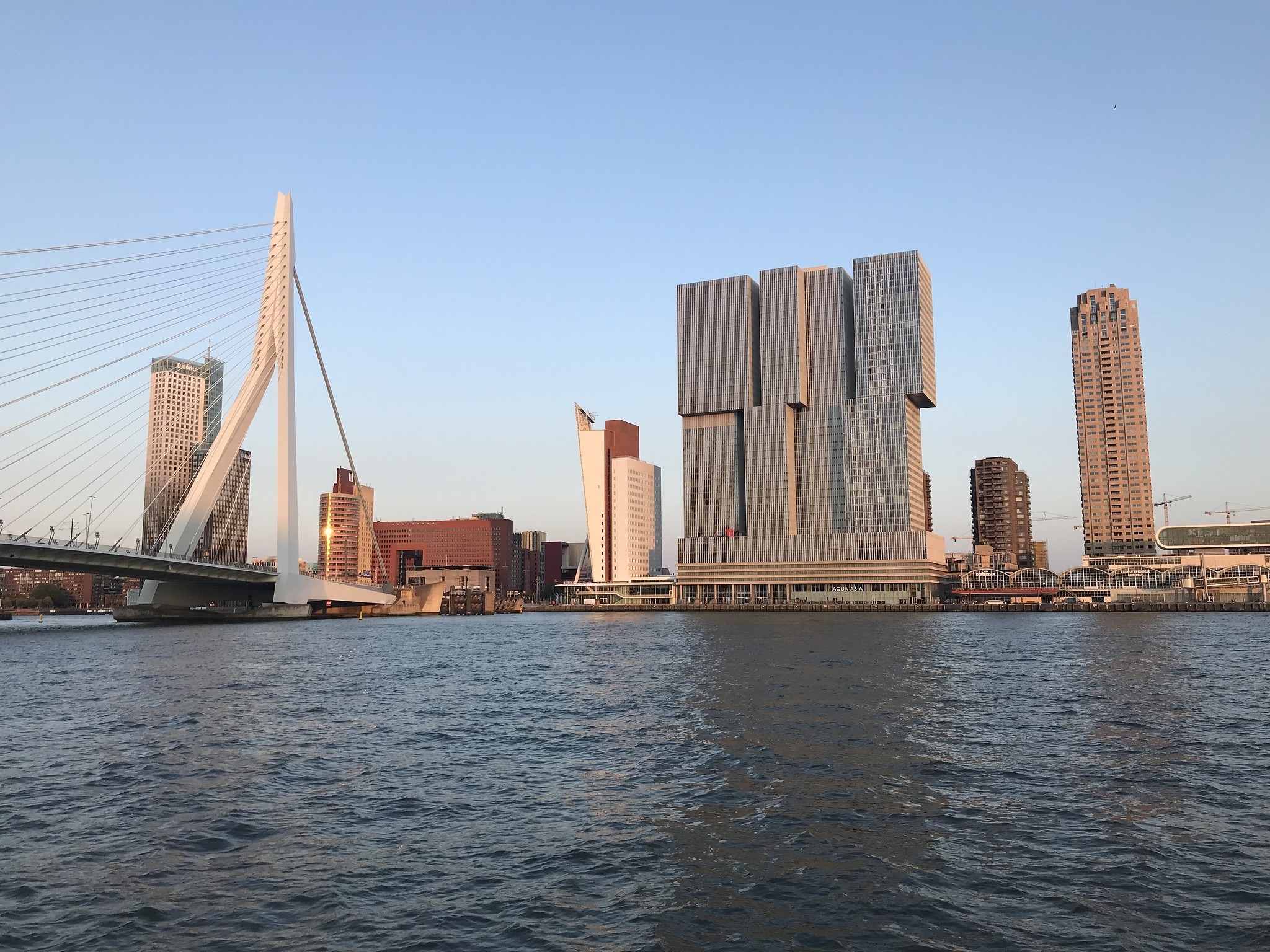 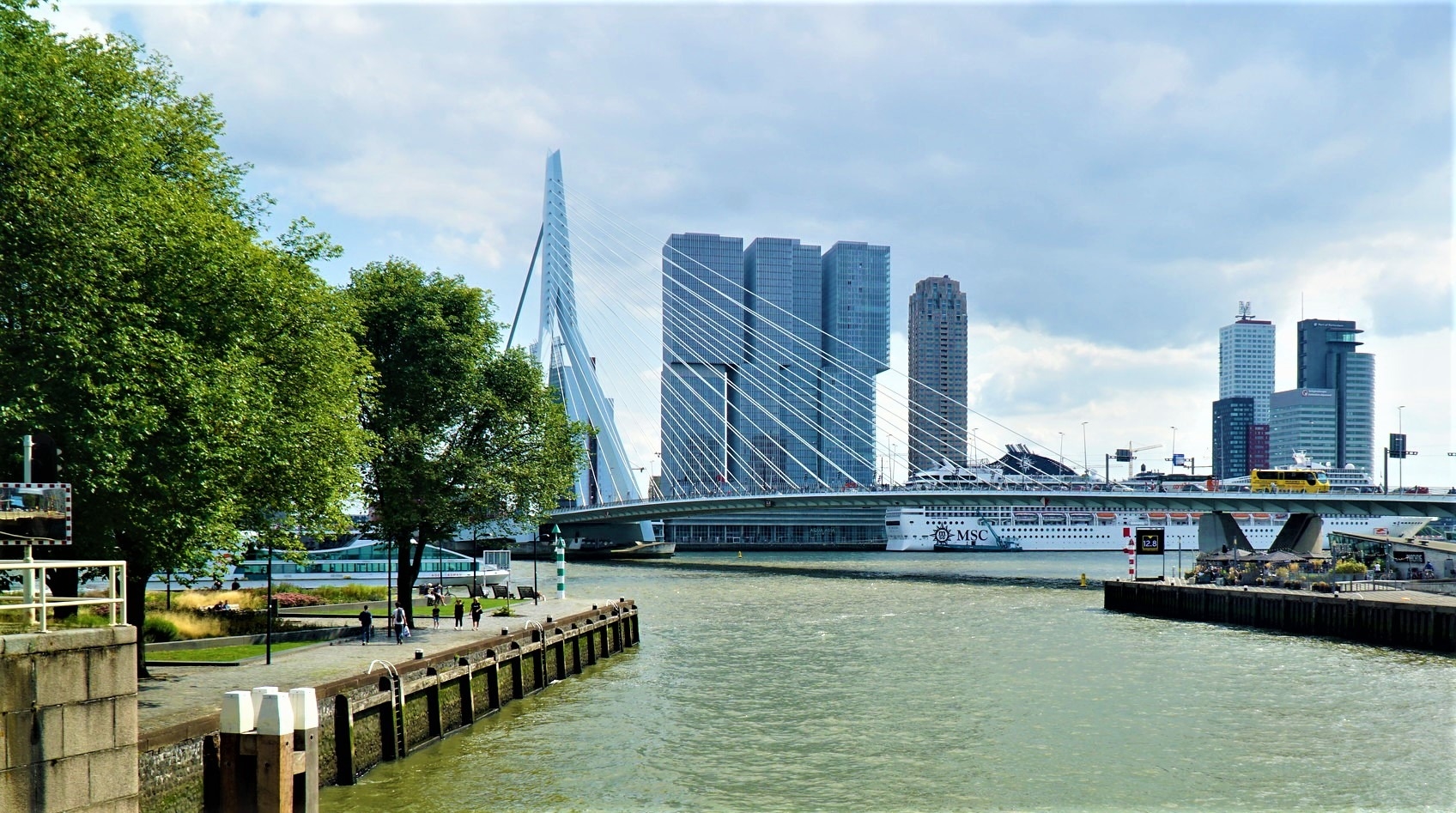 If Rotterdam was not spared of the war destruction, it surely would have looked very different today.  Out of ashes of World War II, with a renewed spirit of modernist creativity, a brand-new Rotterdam sprang into place and will continue its experiments with innovative architecture long into the future.  I find great comfort in this resilience of human spirit in both of my hometowns and in my travels.

Victor is a corporate litigation lawyer who doesn't like yelling at people.