Please start with Part I, where we search for Luis, for the volcano, and for the chance to spend an unforgettable night camping on top of Conchagua Volcano in El Salvador.

As of the date of posting, we couldn’t find any comprehensive information about camping on Conchagua on English-speaking Internet or any guidebooks.  So, if you are here for the details, scroll to the bottom of the post.

“Women first!” called out Luis, opening the back of his giant truck.  In the truck bed, there were some rudimentary benches on one side and plenty of open space on the other.  I climbed in, grabbed a spot on a bench and saved Victor’s seat with my backpack.  Once all the women were settled in, the men were allowed to board.  Everyone in the truck, except for Victor and I, were Salvadoran, mainly tourists from San Salvador.  On our way out of La Union, we stopped by a very unexpected Comfort Inn (first Western chain hotel we saw in El Salvador) and an American family of two older parents and three young adult children boarded the truck (first white tourists we saw in El Salvador).  At the time, we were wondering how in the world they found Luis, but we later found out that they simply booked this excursion through their hotel and paid three times as much as we did.

The trip to the top of the volcano in the back of a truck was exactly what you would expect – bouncy and at times terrifying.  The path (it’s hard to call it a “road”), was initially asphalted, then haphazardly laid out paved stones, then just a dirt lane curving among the trees.  Between being occasionally slapped in the face by tree branches and being thrown around the bench by unexpected potholes, I could just make out the path dangerously arching by a cliff’s edge or narrowing to the point where it was unclear if the truck would even fit. I told myself that this is Luis’ volcano and who better than he to get us safely to the top.  Victor, on the other hand, didn’t seem concerned at all and was low-key enjoying this ride from hell.

Considering the relative hardships we experienced with booking the excursion and the discomfort of the ride itself, I didn’t expect much in terms of accommodations on top of Conchagua.  And this is where I was wrong.  When we finally drove into the camp, I saw multiple buildings including a large restaurant, camping equipment kiosk, indoor bathrooms, and a large wooden platform for the tents.  Turns out we didn’t really need to bring water or food with us, as the kiosk had plenty of drinks and snacks and the restaurant served breakfast, lunch, and dinner. We quickly rented a small tent and two sleeping bags and picked a spot on the wooden platform with a great view of the Gulf of Fonseca and the islands below.  The Gulf of Fonseca is part of the Pacific Ocean and a meeting place for three countries, El Salvador, Honduras, and Nicaragua, who share this fascinating body of water and numerous islands, big and small, scattered throughout.  Who owns what is an interesting question, and territorial disputes even led to a lawsuit that was decided by the International Court of Justice in 1992.  The court awarded two big islands, Meanguerita and Meanguera, to El Salvador, while another big island, El Tigre (Tiger Island), was awarded to Honduras.  El Salvador and Honduras still have an ongoing dispute about who owns a much smaller Conejo Island (Rabbit Island) as the court did not specifically rule on that issue.  From the top of the volcano, we had a beautiful view of the islands.

We popped up our tent, threw the sleeping bags inside, and sat on the edge of the wooden platform, our feet dangling above the slope.  The Gulf of Fonseca shimmered in the fading light, its tranquil waters a hue of silver-blue merging imperceptibly into the distant horizon, interrupted only by a spatter of small islands with green treetops.  As the sun set behind the volcano, we were treated to the sight of Conchagua’s shadow roaming across the water and valleys below us. Every few minutes the light changed as the sun dipped lower and lower, and with the altering illumination, the whole view in front of us changed.  The sky was streaked orange, the water glowed, and the islands were covered with shadow at the coming of the dusk.  We ate our dinner quietly and spoke in hushed tones, as if not to spook the spectacular panorama laid out in front of us. Before crawling into our tent for the night, we noticed that a number of visitors, including the American family from Comfort Inn, departed as they only came for the view of the sunset.  But we had something even more spectacular to look forward to – the sunrise. And sunrise could not come fast enough.  We made a mistake with renting of our equipment when we requested a tent for only two people.  The tent was tiny, barely large enough for both of us lying side by side.  The cramped conditions would not have been nearly as bad if the tent was well ventilated, but there was only one small window and within hours of us falling asleep, the sides and roof of the tent were filled with condensation.  The sweater I was using as a pillow became soaking wet, occasional drops from the tent ceiling landed directly on my face, and the wet walls stuck to me every time I tried to roll over.  We didn’t have a camping mattress or foam, only sleeping bags and were essentially sleeping directly on the wooden platform.  In the middle of the night, I needed to go to the bathroom and very carefully flipped over and unzipped the tent door, trying my best not to wake up Victor.  The zipper got stuck halfway in and I ended up crawling through a very small hole, the wet door flap and walls clinging to me, as I wiggled my way out.  It was essentially a scene directly from Ace Ventura when he crawls out of the fake rhino and onlookers mistake it for the rhino giving birth.  I ended up on the wooden platform, wet and breathless, as if the tent just birthed me.  I then gingerly walked into the dark, painfully aware that the wooden platform was about to end with a sharp two-foot drop.  After successfully descending the platform and making my way to the bathroom, I walked back, shivering in the dark, dreading the idea of having to crawl back into this tent.  I felt a little hypocritical, considering I spent years ridiculing Victor’s dislike of camping trips, and here I was – wet and cold and beaten by the elements, while he blissfully snored away inside the little tent.  I finally squirmed back inside and managed to even fall asleep for a few more hours, despite constantly having to turn from one side to the other on the rigid floor.

I woke up about an hour before sunrise, disturbed by footsteps all around me.  I peeked out of the tent flap and saw a multitude of silhouettes walking out of the darkness towards the tents.  The sunrise sightseeing tour has arrived.  Half an hour later Victor woke up and grumpily reminded me how much he hates camping, despite having slept through the whole night and not even noticing the flood of condensation inside the tent.  We wrapped the sleeping bags around us like blankets and went outside, waiting for the sunrise.  It was just before dawn and the sky was already faintly illuminated with a hue of salmon-orange.  As the sun rose out of the water and the colors exploded across the sky and water, I forgot about the wet tent, the bumpy ride, the crowd of onlookers around me.  It was just me and the ethereal view.  No words can convey what I felt, no photographs can truly capture what I saw.

An hour later I finally tore myself away from the edge of the platform.  The day has dawned, the air was crisp and clear, and the sunlight poured through the tree branches.  We went into the restaurant and ordered a typical Salvadoran breakfast – beans, eggs, fried plantains, and tortillas.  It was our 15th day of the same breakfast “tipico”, but it felt like I’ve never tasted anything like this before.

We rode back down standing on the bed of a small pick-up truck with a few crates of building supplies and about ten people packed in, side to side.  I didn’t even care.  I don’t remember the ride down being nearly as bouncy or harrowing as the ride up, possibly because all I could think of was the sunset and the sunrise. Directions to Conchagua Volcano Camping, if you don’t want to play “Where In The World is Luis” game.

There are other tours that claim to do the same thing, but for twice the price. Where in the World is Luis? 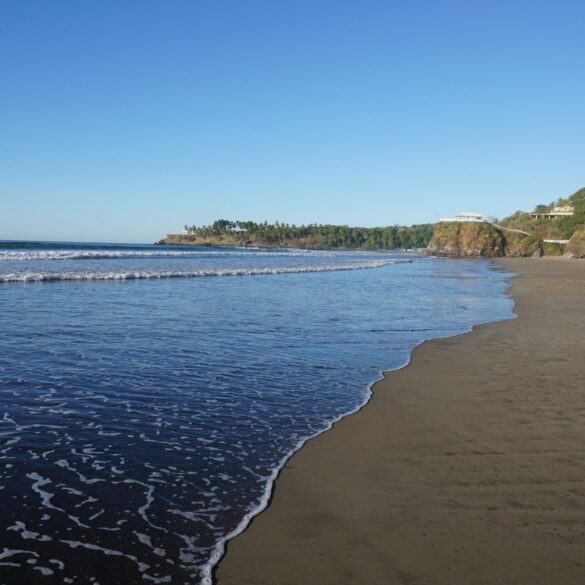 Surf’s Up on Playa Las Flores