The only Peruvian animal I heard of before going to Peru was the llama, also known as alpaca, which later turned out to be two completely different, albeit related animals.  So, I guess, I really didn’t know anything.  So, when Victor mentioned that we were going to see condors fly through the Colca canyon and were going to visit an animal sanctuary, I got pretty excited.  Even though I had absolutely no idea what I was going to see.  That’s just the kind of person that I am.

As we were driving to Colca canyon, the guide explained the difference between alpacas and llamas, with alpacas being smaller, pudgier, cuter with smushed faces and expensive fur, while llamas have longer faces, banana-shaped ears, and attitude for days.  Both are domesticated breeds, and I was surprised to find out that two other camelids, mammals of the camel family, guanacos and vicuñas, both wild, roamed the remote Peruvian landscapes.  From the bus, we saw herds of vicuñas, graceful brown animals, galloping across vast fields, and llamas and alpacas were absolutely everywhere.  It seemed like every stop and every town we visited had native women in colorful garb holding baby alpacas for tourists to take pictures with or llamas lazily grazing by the road.  Even though we usually consider ourselves above the pedestrian attractions of taking pictures with monkeys/elephants/buffalos or whatever dressed-up animal is being peddled in this particular country, a fluffy baby alpaca proved to be too great of an attraction.

“It’s like holding a baby cloud!” I gushed to Victor, as the poor alpaca strained its neck as far away from me as possible, clearly distraught by my enthusiasm.  When it was Victor’s turn to hold the fluffy baby, he was much calmer and got rewarded by a few tentative alpaca kisses. When we finally saw the condors in the Colca canyon, I had no idea I was looking at the world’s largest bird, by combined measurement of weight and wingspan.  They spend the night deep in the canyon and every morning surf the canyon winds with their giant bodies, circling and slowly climbing up and up until clear of the mountain range.  It was an incredible sight.  We were lucky to see over thirty condors rising up from the foggy depths below and circling right overhead.  Depending on the visibility, weather, and generosity of Inca gods, some tour groups have arrived at the same spot over the years and ended up not seeing any condors at all.

The guide told us that condors can live into their eighties, are monogamous, mate for their entire life, and lay only one egg every two-three years.  Not surprisingly, they are currently endangered.  Later, in the animal sanctuary, we had a chance to come face to face with condors, I couldn’t get over just how giant they are.  Even though I knew that they are carrion eaters and do not attack live animals or humans, it was extremely intimidating to approach one perched on a wooden pole, just a few feet away from me. The animal sanctuary of Cochahuasi was full of fascinating animals, most with very unfortunate past lives.  The condors were confiscated from an animal fighting ring where they were forced to fight bulls.  That’s correct: condors vs bulls.  I can’t even begin to imagine what these fights looked like, nor do I want to.  The guide explained that in this violent scenario the condors represented the indigenous people of Peru and bulls the invading Spaniards.

“Who would win these fights?” I asked, completely perplexed at what I was hearing.

“No one.” The guide answered flatly, and I immediately felt overwhelmingly stupid for asking.

There was also a puma, confiscated from a Lima night club where he spent his nights in a drugged stupor so that just as drugged-out partygoers to take puma selfies.  I had just as many questions about this insane scenario but decided to hold back.  There was a toucan with a broken beak who could only be fed mashed-up fruits and couldn’t be released into the wild due to his injury.  There were three spectacled bears, all found abandoned as cubs due to hunters killing their mothers, who were due to be released soon.  A hawk with one eye and an overly friendly forest deer were both not eligible to be released.

“Why can’t the deer be released?” asked Victor, as the deer ran towards us, happily wagging its tail.

“It was raised as a pet by some people.  It’s too friendly.  If we release it back into the forest, it will immediately find people and lick them.”

The deer ran up to us and instantly started licking our hands.

Personally, I would love to visit a forest with such friendly deer, but I am guessing so would a lot of hunters. We saw spider monkeys who used to be kept as illegal pets, casually posing from inside a temperature-controlled enclosure.  We were side eyed by a suspicious vicuña, standing over a small white rabbit.

“Male vicuñas are vicious!” the guide told us, “They stomp everything.  Somehow this random rabbit got inside the vicuña enclosure and the vicuña, for whatever reason, didn’t kill it.  I think they are friends now.  This vicuña is recovering from injury and will be released soon.”

I really wanted to know if the rabbit will join the vicuña on their next adventure in the wild, but it seemed like I already asked enough stupid questions for the day.

Heading towards the exit of the animal sanctuary, we saw a giant cage filled with guinea pigs.  We stopped and waited to hear what terrible things have happened to these poor animals and how they are recovering and whether they are eligible to be released.

“Oh, and these!” exclaimed the guide, “Have you seen these before?”

Victor and I nodded.

“Have you tried them? You must try them! They are delicious!”

Victor and I stared.

“You must try them before leaving the city!  They are served in every restaurant!  Peruvian delicacy!”

The guinea pigs ran around the cage, squealing, in a completely non-delicious way. We noncommittally nodded and slowly backed away from the cage.  To not be seen as complete prudes, we did sample some dung coffee at the sanctuary’s cafe, but only after Victor sufficiently interrogated our guide that the coffee-excreting animals called coatis were not force-fed and force-pooped coffee beans.  The exasperated guide even pulled out pictures of happy coatis sitting on branches and mooching on fruits and coffee beans before we went to buy a cup.  Despite its world-known reputation, we found the coffee to be only average.

But back to the guinea pigs, or as they are known locally, cuy.  Because no matter where we went or what we did, we always came back to the guinea pigs.  Local restaurants featured pictures of their little fried bodies on the signs and menus.  Our taxi driver stopped at a local market to quickly buy a bundle of grass, explaining that it was for cuys he was growing at home.  “Muy delicioso!” he exclaimed. “You taste?”  Our Peruvian cooking class instructor, originally from Lima, explained that guinea pig is not served everywhere in Peru, but mainly in the Cusco region.  “I am originally from Lima,” he said, “I never tried guinea pig until I got to Cusco.  Once I ate it here, I loved it!  It tastes like dark chicken meat.  But, when my parents visit, they still refuse to try it.”  But the absolute peak of Peruvian guinea pig worship happened… in church.  We stood in the Cathedral Basilica in Cusco’s main colonial square, with our mouths hanging open in front of a Last Supper painting depicting Jesus in holy light and solemn-looking apostles.  We’ve never seen Last Supper quite like this one.  In the middle of an almost barren table, there was a golden platter with a large guinea pig, his little fried legs sticking up in the air.  No wonder all the apostles look perturbed – that’s not enough cuy to go around. As adventurous as we usually are in our food sampling (I did try an Alpaca steak after all!), the little cute furry creatures just never looked appetizing enough.  We left Cusco without having tried guinea pigs and without any regrets.

“It’s not like we can’t buy them in any pet store in Chicago!” I told Victor as we were sitting in Cusco airport, “You know… if you ever get a craving to try one…”

Victor gave me a look that I am still trying to decipher. 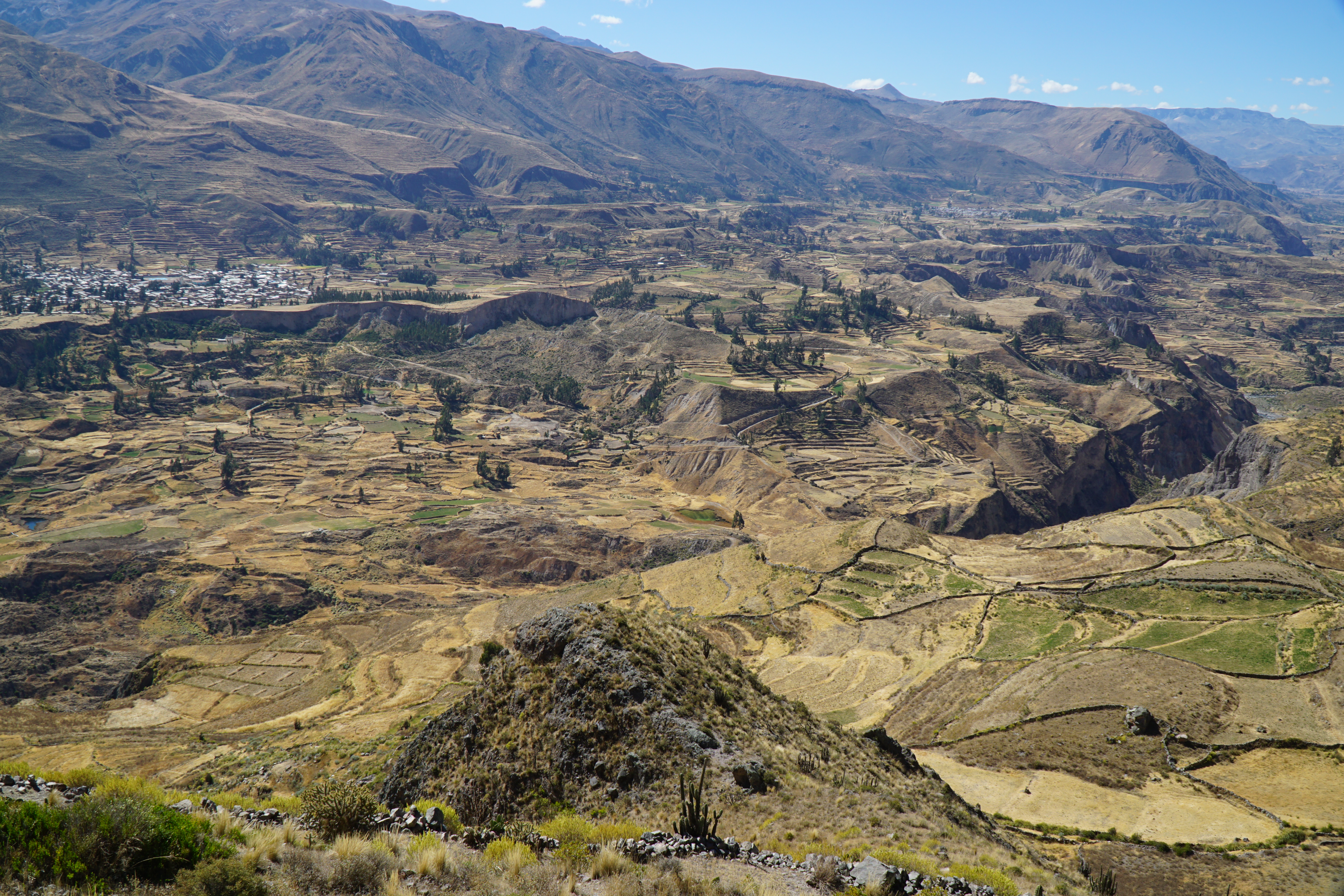