Part I of Adventures in Halong Bay

Through the years of traveling, we have slept in cars, vans, buses, trains, airplanes, a garden shed, a hut, bungalows, a remodeled horse barn, hostels, motels, guesthouses, strangers’ houses, hotels, and once on a lawn in a park (well, that was a nap and not an overnight stay, but still)  We are not picky.  We can fall asleep anywhere.  And as we spend no time inside our accommodations other than to sleep, it really makes no sense to pay anything but the bare minimum.  We are often picky about the location (close to sights, but in a quiet neighborhood), but not about the accommodations themselves.  I would much rather spend the money on access to sights or quicker transportation than extravagant accommodations.  And so, when Victor said, “We are going to get the most expensive cruise available!” when researching Halong Bay overnight cruises, I felt a slight twinge of concern.

Has he grown soft in his old age?  Has he finally succumbed to the “I am an adult, I deserve luxury” mindset so prevalent among our peers? Is he going to buy a Tesla next?

Victor could feel my silent anxiety from across the room.

“Let me explain!” he yelled.

Turns out, there are two different ways of seeing the natural beauty of Halong Bay.  One is to buy cheaper accommodations on a bigger boat and spend two days and one night in a long line of big boats, slowly moving between islands in an orderly line, disembarking at every location with hundreds of other tourists and never having a moment of peace to yourself.  The second is to buy expensive accommodations on a smaller boat, that has permission to travel to more remote parts of Halong Bay, spend your time with a smaller group of people and fewer other boats in your proximity, and visit beaches, caves, local villages, and do kayaking with only a handful of people from your boat.  Having previously visited very busy destinations such as Kyoto and Brugge, we know too well how a large crowd of tourists can ruin even the most beautiful of places.

“The most expensive cruise it is!” I said and involuntarily cringed inside.  It felt weird.

Turns out the cheapest cruises are around $60-$70 per person, while the most expensive we booked was $200 per person.  Overall, not as bad as I expected.  My one concern now was the other passengers.  Who were we going to spend these two days with?  Who else books the most expensive cruise out of all available?  Were these going to be posh upper-class vacationers, who constantly complain about everything?   Are we going to stick out like two sore thumbs among the touring elite?

Once the day of our booked cruise arrived, we were outside our Hanoi Airbnb, waiting to be picked up by the tour bus.  Our Airbnb was in a slightly sketchy part of town, but very close to the Old Quarter where most of the sights were.  We never saw any other tourists in our neighborhood and none of the tourist-oriented businesses such as massage parlors, cafes, and restaurants with English menus, or souvenir shops.  There was a local market, a lot of street eateries, a local barbershop, and one very popular corner of karaoke bars (Vietnamese songs only).  So, when we saw a luxurious van limo crawling down the pothole-riddled narrow street towards our corner, it was no wonder the driver looked as if he was convinced that he took a wrong turn somewhere.  The limo stopped and a very confused driver stepped out.  He stared at us, at the dirty corner we were standing on, and at our well-worn out backpacks.  It was clear he didn’t think we had $400 to split between us, much less to spend per night on a luxurious cruise.  Meanwhile, we stared at the limo, slowly coming to terms with the fact that we really did pay for a luxury cruise and every aspect of it is now going to be slightly out of our comfort zone.

“Victor? Julia?” he asked, clearly believing himself to be mistaken.

“Dragon Pearl Cruise?” I asked, in the same tone. After getting comfortable in our individual reclining leather seats and sipping chilled alpine water out of complimentary glass water bottles, while connected to complimentary WiFi, our limo made one more stop to pick up our guide before the three-hour drive towards the bay.  The smiling young Vietnamese woman eloquently spoke to us in absolutely perfect English, without the common Vietnamese accent which usually drops the last part of the word (pronouncing “ri” instead of “rice”).  She sounded as if she was educated at the highest institutions in Europe.

“Her English is better than ours.” Victor sarcastically remarked in Russian to me.

After a short shopping stop disguised as a bathroom break, we arrived at the port and were herded out to the dock to board our boats.  Dragon Pearl boat turned out to be a beautiful red mahogany boat with intricate dragon carvings and beautiful brown sails.  Out of 11 cabins in the boat, only 8 were filled due to several pre-bookings moving to a larger boat.  Fewer people on the boat was great news for us as it meant even less crowding on the boat and excursions.  I was relieved to see that everyone seemed friendly and no one showed up carrying a tiny dog and yelling at their personal butler.  There was one elderly English couple, a middle-aged French gay couple, two very young couples from Singapore, two late-twenty-year-old couples from Germany, and one other couple from the US.  Victor, who somehow ended up peeking at the cruise ship's passenger list, told me that the other US tourists were the same age as us and were from Portland, Oregon.

Our cabin was decorated in handcrafted teak and oak with beautiful ceramic plates hung on the walls.  Out of all the ways to instill confidence in passengers that the sailing will be smooth, hanging fragile wall decorations all over the boat probably tops the list.  Inside a gorgeously carved mahogany wardrobe, I discovered two silk robes, decorated with Chinese dragons.  Immediately, my mind was full of so many shenanigans.

“I am going to do a Titanic pose by the railing…”

“Is it weird to put that robe on top of clothes?  Should I be naked underneath?”

“NO!” screamed Victor and started pushing me out of the cabin, while I was still dressed and robe-less.

We climbed up on the second-level deck and stood above the bow of the ship, a beautiful view of hundreds of rock islands around us.  All decks of the boat were completely empty, as the fellow passengers were still settling into their cabins and possibly arguing over the correct use of robes. We took pictures and gazed around, talking in hushed tones, as if afraid to break the magic surrounding us.  About thirty minutes later, we were joined by an older English woman, who also came out to the top deck to take in the view.  After a round of introductions, we chatted about our Vietnam experiences and thoughts, shared our favorite travel destinations, and discussed plans for future adventures.  She and her husband were retired, avid travelers, and were used to going around the world in a bit more comfort than us.  One of the experiences she shared reaffirmed my belief that frugal accommodations can often be smarter than luxurious ones.  She told us that the very first 5-star hotel they checked into in Hanoi had a large rat that was running around the front lobby.  She and her husband were appalled and pointed out the rat to a very helpful concierge who immediately reassured them that this particular rat didn’t live at the hotel, but rather “next door”.  As Victor and I laughed at the idea of the “visiting rat”, she went on to point out all the issues at this and other hotels they stayed at, such as “problematic bathrooms”, “outdoor noise”, and so on.  It’s understandable why she was upset.  They paid good money for a high-end hotel and it didn’t live up to their expectations.  Unfortunately, there is only so much even the best hotel can do when it’s located in a city such as Hanoi, within a developing country.  There is no way to prevent rats from entering a building when the entire city is full of rats.  It’s hard to prevent outdoor noise in a city known for high levels of noise pollution.  There is no way to make sure that the hotel has constant water or electricity when the city’s utilities are unstable at best.  When we rent a $7 per night bungalow, we expect rats, outages, and noise.  It’s basically written into the contract with invisible ink.  We don’t get upset because we get what we paid for.  On the other hand, paying for an expensive hotel and getting all the same things is infuriating.

It was interesting to see that my preconceived notions of who a “luxury traveler” was were so quickly dispelled by this very pleasant woman, who even when complaining, managed to remain lovely and upbeat.  As we continued chatting, I saw someone else on the lower deck, heading toward the bow of the ship.  It was her husband, a tall grey-haired English gentleman, wearing nothing but a silk robe, extensively decorated with Chinese dragons.  He walked up to the front railing, took a deep breath, and spread his arms out.

I gasped and with my mouth still open, frantically pointed at the man below, while wordlessly staring at Victor, my eyes full of rightful indignation.

“He is not singing!”

Suddenly, I realized that the woman behind us had no idea why I was freaking out over her husband.

“I wanted to do the same thing!” I complained to her, “But he wouldn’t let me! He said the robes are for indoor use only!”

“You were going to be out here naked with nothing but a robe!” interrupted Victor.

“I am not naked!” called out the man below and to show us, started to undo the robe belt to reveal an undershirt and boxers beneath.

“Well, to be fair,” laughed the Englishwoman, “I absolutely would not have let him do this, had he checked with me first!”

The woman and Victor exchanged meaningful gazes.  The Englishman and I nodded at each other in joint camaraderie.

The ship kept on sailing. P.S.  One thing I realized when writing this post is that while we took a thousand pictures of the islands and the bay,  there are exactly zero pictures of the limo, the decorated boat cabin, silk robes, or any of the luxurious features of the cruise.  I guess these indulgences really aren’t important to us.

Adventure in Halong Bay continues next week with “Murder on the Dragon Pearl”!

Part II: Welcome to the Jungle … on Motorbikes! 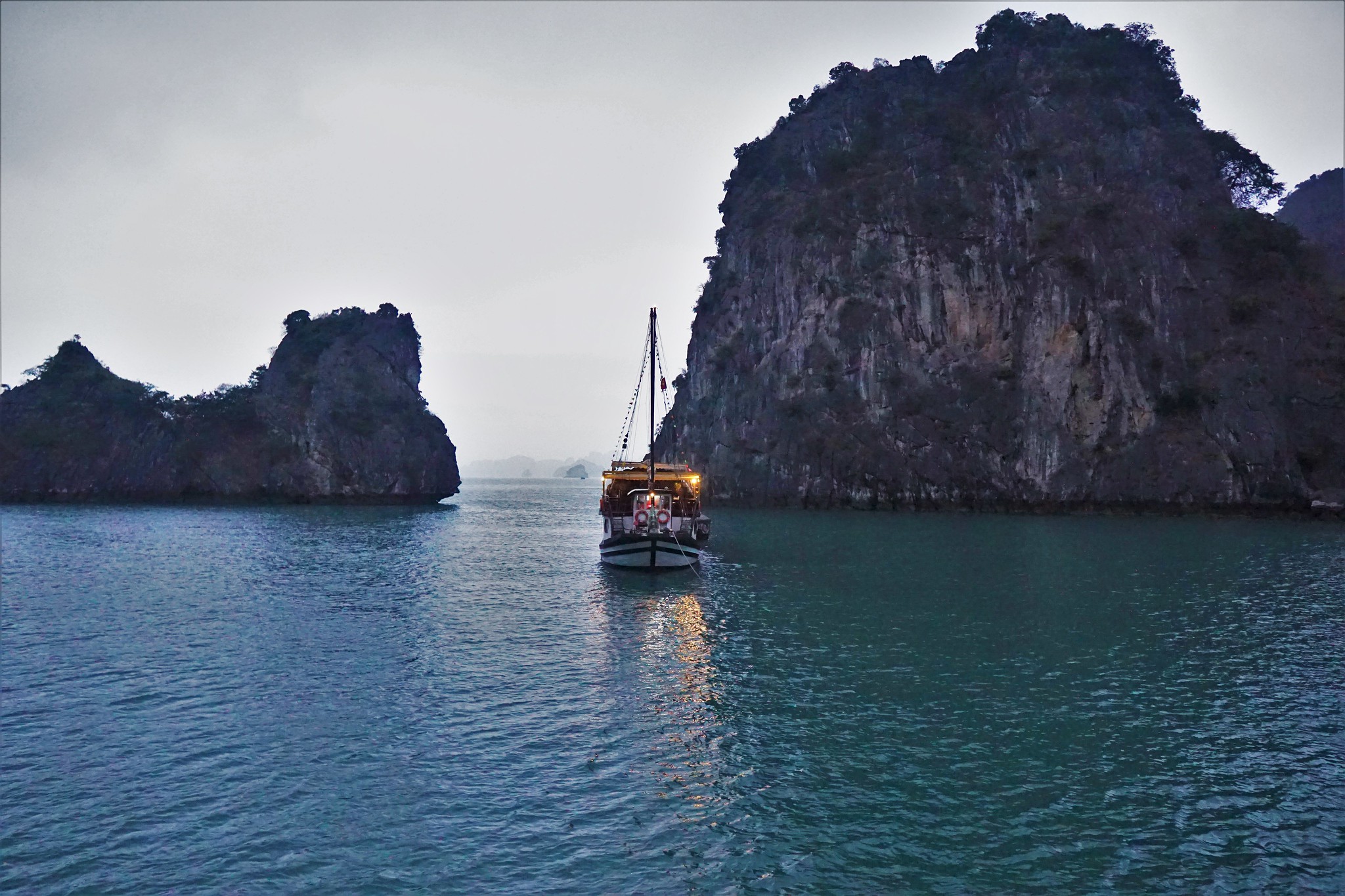 Murder on the Dragon Pearl