Our condo is a museum of our never-ending globetrotting.  African masks, religious statues, souvenirs, and mementos from all over the world constantly fight for shelf space with the cats.  The more we travel, the more things we bring home.  Our minimalist way of life directly conflicts with the constant desire to bring back even a tiny part of every foreign culture.  For the most part, we try to avoid the most touristy trinkets and usually buy only those things that can serve as a quintessential reminder of the countries visited.  You can’t think of a more Argentinian thing than a mate cup or a more Japanese thing than a woodblock print.  We are at the point where we can no longer display everything that we have accumulated over the years (and continue to accumulate) and now must rotate the collected pieces.  I can’t describe in one post everything that we brought back from our journeys (maybe we should do a couple of posts on this topic?).  Today, I will highlight just a couple of special items that we found across the globe.

We are not religious, but we have at least one shelf dedicated to religious statues and art.  In many countries, especially in the East, religion is the key aspect of people’s lives and is often reflected in art and everyday objects.    In our collection, we have a beautiful blackwood Buddha statue from Thailand, a copper Ganesh statue from India, and wooden plaques for writing wishes to Shinto gods from Japan.  One of the most interesting religious pieces we own is from Cambodia -- a wooden naga statue or a Buddha sitting on a tangle of snakes.  Before visiting Cambodia, we saw similar stone statues at the Art Institute of Chicago in the Asian section and other art museums across the U.S.  But it is only when we got to Cambodia, we realized how much Cambodian love their snake gods.  The National Museum of Cambodia in Phnom Penh was filled with old, weathered naga statues.  Outside the museum and throughout the country, there were ever-present seven-headed nagas guarding entrances to temples.  The obsession with snakes is explained by the local religious belief that Khmers (present-day Cambodians) are descendants of the nagas, who were half-human and half-snake.

We bought our naga statue at a local souvenir market, where Julia, for the first time in her traveling career, suffered a resounding defeat at the hands of the local sellers, who refused to negotiate the asking price.  Trying to get a better price but getting nowhere with the seller, Julia dramatically walked away, dragging me along.

“This is Asia,” she hissed. “I know how it works.  They will chase us and lower the price. Keep moving.”

As we were leaving, from the corner of my eye, I saw that the woman who was manning the souvenir stall just shrugged her shoulders and ignored our theatrical departure.  In the end, the descendant of the snake gods won because we returned 15 minutes later and paid the full price. One of the most stunning pieces in our collection is a decorative soapstone vase from Ouro Preto.  This former mining town in the beautiful region of Minas Gerais boasts magnificent Portuguese Baroque architecture and is a UNESCO site.  Back in the day, when the mines operated at full capacity excavating gold, diamonds, and iron ore, the town was one of the wealthiest in Brazil.  The mines have been long closed, and Ouro Preto is now geared mostly toward tourism.  The nearby quarries, however, still produce soapstone, a very soft stone ideal for stone carving.  As a result, the town has a unique, open-air Soapstone market.  We browsed the rows of tables filled with exquisite pieces, talked to artisans, and finally settled on a gorgeous vase with a flower pattern with hummingbirds.

Bringing the vase home was also memorable.  Trying not to damage the vase, we took it on the plane as a personal item.  As we approached the gate, an airline representative pulled us aside to ask a few security questions.  When he asked if we had anything on us that can be used as a weapon, for some unknown reason, Julia decided that it was a good time to engage in a metaphysical discussion.

“If you think about it, anything can be used as a weapon.” She mused.  “Look, I think I can probably kill someone with this vase.” She noted casually pointing to the vase I was holding.

The agent was shocked.

“But … you are not planning to kill anyone with this vase, are you?” whispered the pale agent in a cautious voice.

Somehow, they allowed us to board that plane and take the vase with us. One of our favorite souvenirs of all time is a small, wooden Pucara statue.  Traveling through Peru, nearly every souvenir shop had statues of two cute bulls tied together with a ladder and a cross in between them.  These pairs of bulls were of different sizes and painted in different colors. When we initially saw them, we did not think much of them.  However, very soon, we realized how important these statues are for the people of Peru.

The night before going to Machu Picchu, we stayed in the town with the tongue-twisting name, Ollantaytambo, known for its lesser-known Inca ruins.  Our Airbnb room in the town center was beautifully decorated and had an imposing statue of the bulls on the nightstand.  After settling in the room and taking an enormous number of pictures of the statue, it was time to check out the view from the room. I opened the window and the first thing I saw was … a pair of wooden bulls (!) mounted on the roof of the house right across from our house.  I looked at another house, and it had a similar statue mounted on the rooftop. In fact, most of the houses had these bulls on their roofs.  The bulls were apparently more than just a cute souvenir from a gift shop.  We did a quick Google search and learned that these statues are known as Pucara and are one of the symbols of Andean Spiritualism.  According to the Andean traditions and beliefs, people place them on the roofs of their houses to bring protection, health, and happiness to the dwellers of the house.

The next day, after spending an incredible afternoon exploring the wonders of Machu Picchu, we bought a pair of Pucara bulls that now resides inside our apartment.  We thought about asking our building’s administration to mount them on the roof of our apartment building, per Andean traditions, but figured that it was a long shot to get their approval.  In any event, according to Peruvian traditions, it is also fine to keep a Pucara statue inside the house. With the holidays fast approaching, we thought it would be appropriate that the last post of the year would be something about gifts, even if it’s the ones we buy for ourselves!

Merry Christmas, Happy Holidays, and Happy New Year to everyone! 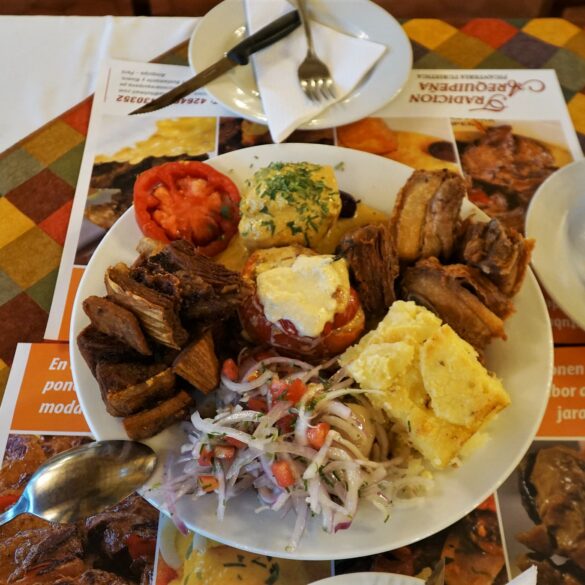 An Honest Conversation in Havana