As we woke up on the morning of the fourth day of our France trip, I was both apprehensive and excited. One of the main reasons why we came to Normandy was to tour the D-Day beaches. My internal history geek was waiting for this day in great anticipation. Before this trip, I read probably the best book on D-Day, “The Longest Day” by Cornelius Ryan, and could not wait to start exploring the D-Day sights.  At the same time, exploring this historical area where so many lives have perished was going to be hard.  We were visiting around a special time: the U.S. Memorial Day weekend and just days from the 75th anniversary of D-Day. To do this place justice, we hired a semi-private day tour with a very reputable company Bayeux Shuttle. Although we had to shell out $250 for both of us, the trip was well worth the money. Touring all five D-Day beaches in one day was not possible, and we settled on visiting the American sector (Utah Beach, Pointe du Hoc, Omaha beach, and two towns liberated by the U.S. troops). All in all, the trip exceeded our expectations and in the future, we want to return and tour the UK section (Sword beach and Gold beach), Canadian section (Juno beach), as well as other surrounding D-Day sights and museums.

We were picked up near Bayeux cathedral in the city center. Our group of about 12 people was a mix of U.S. families and couples with an interest in military history. Immediately, I felt a close bond with these strangers who would take a day out of their French itineraries to learn about one of the most crucial operations in WWII. The guide assigned to our group was a bookish guy in his early 30-s named Scott. Scott told us that he had been so fascinated with the D-Day history that he moved to Normandy from his native Wales several years prior and stayed.

The weather was not pleasant. It drizzled the entire morning and most of the day with gusty winds relentlessly hitting us in the face. Usually, we would not be thrilled to have such weather conditions, but for this particular tour, the conditions were perfect as they were close to those that the Allied forces had to deal with during the invasion on June 6, 1944.

After everyone boarded a minibus, we left Bayeux and for the next 45 minutes rode to a little town of Sainte-Marie-du-Mont. As we were riding in gloomy and rainy weather, we passed a German war cemetery with rows of solemn black German crosses. Scott told us that despite Germany losing the battle and being on the wrong side of history in the war, relatives of German soldiers still visit the cemetery as a place of remembrance. Later in the day, with the sun out and brightly shining, we visited the American war cemetery by Omaha beach with perfect rows of glowing white crosses and occasional Stars of David. The symbolism could not escape us with the colors of tombstones and the weather conditions that day clearly denoting the good and evil of the opposing sides of the war. On the way to Sainte-Marie-du-Pont, Scott described the start of the D-Day operation with the U.S. paratroopers of the 101st and 82nd Airborne divisions being dropped off in Normandy in the middle of the night, just hours before the naval attack on the beaches began. Due to poor weather, most paratroopers missed their marks and were scattered throughout the Norman countryside. The Germans, fearing an invasion, had intentionally flooded the surrounding swampy fields that we were passing in the minibus and many of the U.S. paratroopers jumped to their death by drowning in these flooded plains. Those paratroopers who did not perish were hopelessly lost and could not immediately connect with people in their groups. As one paratrooper commander later described, once he landed and could not find his men, he quickly realized that he could only give commands to surrounding him Norman cows.

Sainte-Marie-du-Pointe is a little French town with a typical Gothic cathedral in the center and a monument commemorating D-Day events. The town, just 3 miles from the nearby Utah beach, had strategic importance during the D-Day operation securing a safe passage for the U.S. troops invading from the sea. Standing by the cathedral’s walls, Scott described the fight that ensued to take the town and how the U.S. paratroopers secured it before the invasion from the sea began at dawn. Inside the cathedral, bullet holes provided vivid evidence of the fighting that took place here.

We then drove to Utah beach. That place is incredible as it barely changed in the last 75 years. The beach looked very peaceful and serene, with fishermen harvesting oysters in the distance.  Scott, continuing narrating the events of D-Day, pointed out that initially U.S. troops were supposed to land not here but hundreds of yards west, but the mistake was a happy accident that made Utah beach the most successful and the least bloody during D-Day. Unlike Omaha beach, Utah beach does not have a tall bluff and was not heavily defended by the Germans. With very limited casualties, U.S. troops landed here and practically marched into the continent. Driving back inland through Norman countryside with tall hedgerows providing natural boundaries between land parcels, we soon reached another little town, Saint-Marie-Eglise. This town, like Sainte-Marie-du-Pont, was liberated by the U.S. paratroopers hours before the start of the attack from the sea. Standing in the center of the town’s square, Scott’s eyes lit up and he excitedly, as if he was doing it for the first time, described the events that took place here at the midnight of June 6, 1944. That night, one of the barns in the town center caught fire after an incendiary bomb had been airdropped on it and all residents were out trying to put it out. The German soldiers were here as well trying to keep the situation under control. All of a sudden U.S. paratroopers started to drop from the dark sky into the town’s square. The barn, fully engulfed in flames, was illuminating the landing paratroopers making them easy targets for the startled Germans. Some of the U.S. paratroopers landed in the canopies of nearby trees that still stand today and were immediately shot by the Germans.  One of the paratroopers who landed here, Private John Marvin Steele, was knocked unconscious when he hit the roof of the church with his parachute tangling up in the church’s steeple. The limp, motionless body of Steele was dangling from the steeple and the Germans did not even bother to shoot him as he looked very much dead. He was taken off the steeple by the Germans hours later and made a prisoner.  Steele later escaped from captivity and went to fight the war through the end, becoming an honorary citizen of Saint-Marie-Eglise after the war and regularly visiting the town until his death in 1969. An effigy of Steele tied to a parachute is now hanging from the church’s steeple providing a daily reminder of the valiant efforts of the U.S troops. Inside, the church is adorned with colorful stained glass windows depicting Virgin Mary who is surrounded not by Biblical angels but by U.S. paratroopers descending from the sky. After grabbing a quick lunch of French pastries and coffee and strolling a little bit more around the center square, we boarded our mini-bus to drive back to the coast, to one of the infamous landing spots of D-Day, Pointe du Hoc. Standing on top of the cliffs overlooking the English Channel, the landscape surrounding us with its deep craters resulting from heavy artillery fire, was surreal and resembled the Moon's surface. The cold winds were ferociously hitting us in the face, but this uncomfortable weather was nothing in comparison to what U.S. Rangers faced here. We gathered in a semi-circle around Scott and listened to him describing U.S. troops’ heroic actions of scaling and taking these 100-foot vertical cliffs on the morning of June 6, 1944, seizing German artillery, and then defending these positions for days. Standing on the edge of Europe, by the monument in the form of an oversized Ranger knife atop a German concrete bunker, I was never prouder to be an American than here.

Omaha beach that we visited next was the bloodiest of all five beaches during D-Day.  A tall bluff overlooking the beach provided a clear advantage to the defending Germans as they could shoot the invading U.S. troops at point-blank from a higher point.  The beach was also full of German mines and defensive enforcements that made any advancement on the beach by U.S. soldiers extremely difficult.  Referring to U.S. troops as “our boys” throughout the day in his slight Welsh accent, Scott described the heroism of U.S. soldiers at Omaha.  We just stood there silently and listened to him talk about the unfortunate circumstances of the start of the naval operation and how the first waves of the invading U.S. troops at Omaha were simply slaughtered but kept pushing in.  “There are two kinds of people who are staying on this beach: those who are dead and those who are going to die.”  This phrase famously uttered by Colonel George Taylor who was rallying his troops under the relentless fire from the Germans, and trying to get them off the beach as soon as possible, perfectly summarizes the events that took place here on the morning of June 6, 1944. Nearly 2,000 American lives were lost here, but by the evening, the beach was secured, and the liberation of Europe carried on. Omaha beach is a truly profound place.

We finished the day by visiting the U.S. war cemetery overlooking Omaha Beach and the English Channel with thousands of neat rows of white crosses. Some parts of the cemetery were closed in preparation for the 75th Anniversary celebrations but we had plenty of ground to cover, walking around and reading the names of the U.S. soldiers laid to rest here. The U.S. flag was honorably lowered and folded at a daily sunset ceremony which was a fitting conclusion to our trip to Normandy and the start of our trip back home. I’ve read books and watched movies about World War II, I studied the topic in school and saw black-and-white photographs. And then I stood there, under the same drizzling rain on the heavy sand of the beach with waves crashing on the shore, imagining ships in the fog and soldiers coming out of the water, as they did 75 years ago. It is a feeling like no other, suddenly being physically connected to a day in history, to a place in time, to understand in an intimate way the number of lives lost, the sacrifices made, the victory against all odds. 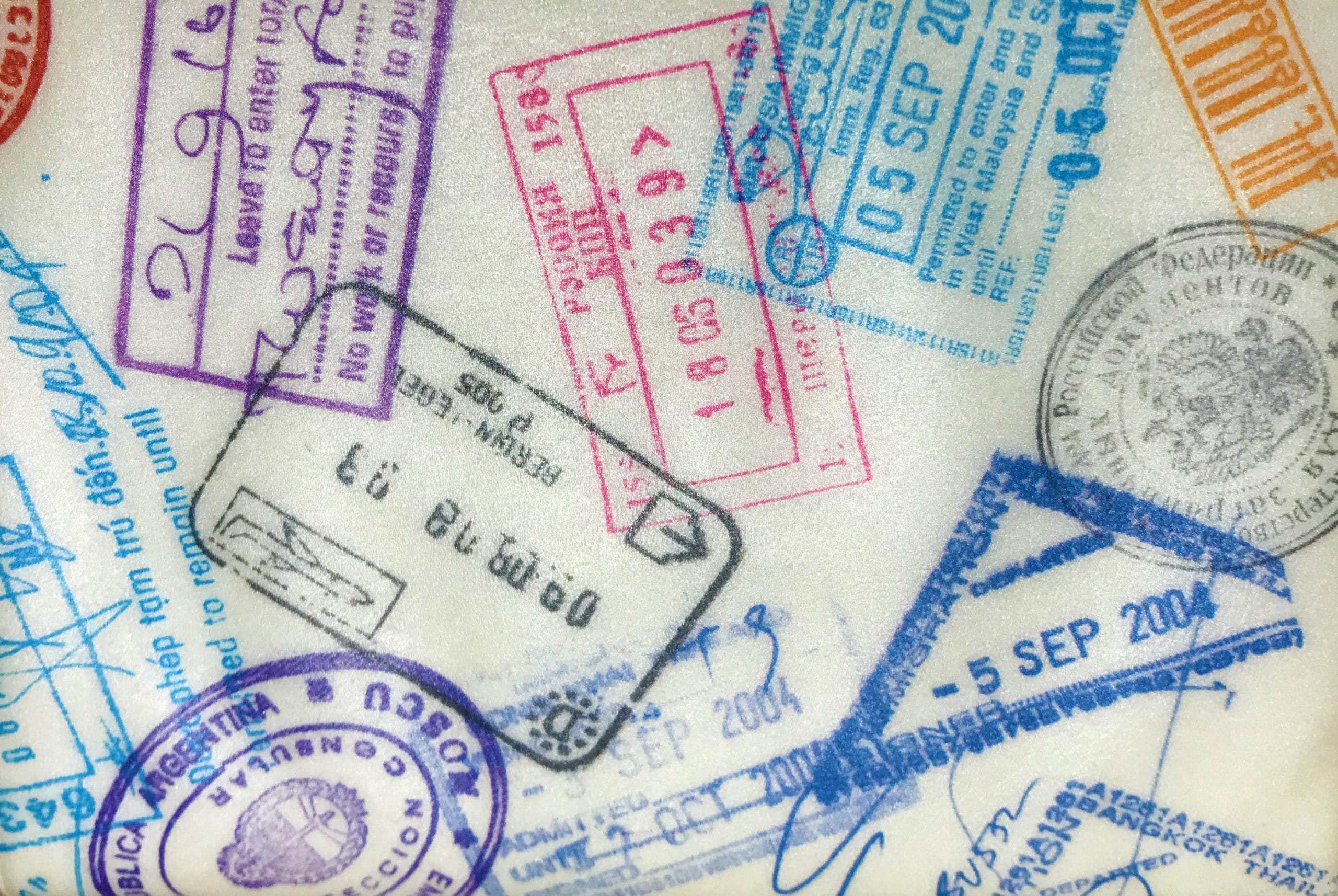