The world is shocked by the unprecedented Russian aggression in Ukraine.  But the sad truth is that it was very much precedented, by Russian aggression in Georgia in 2008.  Much like Ukraine, Georgia began eyeing integration into NATO which led to a deteriorated relationship with Russia and eventually to the Russo-Georgian War which lasted five days and resulted in hundreds of casualties.

By the time we visited Georgia in 2015, this short war was a thing of a distant past.  Or so I thought.  Georgians, possibly the most hospitable people in the entire world, welcomed Julia and me and my Russian-speaking parents with open arms.  We ate delicious food and drank sweet red wine, fell in love with street dogs, swam in natural pools of mineral water, and saw vast landscapes of imposing mountains and rolling green valleys, wild rivers, and gorgeous hilltop monasteries.  We hired Levon, our very first Airbnb host in Tbilisi to drive us through the Georgian countryside and act as our driver and guide.  We didn’t hire him to be our friend, that came as a free bonus.

On day three of our road trip through central Georgia, we came across a stark reminder not only of recent Russian aggression but of violence and hostility interwoven throughout Russian history.

“I want to visit Joseph Stalin’s Museum,” I said.

Levon wrinkled his nose, “What for?  What’s there to see?  Soviet propaganda posters and a collection of his smoking pipes?”

But I was adamant.  Joseph Stalin, the most brutal dictator in Russian recent history, whose regime killed anywhere from 10 to 20 million of his own citizens, including forced starvation of around 7 million Ukrainians, was born in Gori, Georgia.  The museum, which included his relocated childhood house and private train carriage, was just a short drive from Uplistsikhe Cave Town where we spent our morning climbing through the abandoned rock-hewn town’s many caves and hollows.

And so we went.  Levon, to emphasize his opposition to this entire endeavor, remained by the car, smoking a cigarette.  My parents wandered off to the museum café and bought themselves ice cream.

Julia and I headed towards the museum's main entrance to be greeted with the following banner:

"This museum is a falsification of history. It is a typical example of Soviet propaganda and it attempts to legitimize the bloodiest regime in history."

It was a lot to take in.  A museum that freely discredits its exhibits and condemns its own existence was a surreal sight. We later learned that the pro-Western government of Mikheil Saakashvili wanted to change this museum into the “Museum of Russian Aggression” and this shiny sign was the first and only step taken so far.  Inside the museum was a standard shrine to a popular personality with a vast multitude of photographs, paintings, posters, newspaper clippings, and no reference to millions murdered or crimes committed.

Outside, we walked around a small cute wooden cottage, labeled as Joseph Stalin’s childhood home. Levon strolled up and told us that the popular rumor around these parts was that this was not Stalin’s childhood home, but a nicer-looking house from a nearby village.  Apparently, his real home looked far too impoverished to be associated with such a prominent man. Another rumor was that Putin was infuriated at the idea of the “Museum of Russian Aggression” in Georgia and pointed out that a lot of ethnic Georgians were highly ranked members of the Communist regime in Russia.  Mikheil Saakashvili replied that in that case, Russians could open a “Museum of Georgian Occupation” in Moscow.  Putin was not amused.

At the time, I thought to myself that I would very much enjoy visiting both of these hypothetical museums.  Alas, neither was to be.  At the time of writing this post, I checked Wikipedia to find out that the sign was removed in 2017 and the museum still remains a shrine to one of the most ruthless dictators of the 20th century.

Back in the car, Levon was unusually silent as he drove us back to Tbilisi.  Just a few kilometers down the road, he slowed down the car and pointed to the vast field.

“This used to be Georgia.  This is now the Russian-backed separatist region “South Ossetia”.  We woke up one day and there were military planes and tanks.  Families were split apart and can never visit each other.  Land was taken away from farmers.  It’s not enough what they stole in 2008, Russian soldiers keep moving the fence deeper and deeper into Georgia at night.”

“And they are doing this to Ukraine now.” I thought.  Just a year and a half before, a wave of demonstrations and civil unrest in Ukraine forced the resignation of pro-Russian President Viktor Yanukovych, a move that angered Moscow.  Ukrainians, much like Georgians, wanted to be members of the EU and eventually NATO, which Russia viewed as an existential threat.  Russia invaded, annexed the Crimean Peninsula from Ukraine, and launched a political and military campaign to assist pro-Russian separatists in the Donbass region.

At the time, sitting in a slowly rolling car, watching the green fields of what is now South Ossetia, listening to Levon’s raspy voice recounting the horrors of the Russo-Georgian war, I could not possibly imagine all the future horrors of Russian aggression in 2022.  That small museum in Gori could not possibly encompass them all.

We called Levon a few days ago.  His raspy voice and quick wit were instantly recognizable over the crackle and humming of a bad phone connection.  He has been taking in Ukrainian refugees, he is upset at his government for not doing enough, he is enraged with the Russian government.

“They think they are going home in a week,” he said, referring to the latest Ukrainian family he took in, “They don’t understand.  I have been a refugee from Russian aggression for 30 years now.”

He was a young man when his family escaped from Sukhumi, Abkhazia in 1992 during the War in Abkhazia, fought between Georgian government forces, Abkhaz separatists, and the Russian army.  Just a year later, separatist forces, supported by Russia, stormed Sukhumi and perpetrated violent ethnic cleansing against Georgians in what became known as the Sukhumi massacre.  Levon and his family were never able to return home.  His sons grew up in “foreign lands” as he called it.

“I still hold out hope for a better tomorrow for Ukraine,” Julia told him, barely hiding the sadness in her voice.

“You will never see a better tomorrow!” Levon chuckled.  “Do you know why?  Because when it arrives, it stops being tomorrow and becomes today!”

“Well then,” Julia told me after hanging up, “I hope for a better today.” If you are able, please pick a charity involved in humanitarian relief, recovery, and peace-building efforts in Ukraine and donate for a better today. 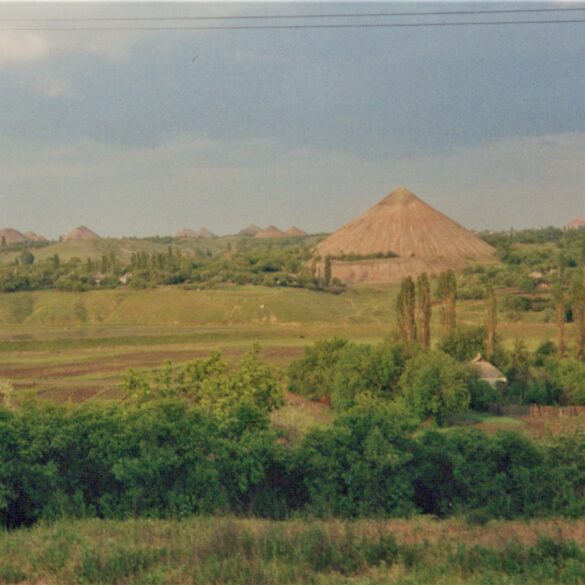 Donbas of My Youth