We arrived in Barcelona early in the morning after a hellish overnight train ride that we still remember more than 10 years later.  Bleary-eyed and groggy, our zombie-like entrance into the city was less than glorious.  But that did not matter after all.  We were in Barcelona.  The city of Leo Messi and FC Barcelona.  The Catalan capital.  The independent, resilient, and proud.  The place where the word “cheese” was no longer “queso” but “formatge” and where the passersby spoke not Spanish but Catalan.  The unofficial flags of Catalonia, Estelada, looking awfully like the flags of Puerto Rico, albeit with white stripes colored in yellow, were ubiquitously swinging from nearly every balcony.  Like an off-tune, counterfeit version of Freddie Mercury and Monserrat Caballe, we entered the city’s Gothic Quarter excitedly humming:

It was the first time that we met

How can I forget

The strangest thing is that although I was excited to be here, as we walked the narrow streets of the oldest part of Barcelona, they somehow felt unauthentic to me.  They did not feel like Barcelona I created in my imagination years ago.  At the age of 15, in art history class, I saw the images of La Sagrada Familia in a textbook for the first time.  Barcelona’s landmark cathedral looked unfinished yet so bizarrely beautiful and whimsical with its Neogothic skeletal exterior.  In class, we were told about Antoni Gaudi, a Catalan architect behind the cathedral and other unique buildings in the city.  For many years, I had associated Barcelona solely with Gaudi and his quirky architecture.  I imagined that the city was filled with nothing but Gaudi’s buildings. 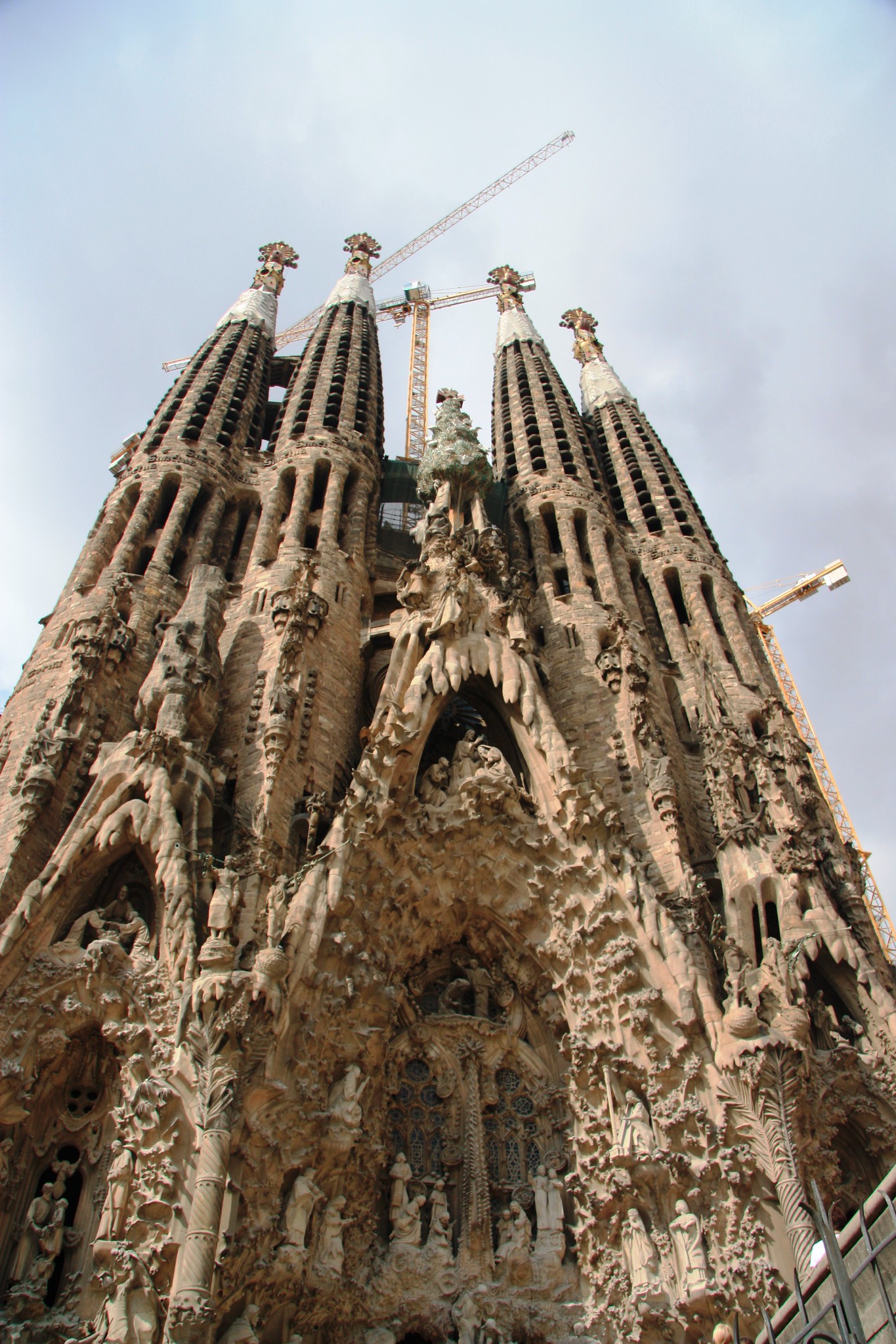 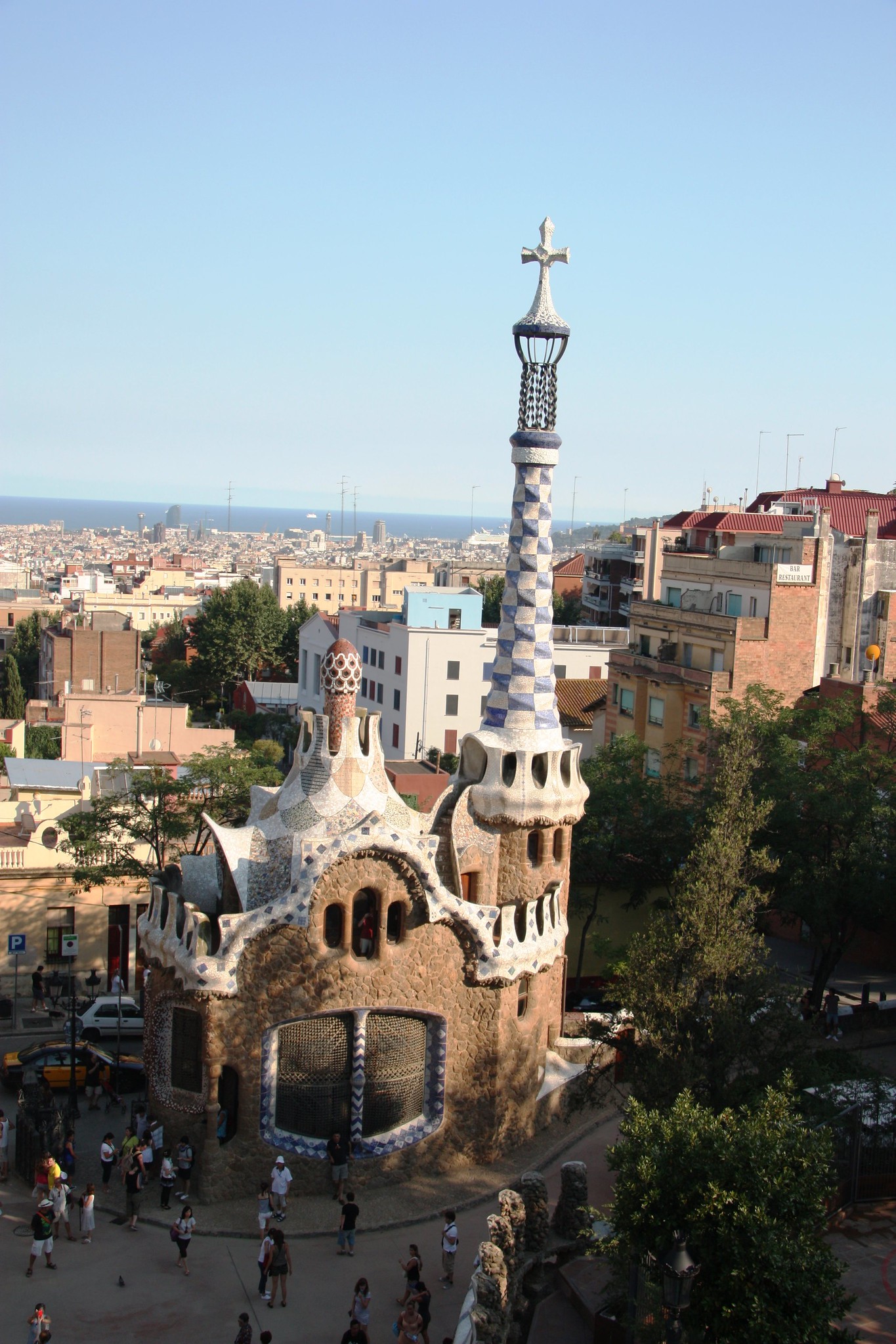 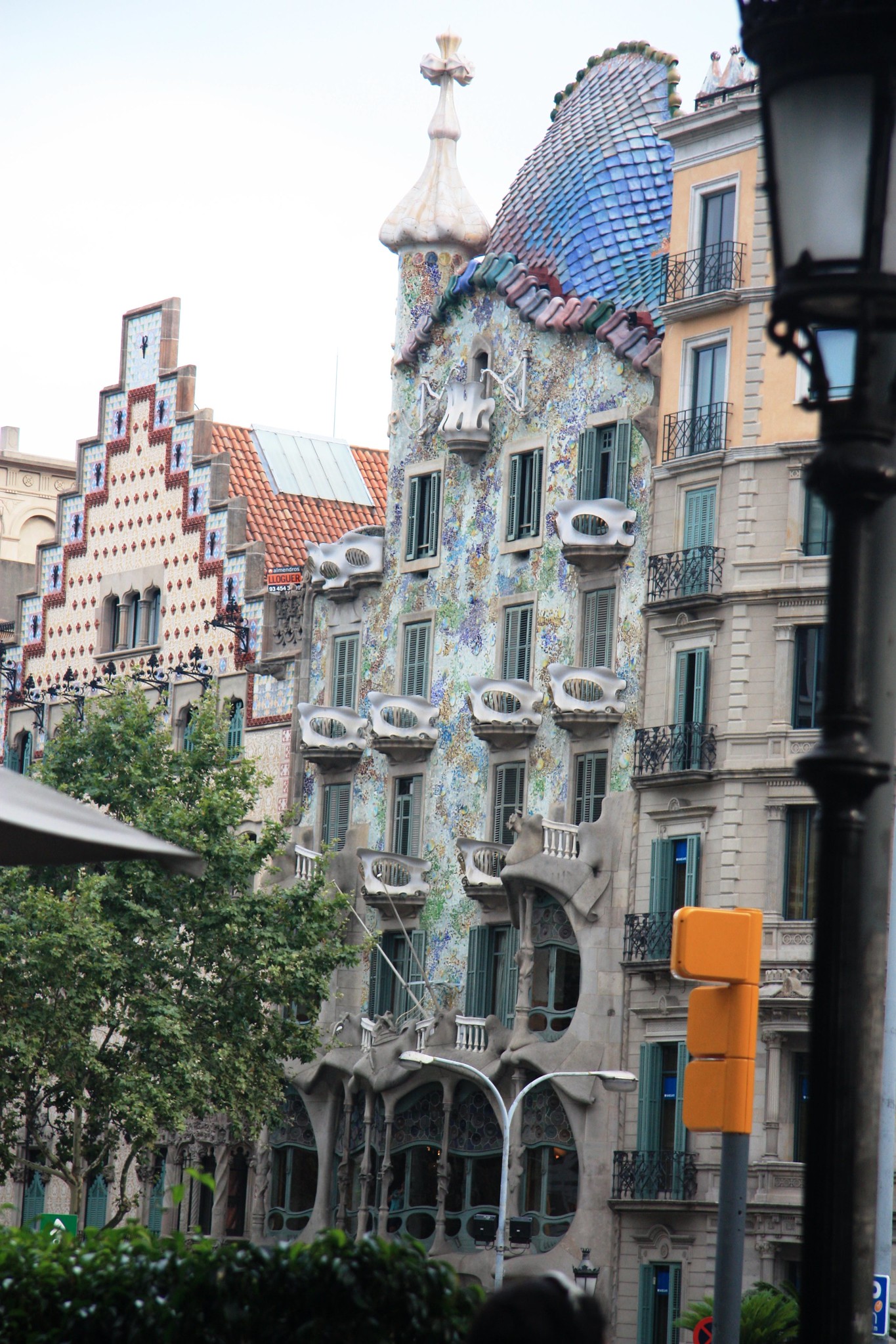 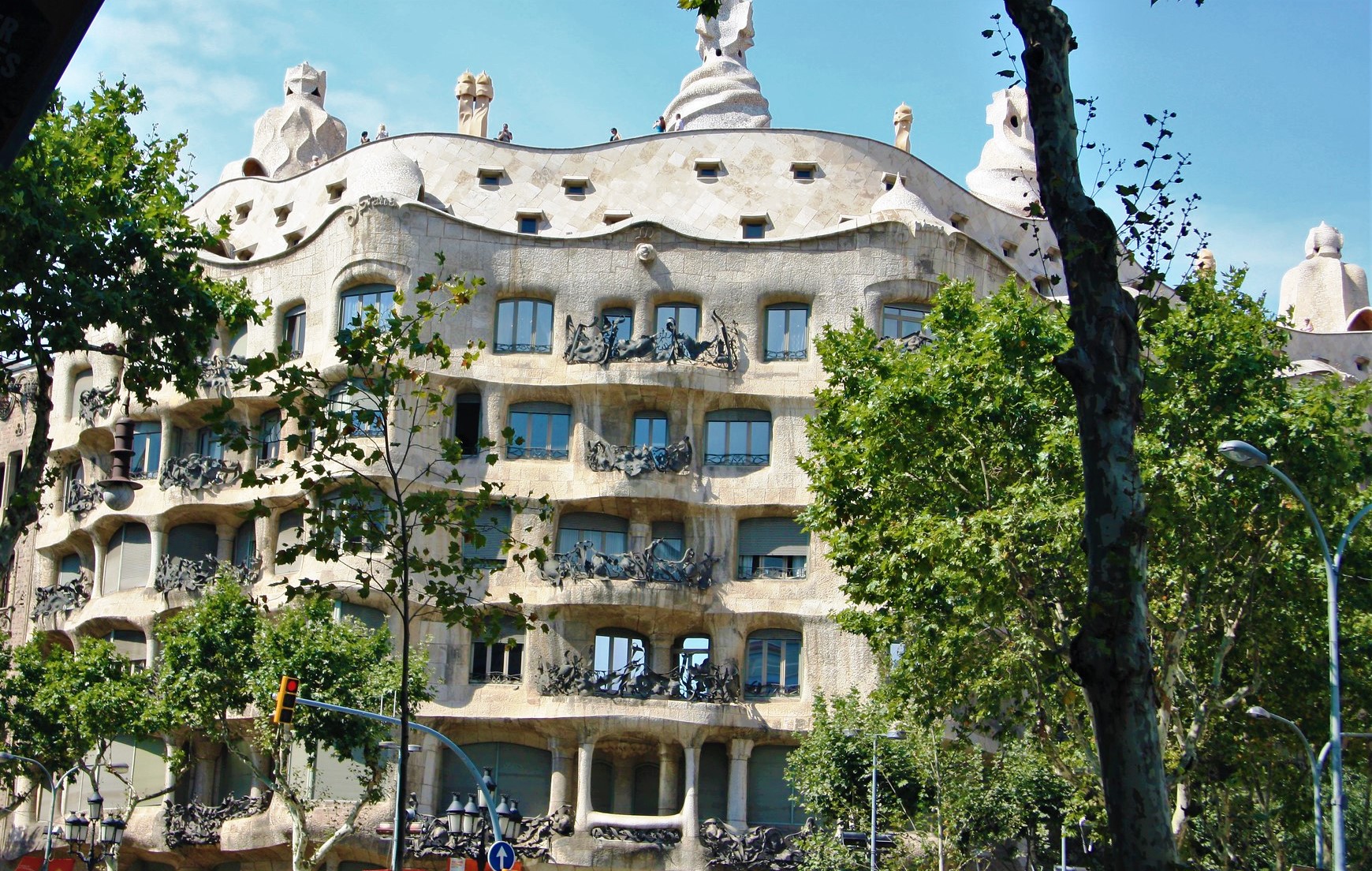 We were visiting Barcelona in August of 2010. Those were still lean years. I had just graduated from law school, and our travel was on a shoestring. On our second day in the city, we went to see the cathedral. Trying to save money, we decided to buy one ticket and then take turns seeing it. I left Julia on the sidewalk near the cathedral and went in, promising to return twenty minutes later to switch places. I somewhat naively believed that the best feature of Sagrada Familia was the unfinished exterior and that the interior of the cathedral would not take much time to see. Forty minutes later, I returned completely flustered admitting that I would need at least two hours to see the cathedral properly. The interior of the cathedral was as spectacular as the exterior. We took turns and spent nearly half a day there.

The cathedral is famous for its snail pace of construction. When Gaudi died in 1926, the construction was underway, and today, nearly 100 years later, the cathedral is still unfinished and not projected to be completed for at least another decade. When I entered the church, the work was actively in progress. The construction workers, up below the ceiling on ladders and scaffolding were cutting and hammering away, the noise of chainsaws and hammers echoing through the building. One portion of the cathedral was cordoned off and off-limits with the construction dust floating in the air. In other circumstances, I would be annoyed; but here I was witnessing living history. Can you imagine being there when the Taj Mahal was constructed? Or the Great Wall of China? I watched the construction workers with silent admiration and appreciation.

Gaudi was known for his desire to emulate natural shapes. The most striking feature of the interior of Sagrada Familia is a group of supporting columns in the nave resembling a forest with branches. The main purpose of the columns to provide support for the roof is not even immediately obvious because it feels as if a forest was planted inside the cathedral. We visited on a sunny summer day and the sunlight seeped and reflected through the stained-glass windows creating an enchanting image of a colorful stone forest.

Outside, the most spectacular feature of the cathedral was the nativity facade, dedicated to the birth of Jesus. One of my personal favorite things at Sagrada Familia was taking an elevator and then climbing the stairs to get to one of the steeples to enjoy the views of the spires of the cathedral and the unparallel views of Barcelona. The next day we had another frugal dilemma. We needed to decide which out of two iconic UNESCO Heritage Gaudi houses to visit: Casa Batlló or Casa Mila. We did not feel justified indulging ourselves in visiting both. Today, we would certainly buy admission to both buildings and more, but in 2010 we were counting pennies and making hard choices. We agreed to buy tickets to Casa Mila and then admire Casa Batlló from the street for free. Both houses are unquestionably Gaudi's masterpieces and his genius is on full display in these buildings. Avoiding straight lines and hyperbolizing the Art Noveau style, Gaudi took modernist architecture to new heights. The curving and protruding balconies with exquisite ironwork, melting-looking windows, a colorful mosaic made of broken ceramic tiles, and whimsical ventilation towers evoking either the images of medieval fortresses or the mountains of Cappadocia, Casa Milla and Casa Batlló are like nothing else.

To cap our Gaudi-mania, we took a cab to Parc Güell designed by Gaudi, another UNESCO Heritage site. The park is located on a hilltop and was once conceived as a housing development that never materialized. Throughout the park, whether in a multicolored mosaic salamander sculpture or a colorful serpent-shaped bench, Gaudi’s genius touch is everywhere. You do not need to be a Gaudi expert to easily spot some of the signature features of his works. For example, the stony roadway in the park resembles an alley of overarching trees, immediately invoking an image of the stone columns of Sagrada Familia. We visited Parc Güell on a beautiful August afternoon. The gorgeous views of Barcelona, the Mediterranean Sea, and Sagrada Familia were right in front of us. The viewing platform was located by the pretty gingerbread houses that looked like something out of a fairytale. There were not a lot of people in the park, and the atmosphere was tranquil and serene. In the following years, that would change. Barcelona, and Parc Güell specifically, would go to become a huge hit with tourists, bringing hordes of visitors chasing Instagram-worthy pictures. The over-tourism would cause the city to do the unthinkable … charge 10€ to get in the park. The locals are still allowed to visit for free during certain hours. We are just happy that we avoided the madness and visited Parc Güell when it was still free of charge and tourists. Back in 2010, when lunch was sharing one crepe from a street-food stall, 20€ to get into the park very well might have broken our budget.

I often wonder if it’s time to revisit Barcelona. With better travel skills and fatter wallets, it could easily be a completely different experience. I imagine standing inside Sagrada Familia and spotting every way it changed in the last ten years or seeing it fully finished after the 100th anniversary of Gaudi’s death, in 2026. I would even buy my own crepe at a sit-down restaurant and raise a glass of Penedès to Catalonia and to all my future travels. 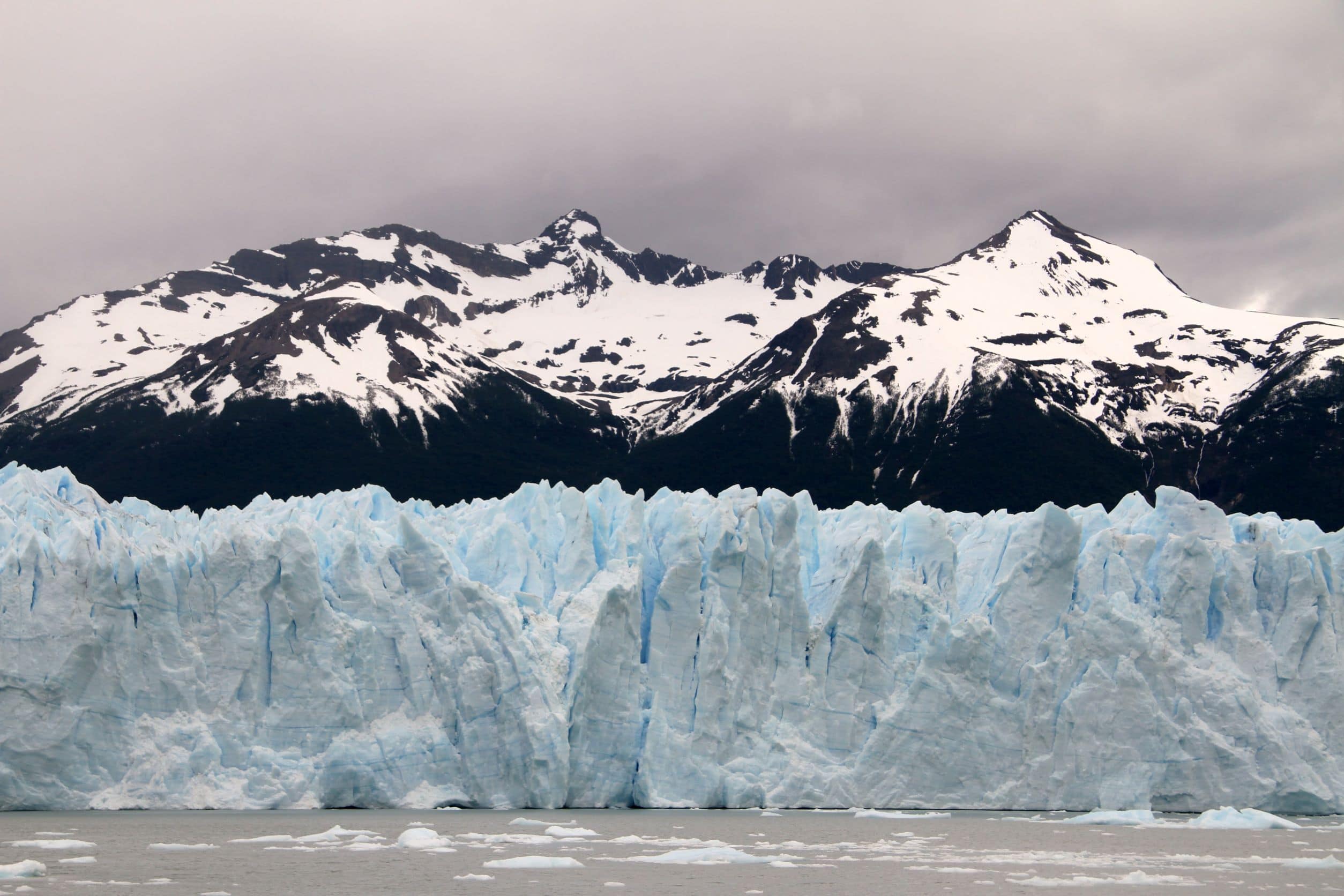 Walking on Not-Very-Thin Ice in Argentina