When I met Victor in 2003, I proudly told him I was an experienced international traveler.  After all, I’ve been on four trips out of the country!  Victor, who at that point had only been on the plane once, from Belarus to the USA, was properly impressed.  Straight out of college, I went on a trip to Europe with my girlfriends, a preplanned tour with a travel operator where we were driven around 9 countries in as many days, at a dizzying pace.  I went to Russia for two weeks to visit old friends.  I went on a Birthright tour of Israel, a free week-long tour for any Jewish person under 26 years of age, where multiple rabbis tried to convince us that it’s our duty and fate to eventually immigrate “back to Israel”.  And finally, the crowning jewel of my international traveling achievements, a two-week self-planned trip around Europe in 2002 with my seventeen-year-old sister and three male friends.  And that's the trip I am going to be writing about in the next few posts.

The initial plan was to take my sister to visit our maternal aunt in Germany but seeing as how I had two entire weeks at my disposal, I decided to make the best of it.  Nowadays, I would have spent the entire two weeks carefully combing through Germany and still find myself short on time.  Back then, two weeks seemed like an eternity, and I managed to fit in Hungry, Czech Republic, Austria, not to mention a day-long stopover in London.  I also threw out a call to my sizeable friend group to see if anyone wanted to join.  It was less about finding travel partners and more about boasting about the upcoming trip, but somehow three more people jumped on board.

A little side note about my friends.  Andrei had a job that required frequent trips to Europe, so he was very much looking forward to leisure strolls down the familiar streets and long sits at pubs.

“I’ve seen all the big sights already,” he told me confidently, “I am done running around tourist sights.  This time, I will take it easy.”

Max has never been to Europe before and, of course, wanted to see all the major tourist sights.  But most of all, he wanted to see a girl who lived in Germany and whom he briefly had met in Chicago.  She was going to be joining us halfway through our trip.

George was a mystery.  Mostly because I never met him before.  He was Andrei’s good friend and lived in New York.  He remained a mystery throughout the trip, as he rarely spoke and preferred to let Andrei do all the talking for both.  They were going to be arriving a few days late and joining us in Germany.

Our adventures started immediately upon landing in London.  Jet-lagged and confused, we misinterpreted the exchange rate of pounds to dollars and were pleasantly surprised at how “cheap” everything was.  We then proceeded to buy £25 tickets to a hop-on-hop-off tourist bus, figuring it was only $17 per person, rather than the pocket-busting $32.  My sister then proceeded to fall asleep on this bus, while Max and I kept dozing off and on throughout the hour-long drive around London, rather than hopping off and on.  We ate a hearty lunch and I even spent £15 on a small sporty bag I didn’t really need, but hey, it was so cheap!  We felt pretty good about our day in London, and it wasn’t until our stopover on the way back that Max suddenly realized that we miscalculated the exchange rate and the staggering amount of money we spent in 10 hours.  Sidenote: I have been using the London bag for almost 20 years now.  It’s in a terrible state now, but I will be damned if I ever throw it out, considering how much money I spent on it. But back to the trip.  We arrived in Hamburg, Germany late at night, still tired and jet-lagged from the international flight that morning and the exhausting day in London.  Now again, this was 2002, way before smartphones and Google, GPS maps and translating apps, and everything that makes travel a breeze in 2021.  We spoke no German, and Germany overwhelmingly had no signs in English.  We somehow figured out where the bus station outside the airport terminal was and were trying to buy bus tickets at the automated kiosk.  Everything was in German, and I was blindly pressing buttons, getting more and more frustrated with my complete inability to figure it out.  Max and my sister were helping by occasionally yelling “I think this one!” and pressing a random button.  Suddenly we heard a voice behind us.

“What are you guys trying to do?” someone asked us in Russian.

We turned around to find a young Russian couple observing us quizzically.  We explained that we wanted to buy bus tickets, and they explained that this was a kiosk to pay for parking.  All of us laughed awkwardly.  They were both students at Hamburg University, spoke fluent German, and were also taking the bus to the city center.  They escorted us across the street to the actual bus station, helped us get on the right bus, showed us how to pay for our fare, and told us when to get off at the right station.  We were extremely thankful, and they were exceptionally amused.

“Good luck in Germany!” they called after us, “You will need it!”

Downtown Hamburg was not what I expected.  As a port city, it has long had a seedy reputation, with prostitutes, drunk college students, and homeless people wandering the streets.  We dragged our overpacked suitcases down the sidewalk until we finally located our hostel.  The front door was locked.  We rang the doorbell.  We rang and knocked and rang again.  We stood on the stoop, lost and confused, surrounded by our suitcases.  Suddenly, a drunk man staggered down the sidewalk towards the hostel.  We quickly stepped aside.  He took out a key and with a shaking hand attempted to get it into the keylock.  We tried to talk to him, but he didn’t speak any English or Russian.  Finally, he got the door open and wobbled inside.  I grabbed the door behind him and held it open.  We followed him upstairs, and he disappeared inside one of the rooms.  The lights in the corridor were off and the front desk area was empty.  It was clear that this was not a 24-hour hostel, and we arrived too late to check-in.

We stood in the dark corridor, unsure what to do next.  Outside, I could hear a police siren approaching.

“Wait here,” I told Max and my sister.  I propped the door open and ran outside.  A police car was standing a block away, and I raced towards it.

Luckily enough, one of the policemen spoke English.  I explained our predicament, and he followed me to the hostel.  He took down our information, the name and address of the place, and told us to just find an empty room and sleep there.

“If there is a problem in the morning, tell them to call the police.” He said.

Easier said than done.  It was almost 1 am and I had to creep down a dark corridor, gingerly trying out every closed door to find one that was unlocked, praying that I don’t accidentally stumble into an occupied room.  Finally, we found two empty rooms.  We settled on a bigger one and dragged our luggage in.

The idea of undressing and sleeping in a room without having checked in was unsettling at best.  What if the employees show up early in the morning and open the door with their keys?  What if someone else already checked into this room and was going to show up later at night?  To ease our fears, Max moved a large wardrobe from the wall to in front of the door, completely blocking it.  This way, we could be sure that we had no unexpected guests while we slept.

During the last 24 hours, we tried to sleep in plane seats, bus seats, and now in stolen beds.  Surprisingly enough, I was able to fall asleep almost immediately.  In the morning, we quickly got dressed and repacked our suitcases, just in case the hostel workers would be less than understanding of our unexpected appearance in one of their rooms.  We slid the wardrobe back into its place, opened the door, and carefully peeked out.  Our room was right next to the front desk.  If the young woman currently seated at that desk was surprised at the sound of a heavy wardrobe being dragged across the floor and a door to what was supposed to be an empty room being opened, she didn’t show it.  She cheerfully greeted me in English, took down our information and acted as if our “self-check-in” in the middle of the night was a completely normal thing around here.

And so began our adventures in Germany.  In the following posts, we miss multiple trains, misunderstand most people, misplace our luggage, and almost end up with a misdemeanor, but don’t miss home even once. 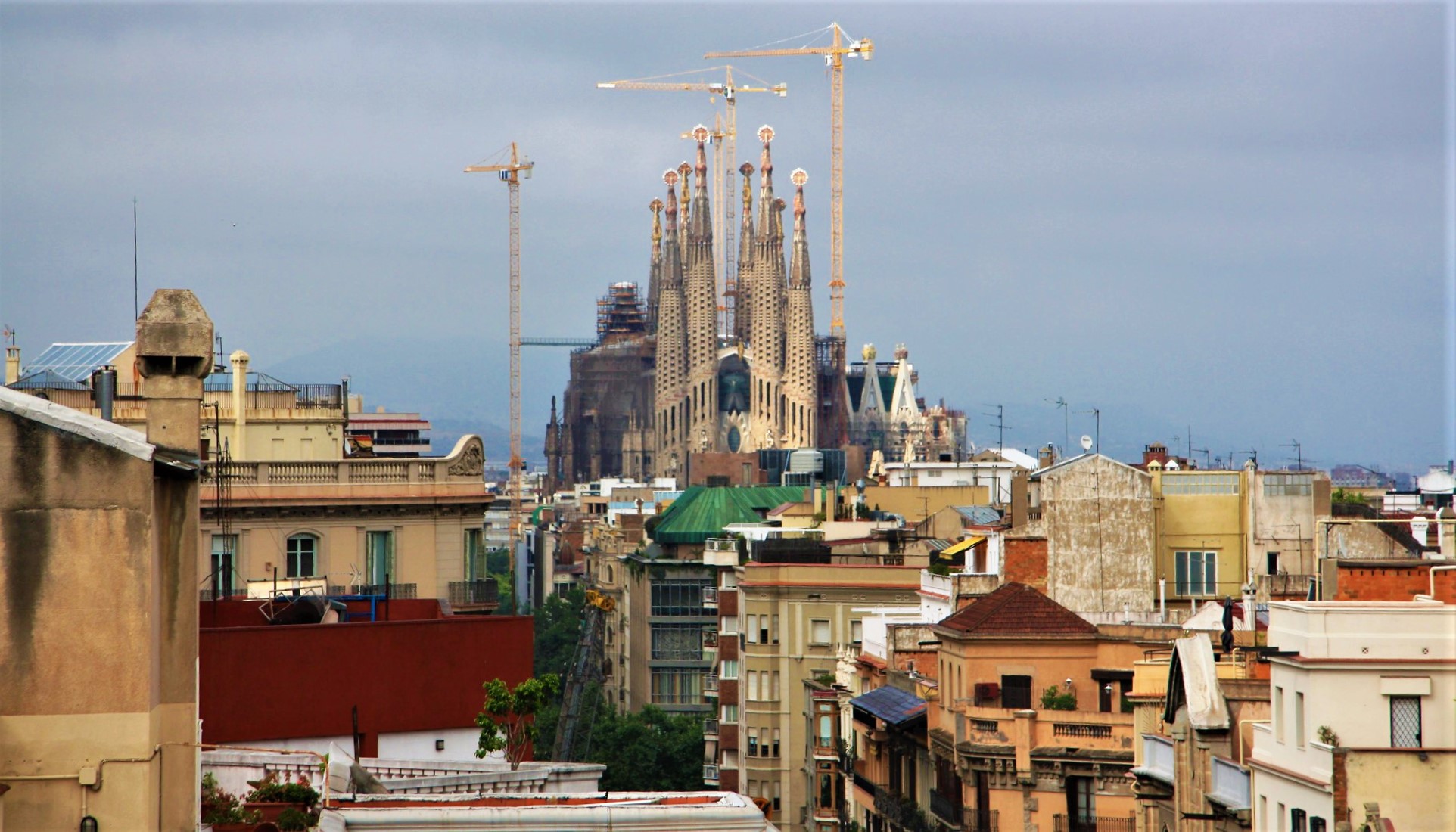