As the sun was setting over the White Desert, our Jeep headed towards the overnight camping spot.  With no large dunes or stones to block our view of sunset or sunrise, our guide and driver found a spot in a large flat valley, white sands stretching towards the horizon.  We were not the only campers there.  Other Jeeps with tourists camped in the same area, scattered about 500 feet apart.  As the sun set and darkness covered the desert, it was easy to think that we were the only living beings for miles around.

While the driver stretched his feet and our guide, Lelik, was entertaining Victor and me with stories about Egypt, Mustafa suddenly sprang into action.  Mustafa was a skinny teenager who, without any explanation, joined our expedition in Bahariya oasis and spent the whole day quietly bouncing around the back seat of the Jeep.  He didn’t seem to speak much English but was always ready with a huge bright smile any time we made eye contact.  Our working theory was that he was a guide-in-training, joining the expedition simply to gain experience.  But now, finally, we could see why Mustafa tagged along.  While we chatted with Lelik and marveled at the sunset, Mustafa unloaded the Jeep, set up a tent, got a fire going, created a separate cozy dining area with rugs and pillows, and was busy preparing dinner.  It seemed like he was able to get all of this done in a matter of minutes.  By the time we made ourselves comfortable on the pillows, he was almost ready to serve the dinner of freshly roasted chicken and potatoes.  As I devoured my food, ravenously gnawing the last bits of meat off the bones, I suddenly saw two shiny predator eyes staring out of the darkness at me.

I froze with the bone in my hand.

“If we are quiet,” Lelik whispered, “It will approach.”

Do we want it to approach? I wondered, as the animal was silently creeping towards us, its eyes glowing in the darkness.  As it tentatively came closer, in the light from our fire I could see that it was only a small big-eared fox, curiously sniffing at our chicken.

I threw my bone toward it, and the fox grabbed it and disappeared back into the darkness, silently. Meanwhile, dinner at other campsites was starting to get rowdy.  We could hear drums beating and loud laughter around the closest campfire.  After a bit of prodding from Lelik, who clearly wanted to go to the other campsite so that he could talk to other guides, we decided to join in the celebrations.

We found all other tour groups already collected at the “party” site - two girls from Singapore, a Chinese couple, and a few German tourists.   Two musically inclined guides were beating their drums, as one of them chanted a song in Arabic, his words carrying far into the empty dark desert.  We introduced ourselves and sat around the fire, awkwardly smiling at strangers.  As soon as the song was over, the guides started encouraging the tourists to sing in their native languages.  Two Singaporean girls feigned shyness at first, but we were soon treated to a melodic song in the Malay language.  The Chinese couple decided that the man would take the center stage with a lyrical rhyme in Mandarin, while his wife clapped along.  The Germans immediately broke into a boisterous chant, accompanied by energetic arm swinging - all they were missing were full beer mugs in their hands.  As I am completely tone-deaf, I left this particular talent show up to Victor.  He sang my favorite Belarusian tune, a heartfelt song about a village boy trying to pick between three girls – a blonde, a brunette, and a redhead.  While there was no “American Idol” type judging in the end, I assured Victor that we definitely placed in the top two.

Heading back to our campsite after an impromptu performance, I couldn’t help but marvel at the night sky around us.  For the first time in my life, the sky was literally around us – it stretched from horizon to horizon, strewn with the brightest stars I’ve ever seen.  It was a strange feeling as if the ground on which we walked was a small patch of land and the giant sky swallowed up everything around us.  I felt as if I was inside an upside-down bowl full of stars, and I was tiny, and the stars were colossal.  The moon was a sliver in the sky and so the path before us remained pitch dark, even with the sky so brightly illuminated.

Back at our campsite, Mustafa had already washed the dishes and prepared Lipton tea Egyptian style – hot, over-steeped, and incredibly sweet in tiny cups.  As we sipped our tea, in broken English and hand gestures, Mustafa explained that if either of us needed to go to the bathroom at night, we must wake him up and that he would accompany us to make sure we don’t get lost.  I was confused at this concept but nodded along anyway.  As we climbed into our tent, I noticed that our sleeping bags were carefully laid out, with one edge neatly folded over for easy access, and a bottle of water by each pillow.

“I think this is what glamping is,” I told Victor as we climbed inside our sleeping bags. “How fancy is this?” I woke up in the middle of the night, regretting having drunk the tea and the bottled water before bed.  As I climbed out of the tent, I didn’t even briefly consider waking up Mustafa.  I am a grown woman and I’ve camped many times before and I don’t need a teenager listening to me pee.  Shivering in the night cold, I briskly marched into the darkness.  A dozen or so steps later, I suddenly felt a little dizzy.  I was walking through absolute pitch darkness with the stars overhead seemingly jumping and shimmering in the sky, making me feel as if I was moving faster than I really was and a bit like I was motion sick.  I stopped and looked back.  The tent and the Jeep were gone.  I couldn’t see them behind the veil of darkness, not even faint outlines.  I decided that I had gone far enough, dug a small hole with my shoe in the cold sand, and squatted.  Walking back, I had to look down at my feet to keep myself from feeling dizzy and lost.  I had no idea if I was walking directly back to the tent or if I made a slight miscalculation and was going to pass our tent in the darkness.  The last thing I wanted to do was stand in the middle of the desert, shivering, and screaming “MUSTAFA! I am sorry, I had to pee and didn’t wake you up!” into the night.  Thankfully, I could soon see the Jeep in front of me and was able to crawl into our tent and my warm sleeping bag with no further misadventures.

In the early morning, Mustafa’s head popped into our tent.

We unzipped our sleeping bags and crawled out of the tent, to be greeted by the sun just barely peeking over the horizon, spilling rose-colored light on the desert.  He woke us up at the exact right time, not a minute earlier or later than needed.  Victor and I walked away from the camp, towards the sunrise, as if trying to get closer to the rising sun.  The morning air was chilly and fresh, the desert glowed and glimmered in the first sun rays moving among the dunes.  We watched the sunrise for as long as we could, doing little dances in place to keep warm, but soon the warm breakfast fire behind us and the smell of coffee beckoned us back.  We had a continental breakfast of cheese and pitas, warmed on the fire, bananas, and Nescafe coffee so popular in Egypt.

As we ate, Mustafa was quickly packing up the campsite around us.  I turned to Victor.

“I will never be able to camp without Mustafa again,” I said. “I mean who is supposed to set up the tent and build a fire and cook food and walk me to the bathroom?” With the camping site packed up and breakfast finished, we got into the Jeep and took off to explore the White Desert.  We saw sandstone statues that looked like a chicken hiding by a mushroom, endless dunes, and gorgeous vistas.  After many stops and hundreds of pictures, as we were heading out of the desert, Lelik asked us if we liked our tour.  We enthusiastically nodded and said that we now wish that we had booked a longer tour.

“That’s crazy! I was thinking more of a three-day tour, not three weeks!” I said, but my mind already wondering what it would be like to spend weeks in this beautiful desert.

By the time we got back to Bahariya, I was regretting signing up for such a short White Desert tour.  I was also sure that I had just spoiled all future camping trips for myself – where else would I see such splendor and have Mustafa take care of my every need?

On top of it all, I suddenly realized that we brought enough cash for tips for the driver and guide, but not for Mustafa.  I frantically searched through my wallet and randomly found a 20 Euro note that I brought along to spend during our stop-over in Amsterdam.  I handed the bill to Mustafa, apologizing for not having Egyptian pounds or dollars.  His giant smile quickly put me at ease.  He thanked us over and over while climbing into the back of the Jeep and as the car pulled away, he hung his entire body out of the back window, waving to us until we could no longer see him on the dusty road.  I don’t know where else I can get this much camping pampering for 20 Euros, but I am willing to hear new offers.

We rode back to Cairo, exhausted and already nostalgic for the desert disappearing behind us.  The sun was low on the horizon, its rays illuminating the sands with a golden glow.  I wanted the car to turn around and go back and now, years later, I still get that tickle in the back of my mind – the endless starry sky, surreal white statues, glowing black stones, and rising dunes.    I am even willing to put up my own tent this time. 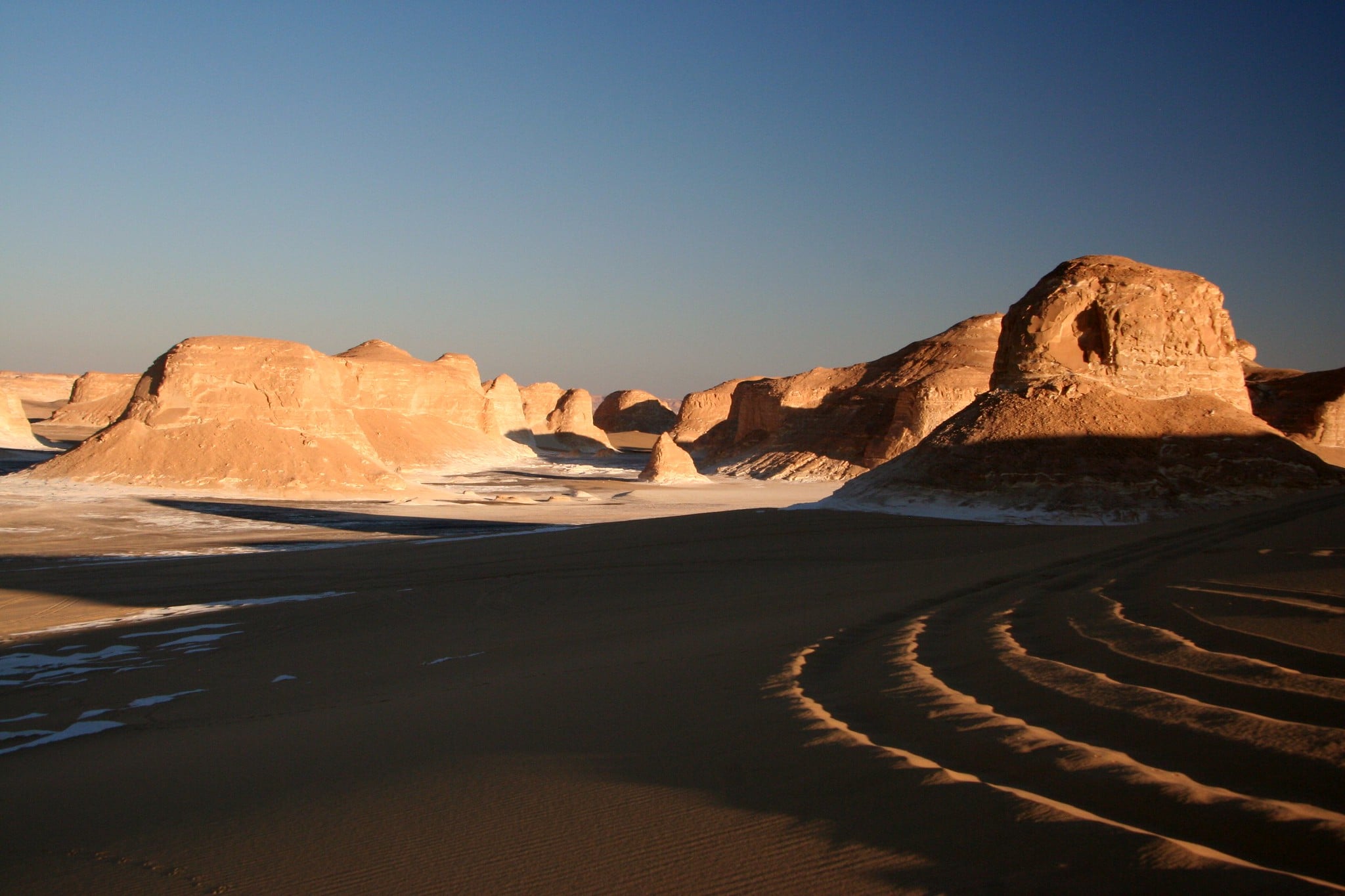 A Traveler's Dilemma: The Human Zoo