We had conversations for years about visiting Mexico on the Day of the Dead (Dia de Los Muertos) but wanted to wait until celebrations fell on the weekend.  Finally, in early 2019, we bought tickets to Morelia and excitedly started planning the trip.  Around Lake Patzcuaro, an hour from Morelia, there are numerous villages with the indigenous population and very authentic Day of the Dead celebrations everywhere, including on a beautifully decorated cemetery on the island of Janitzio.  Four months later, an email from AeroMexico arrived declaring that our flight has been canceled.  Alternative flights offered meant longer traveling time, more time taken off work, and less time spent in Mexico.  Begrudgingly, we canceled our tickets.  It was just a few months from November, and we had no airfare and no idea what to do about it.  After the initial panic subsided, Victor found tickets to Mexico City.

“We’ll celebrate there!” he yelled over the phone, “It’s supposedly more of a commercialized affair in the city, but beggars can’t be choosers!”

Four days in Mexico City didn’t sound too bad at all.  After all, Morelia wasn’t going anywhere and Mexico is one of those rare countries that we go back to time and time again.  Eventually, we’ll make it to Morelia as well, but for now, we’ll just have to shelve that idea.  After a bit of research, we found out that many neighborhoods in Mexico City had their own Day of Dead celebrations and we would have plenty of activities every day. Eleven years ago, when we first decided to visit Mexico City, our families and friends could not understand what we were doing.  Mexico City?  Is it dangerous?  What about drug-related violence?  Won’t you get robbed?  What’s there to see, anyway?  Go to a resort in Cancun!  We were so nervous the first time we visited, we didn’t even go to Plaza Garibaldi at night to see mariachi bands, didn’t see any nightlife for that matter, and carefully pre-planned all our day-time excursions into the city.  Now, a decade later, we came back to spend all night aimlessly wandering around the city and the cemeteries.  Things sure do change in a decade.

But back to Day of the Dead.  A marriage of indigenous Aztec rituals with Catholicism, the resulting Dia de Los Muertos is an unlikely festival of food, parties, costumes, alcohol, and music.   There are actually multiple distinct holidays – The Day of the Innocents or All Saints Day on November 1, dedicated to souls of infants and children, and Day of the Dead on November 2, when the adult spirits awaken and come to celebrate with the living.  There are also celebrations on October 31st, as American Halloween has started to bleed into Mexican culture, with children getting dressed in Halloween costumes and trick-or-treating for candy or money in city squares.  Mexicans view these holidays not as days of sadness but as a time of celebration.  There is nothing spooky or scary about Day of the Dead, it is a period of both reminiscence and merriment, as the spirits of deceased friends and relatives come back from the afterlife to spend time with the living.  But a spirit cannot make it back without a little bit of help and that is what ofrendas are for. 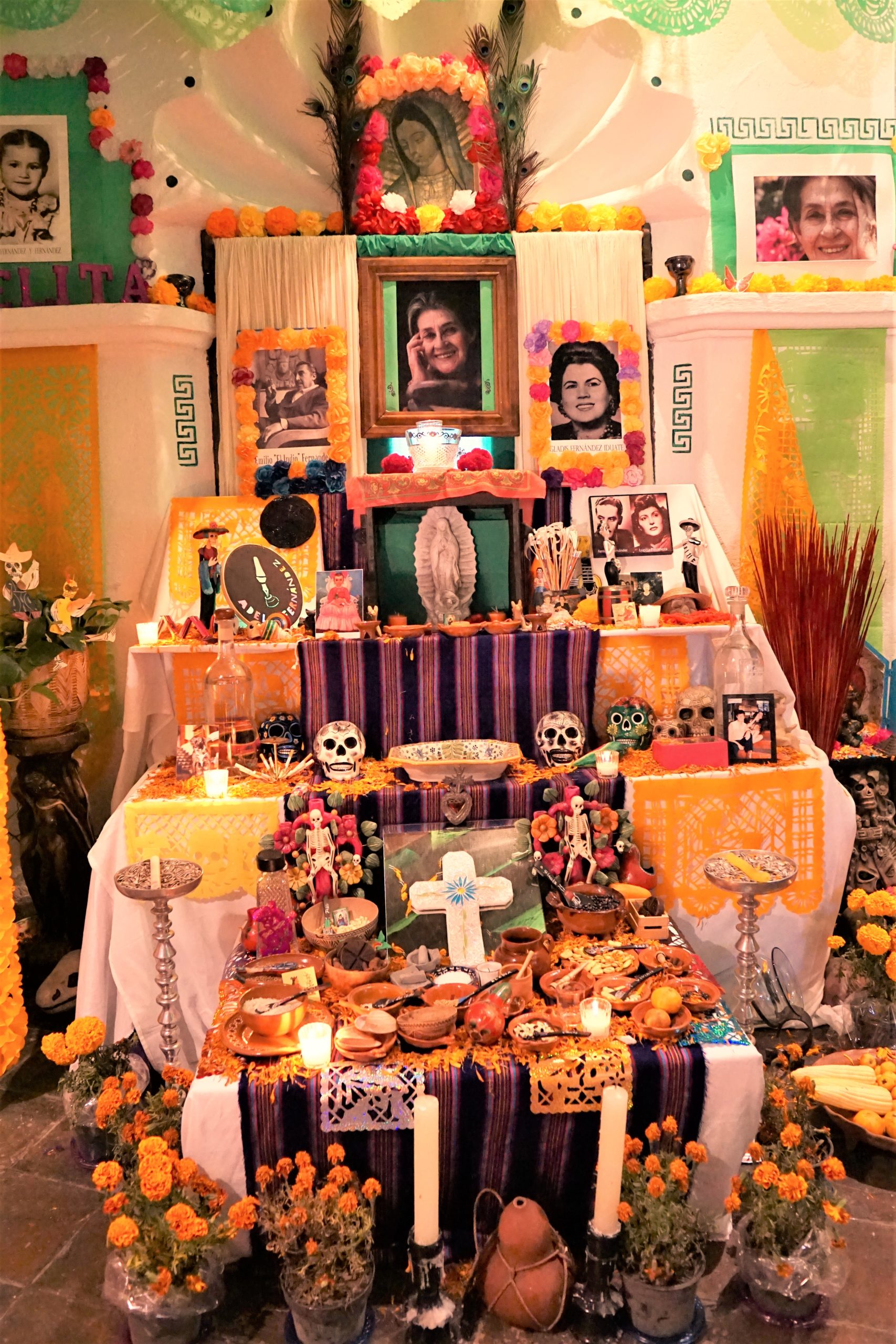 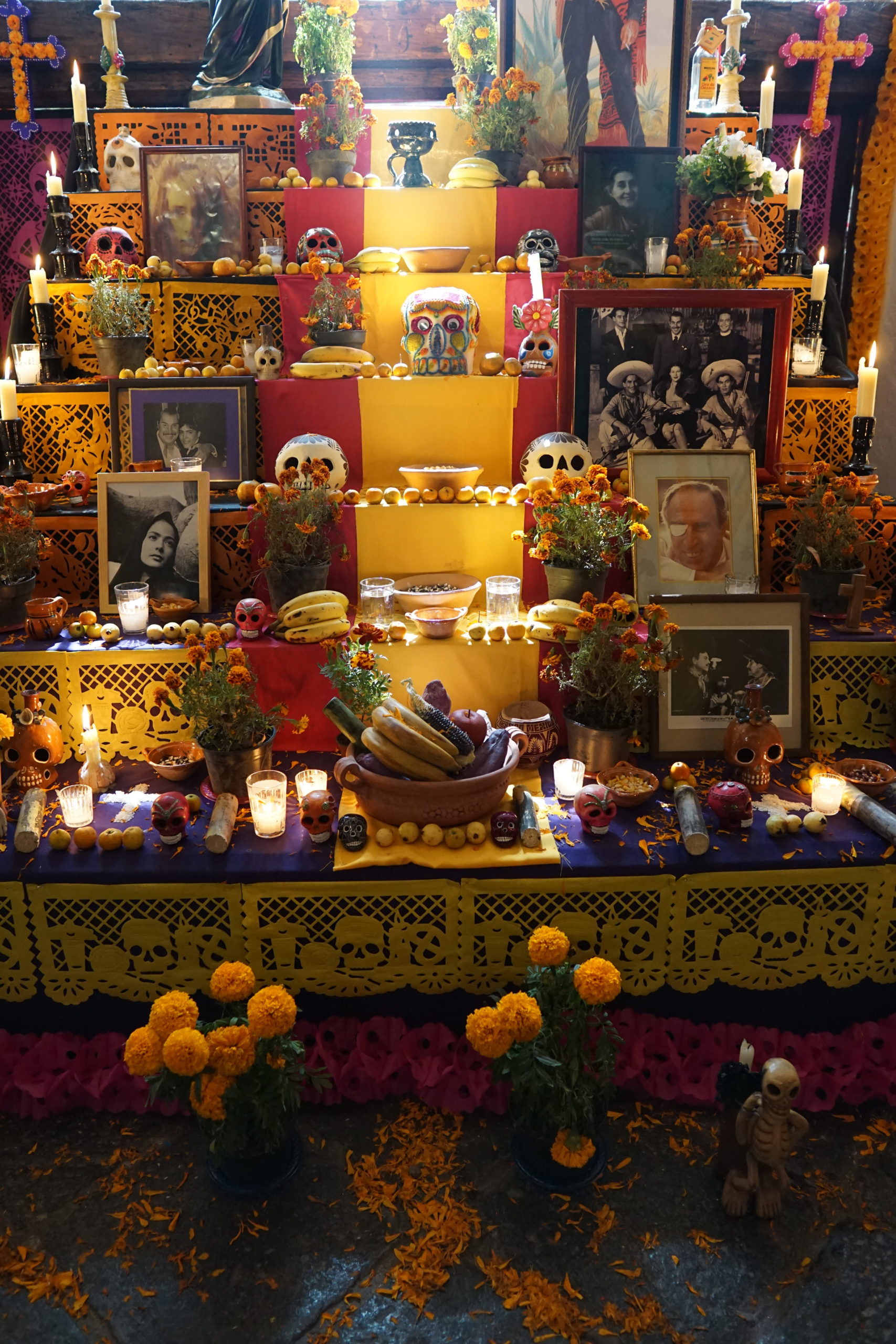 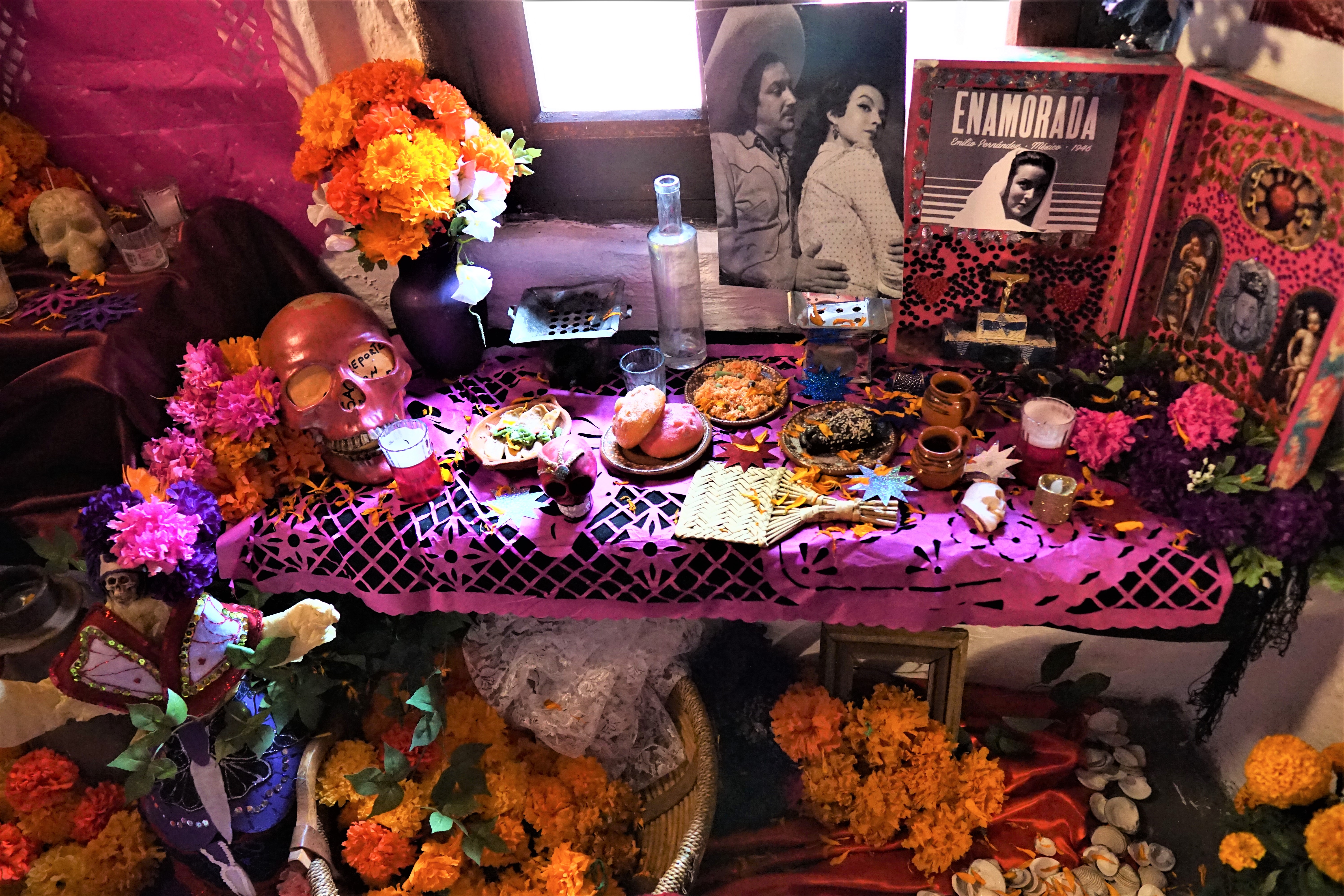 Ofrendas are kind of like altars, but instead of providing offerings to a deity, all the candles, food, and flowers are presented to the spirits of people who have died.  Ofrendas are not a place of worship but a table at which spirit guests are welcomed, where all displayed objects are meant to represent and honor the memory of those who passed away.  Besides personal objects of each deceased, such as a musical instrument for a musician or a toy for a child, each ofrenda must have candles to guide the spirits to the ofrenda, water and food to welcome the spirits from their long journey, incense to purify and carry prayers to God, flowers such as marigolds to symbolize the transience of life, and most importantly, a picture of the deceased on the very top to identify a spirit invited to this ofrenda.  We saw ofrendas in museums, inside homes, in businesses, in parks, and in city squares.  By Santo Domingo church in the Centro Historico, there were no less than two dozen creative ofrendas to Emiliano Zapata, a leading figure in the Mexican Revolution, created by college and high school students for an ofrenda competition.

The most common food item on the ofrendas and everywhere was the ever-present Pan de Muerto - a soft, fluffy, sugar-coated bun with characteristic “crossbones” decorations on top and often filled with delicious airy cream.  No matter how much we tried to watch the calories, Pan de Muerto beckoned to us from street vendor carts and display windows in bakeries.  We saw it eaten in parks, on the streets, in the cemeteries, and during the Day of the Dead parade in Mexico City.  More specifically, we were the ones snacking on this delicious bread for more than 3 hours of the parade. The parade itself is a fairly recent addition to the celebrations in Mexico City, the idea of which was sparked by a James Bond movie where a fictitious spy is running through a fictitious Mexico City Day of the Dead parade, dodging bullets and sugar skulls.  Mexicans took notice and a few years ago Mexico City had its first real Dia de Los Muertos parade, with no less action and intrigue than an average James Bond film.  This year, the parade was colorful and lively despite rainy weather and grey overcast skies.  There were floats, puppets, intricate Catrinas, giant sugar skulls, Aztec warriors, and incense-burning cleansing rituals performed by men and women in traditional dress.  It was the first year the LGBTQ group was allowed to participate in the parade and they proudly walked under a slightly obscure banner “Catrinas Exoticas” while waving rainbow flags. 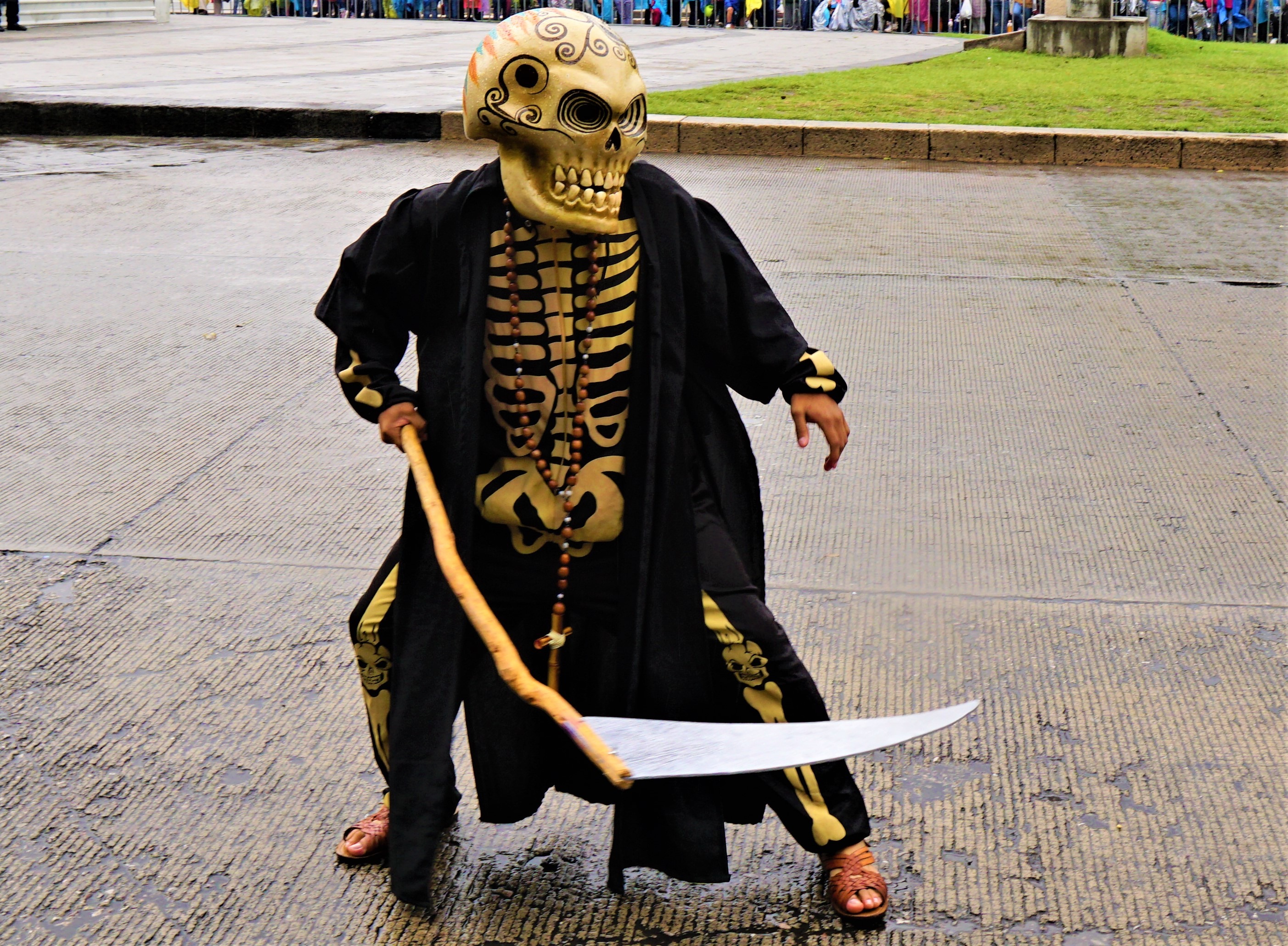 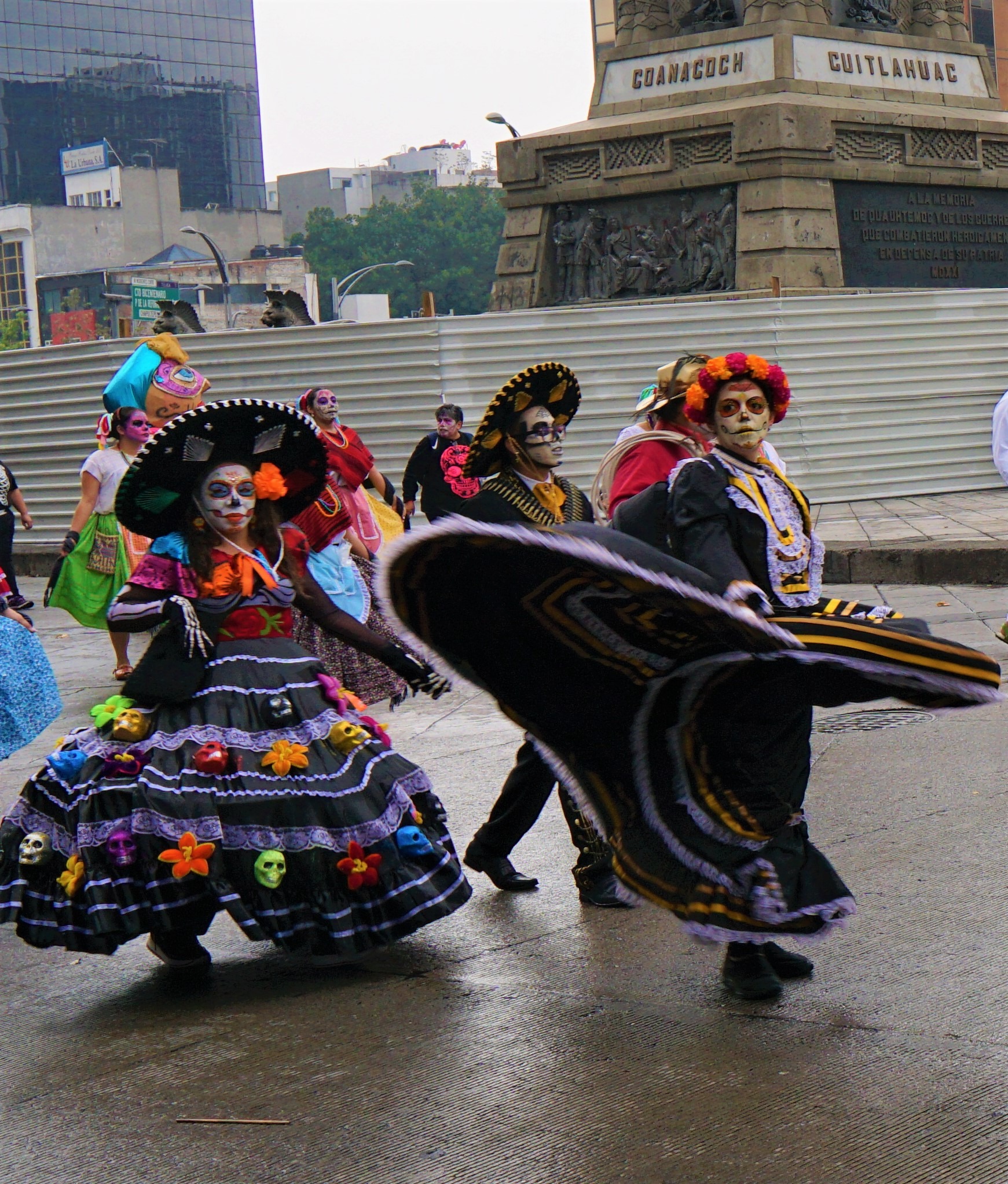 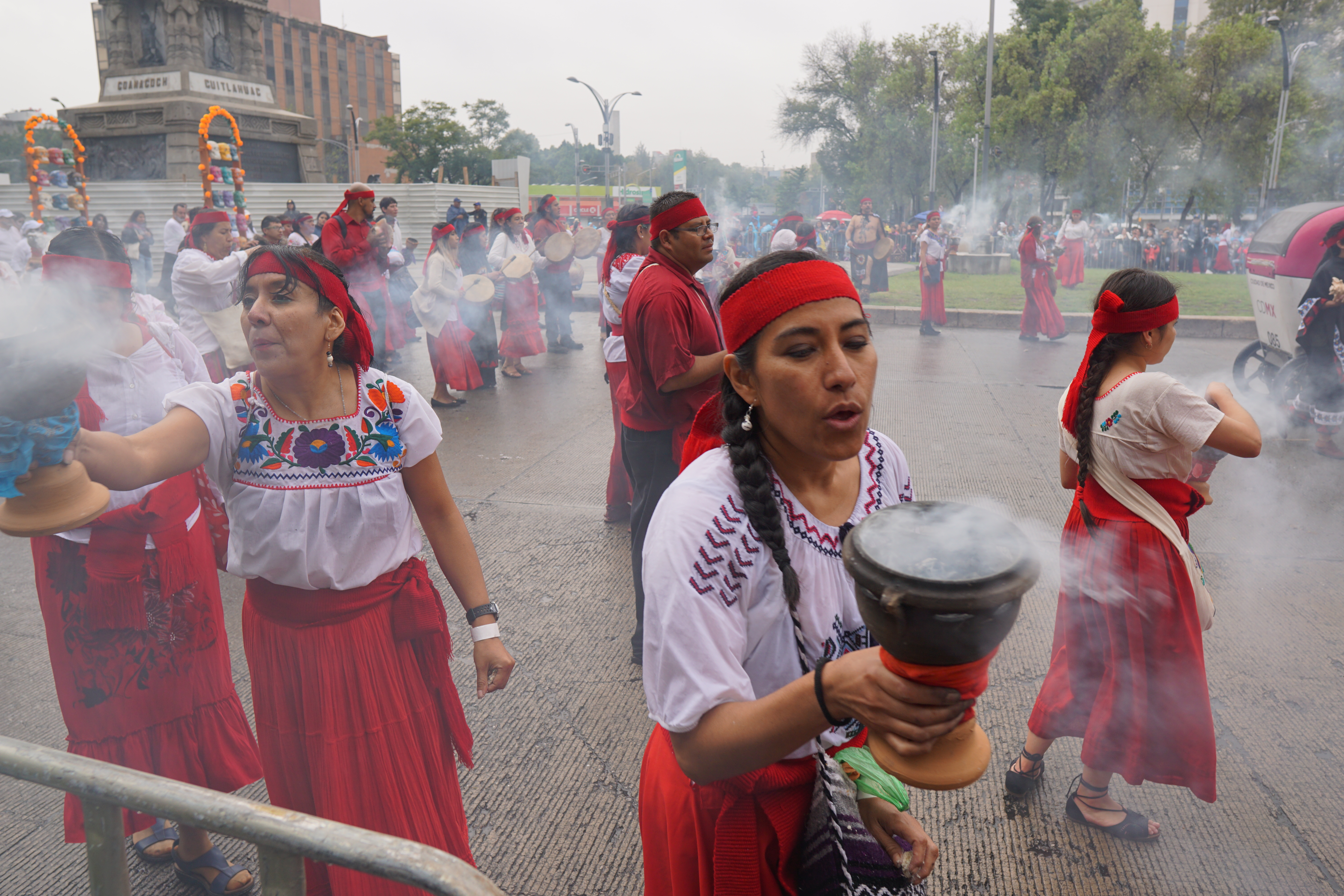 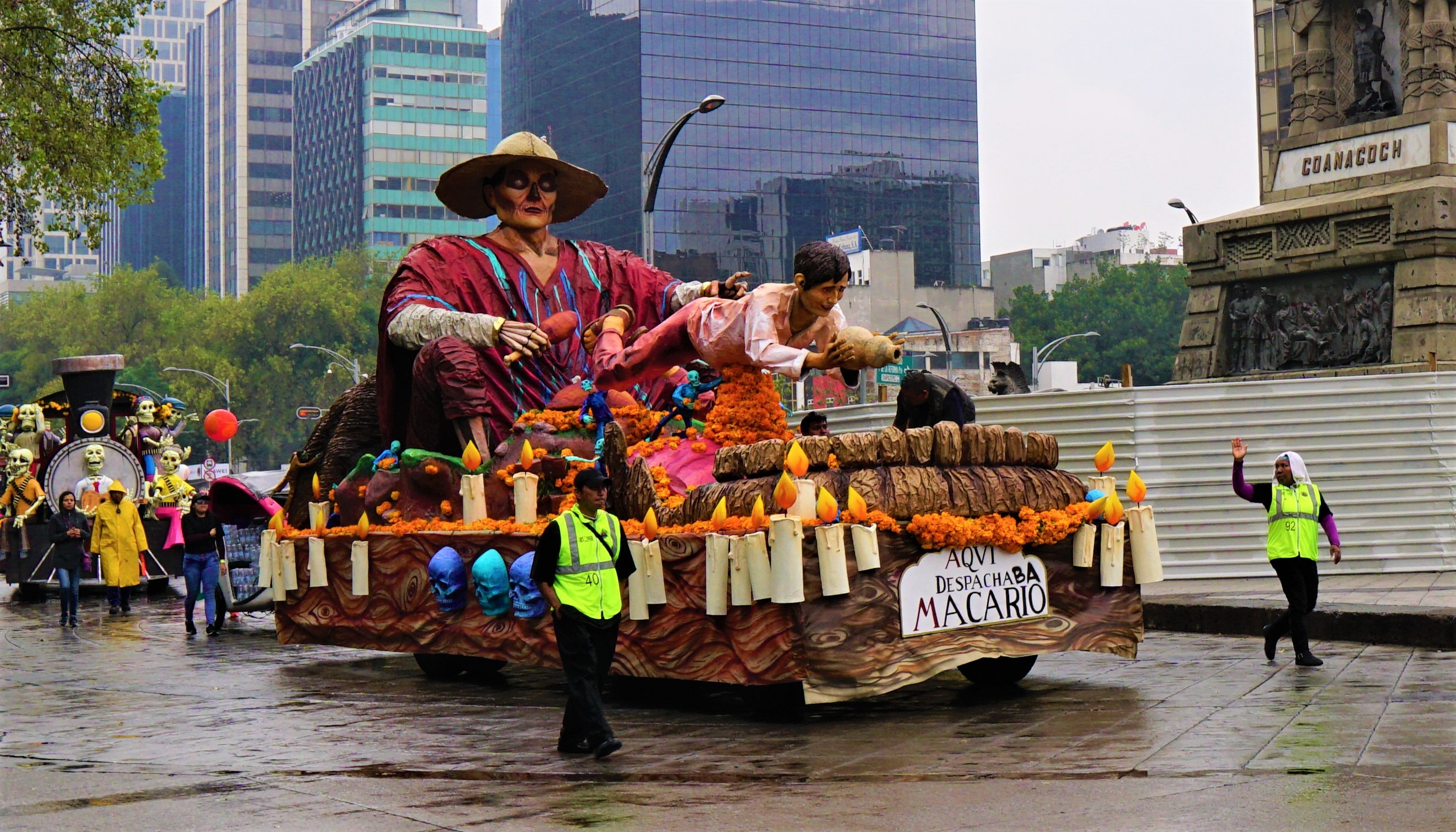 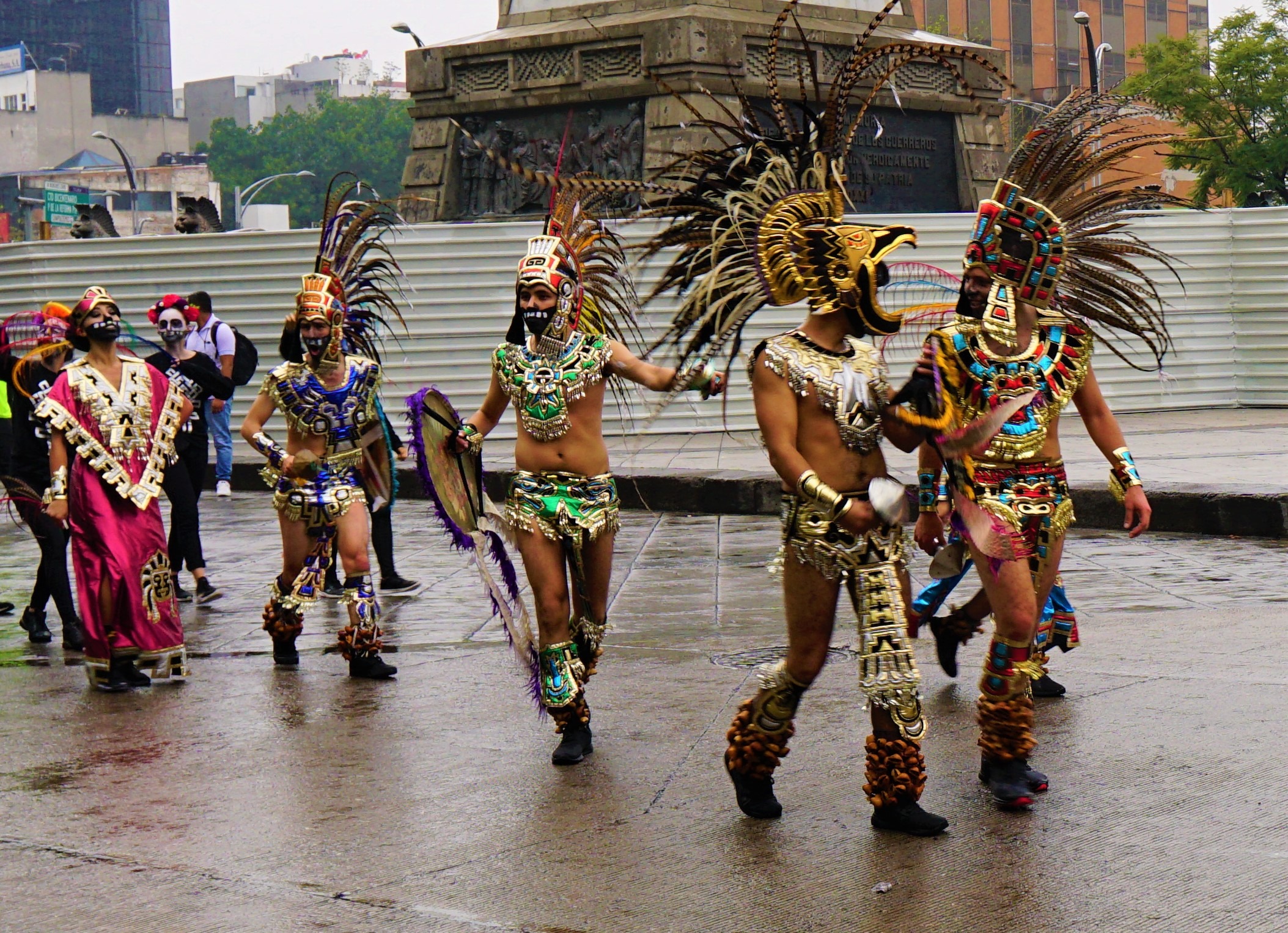 La Calavera Catrina (Elegant Skeleton), which I already mentioned a few times, is one of the most widely recognized symbols of the Day of the Dead.  Catrina is a well-dressed skeleton in a wide-brim hat, intricately decorated with feathers, flowers, and often, fruit.  Catrina symbolizes the joy of life in the face of its quickly approaching end and the Mexican ability to treat death with familiarity and even hospitality, rather than dread.  In our previous Mexico visits, we often came across depictions of Catrina in museums, stores, posters, books and saw how deeply ingrained into the Mexican psyche this symbol is, even outside of Day of the Dead.  That’s why we were so surprised to find out that the actual figure of Catrina is only 100 years old and was created by a printmaker and lithographer, Jose Posada.  Posada initially intended to satirize Mexican natives who were copying European aristocratic traditions, but Catrina quickly became a folk symbol of the Day of the Dead. 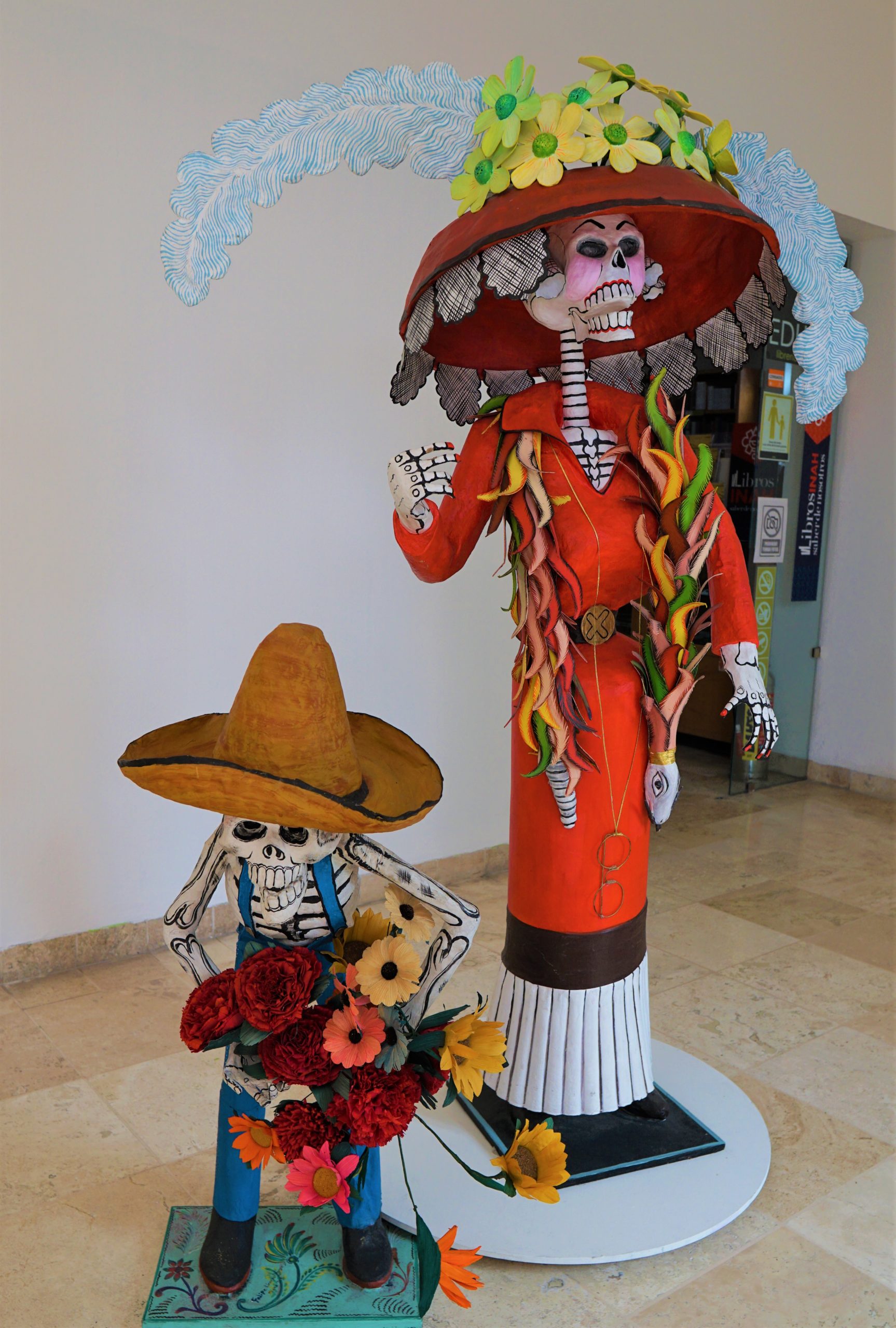 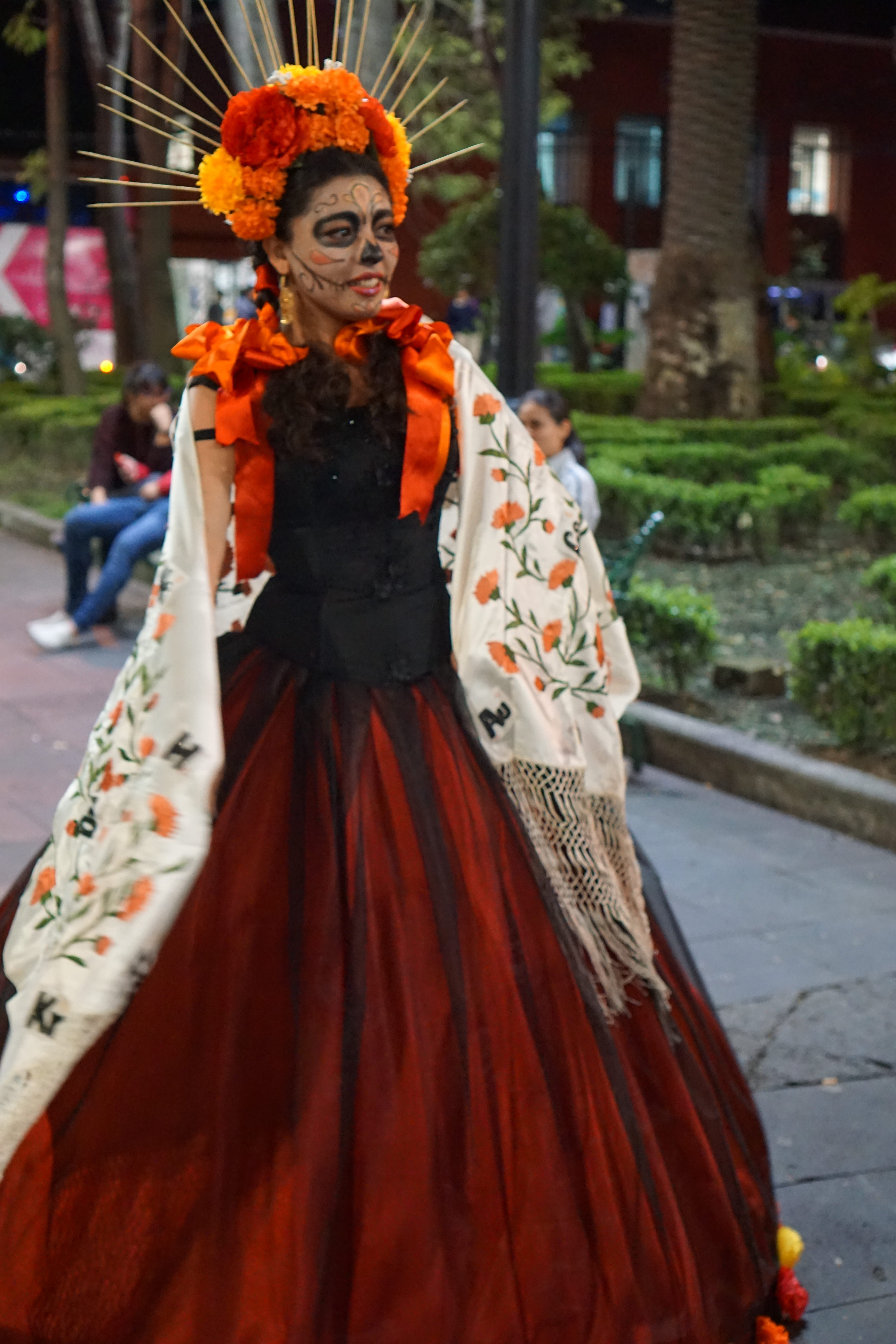 During Dia de Los Muertos, a lot of women paint their faces in colorful Catrina make-up, while men sport black-and-white skeleton faces. The first night, walking around the central square of the Coyoacan neighborhood, we saw plenty of people getting their faces painted and I immediately wanted to join in on the fun.  As we were having a lively discussion if it was appropriate for foreigners to participate in this traditional custom, we found ourselves being waved at by a young couple with a face-painting kit and shown photographs of various painted faces, to take our pick.  Twenty minutes later, you would not have been able to pick us out of a colorful crowd. Our most intimate face-to-face with Catrinas happened on the second day in the Xochimilco neighborhood when we were walking among food stalls, trying to decide whether chicken feet sounded like a delicious treat or a horrendous mistake, and stumbled upon a stage and a small audience, anxiously waiting for the show to start.  A quick glance around the audience stopped us in our tracks.  The first three rows were filled with older women in elaborate dresses, wide-brimmed hats decorated with everything from long luxurious feathers to a whole fruit buffet, lacy gloves, and meticulous makeup.  Every Catrina had her own decorative twist and no two were exactly alike.  Not sure what was going on, we decided to stick around and watch the events unfold.  Quickly it became apparent that we were witnessing Catrina competition for young-at-heart participants.  One by one, ten Catrinas were called on stage and then three of them were picked by judges for the top spots and given gifts and flowers.  The winning Catrina, an arresting woman with a gracious smile, was given a new microwave she couldn’t even carry off stage.   We stuck around after the Catrina competition and watched a twenty-minute dancing performance during which a casket was carried on stage, a mock dancing funeral was staged, and three dancers got pretend-drunk, pretend-drove, and pretend-died.  It was wild. The number of things to do in Mexico City on the Day of the Dead was overwhelming.  Everywhere we turned, there were alcohol festivals, music shows, costume competitions, and plenty of food.  But our most vivid memories from this weekend happened when we actually left Mexico City to visit an indigenous cemetery in San Andres Mixquic and see the most intimate part of Day of the Dead – a communion of family members with their deceased relatives on their graves.

Next Post:  A Night in the Cemetery – Picnic with Ghosts in San Andres Mixquic, Mexico 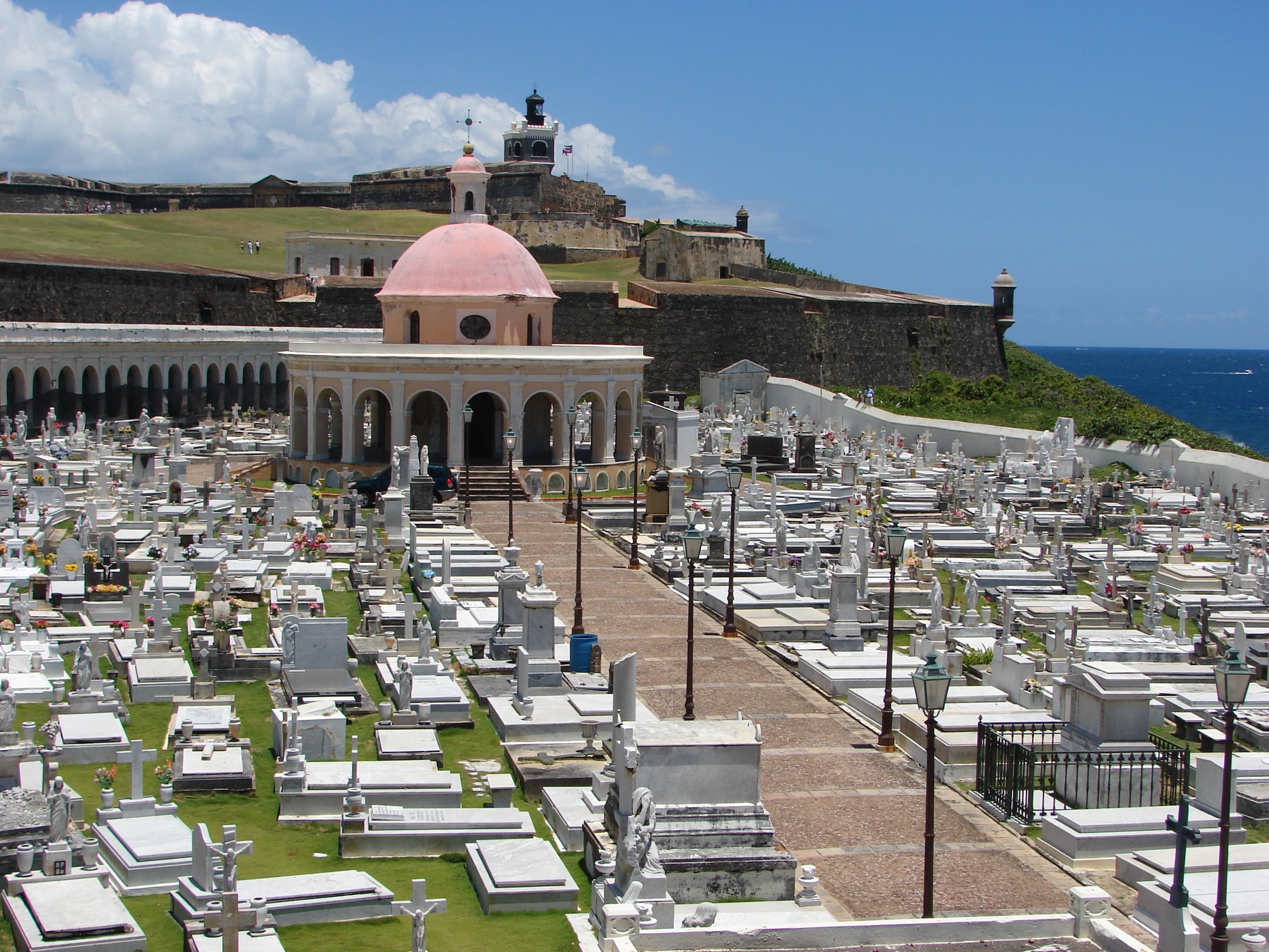 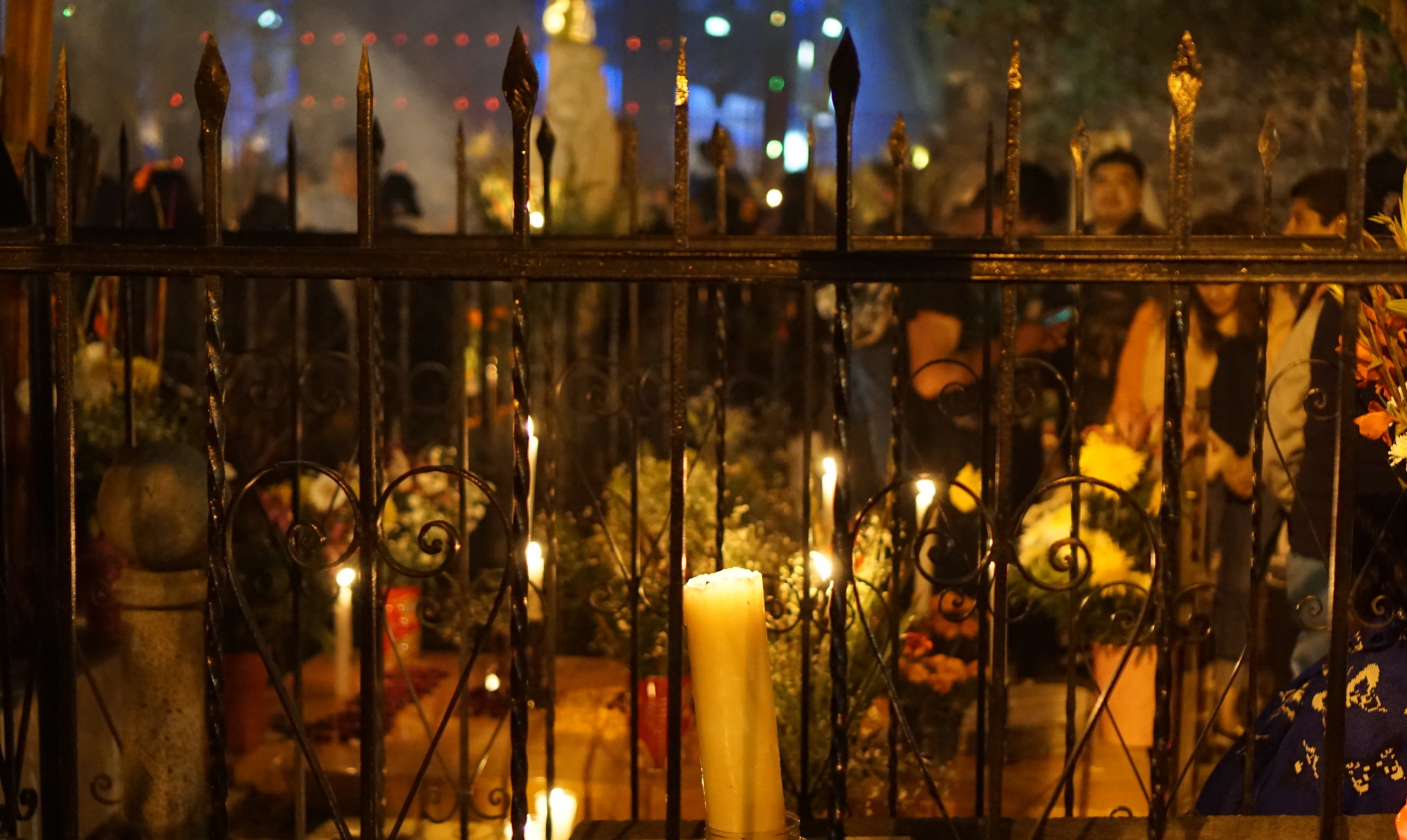 A Night in the Cemetery – Picnic with Ghosts in San Andres Mixquic, Mexico