Cambodia and Thailand – Us vs. Monkeys of the World 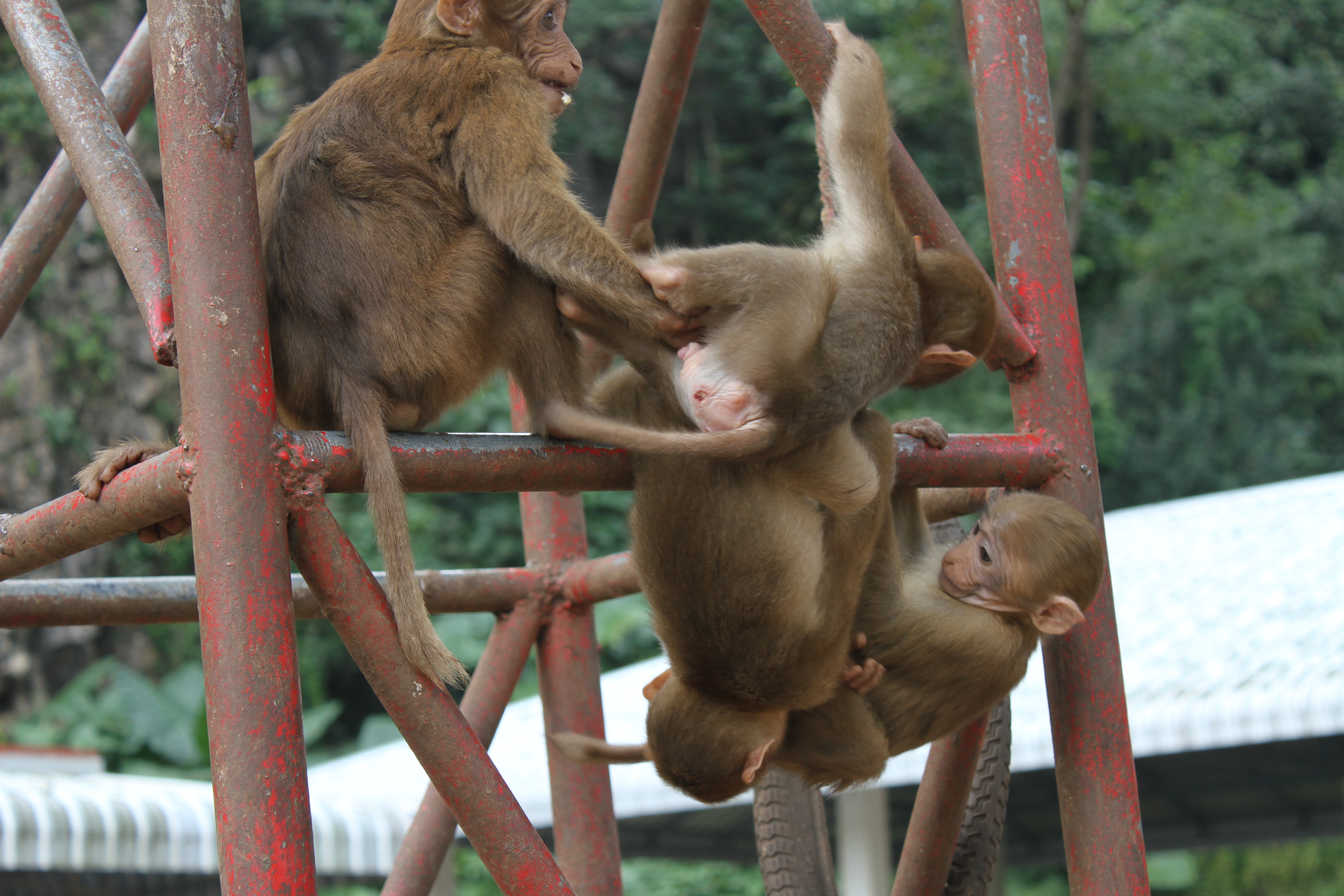 Everywhere in Cambodia, whether it’s the temples of Angkor, or the caves of Kampot, or the countryside of Battambang, if you see tourists gathering with cameras while the locals are rolling their eyes, it can only mean one thing – monkeys.  Macaques are cute and photogenic.  They are also vicious assholes who would love nothing more than to steal everything your own and probably eat your face.  But I am getting ahead of myself.

The first time we encountered monkeys was in 2013, during our first visit to Southeast Asia, in Thailand.  We specifically stopped by to visit Monkey Temple near Chiang Rai to… well… see some monkeys.  We disembarked a minibus and headed towards a mostly empty temple, not a monkey in sight.  The temple itself was pretty standard, as far at Thai temples go, picturesque ruins at the foot of a mountain.  Right in front of the temple, we found a small fruit stand selling nothing but bananas by bucketfuls.  The moment I pulled out a dollar to pay for a bucket of bananas, the fruit seller’s five-year-old son grabbed a large stick and started walking towards me.  Everything following happened as if in slow motion.

The fruit seller handed me a bucket of bananas.  I turned around and quizzically looked at the five-year-old, swinging his stick, like he was getting ready to bat.  I raised my head and looked towards the temple.  The mountain on the side of the temple was moving.  At first, I thought it was rocks rolling down the side of the mountain.  Then I saw – a hoard of brown monkeys was descending from the mountain, falling on the ground, swinging into the trees.  I looked at Victor.  He excitedly nodded and picked up his camera.

“Oh, that’s a lot of monkeys.” I thought, “I wonder if I have enough for everyone.  I should break bananas in half…” and then, as dozens of monkeys trampled towards me, I held out a lone banana.

Within seconds, the five-year-old started screaming and waving his stick, the banana was ripped out of my hands, screeching monkeys were climbing up my legs, grabbing my arms, trying to pull the bucket out of my hands.  I did the most logical thing I could.  I threw the bucket on the ground and hid behind the armed child.  I could hear Victor laughing and camera shutter snapping.  The monkeys slowly started dispersing, as the empty bucket rolled on the ground.

Now, years later, in Cambodia, we rolled our eyes along with the locals, as tourists swarmed around macaques, oohing and awing.  We had enough pictures of monkeys to last us a lifetime and enough experience being mobbed by monkeys to last several millennia.  We went an entire 14 days successfully avoiding monkeys in a country full of monkeys, only to make a rookie mistake on the very last day of our vacation.

We had half a day and decided to go to a market in the morning and then visit White Elephant cave in the early afternoon, before we had to catch our ride back to Phnom Penh.  At the market, we tried every strange food we saw and little baked balls of dough stuffed with seafood were our favorite.  We bought four to take with us.  “A picnic,” I said, “We’ll have a picnic in the caves.”  I was an idiot.

We arrived at the foot of the mountains and were immediately surrounded by children, clamoring to be our guides to the caves.  We hired the oldest and started walking through the field towards the stairs carved into the mountainside.  As we approached the mountain, I remembered my little grocery bag with market goodies, currently wrapped up in my straw hat in my hand.  I took the bag out of my hat and started putting the hat on my head.

Next thing I knew, it was raining monkeys.  Monkeys were falling out of trees and off the mountain rocks, screeching and already fighting among themselves.  The quickest of them landed right in front of me, immediately jumped up, grabbed my bag and started ripping it out of my hands.  I started trying to shake it off, but the grocery bag ripped and one single dough ball fell on the ground and was instantly swarmed and trampled by monkeys.  I clutched the rest of snacks to my chest and ran to Victor, to shove it inside his backpack.  Luckily, all the monkeys were distracted by fighting among themselves to notice that I still had food left.  By the time the monkeys turned their attention back to me, I already had my hands up, showing that they were empty, and was backing up towards the stairs.

At least this time, Victor didn’t have the camera handy to immortalize my shame forever.  But the worst, or according to Victor – “the best” part of the whole encounter happened just a minute later.  We started ascending up the stairs and a giant old monkey walked down the rail past us.  As I moved away from the rail to let him pass, he stopped, and in a very paternal manner patted me on the shoulder, kind of like, “Oh, don’t be upset, they are just kids…”

Worst part of being robbed by monkeys is another monkey taking pity on you.  Or maybe I misinterpreted the whole situation and he was patting me down to see if I was still hiding food on me.  Either way, the moral of the story is don’t mess with monkeys – they have nothing to lose and you have delicious snacks.

2 thoughts on “Cambodia and Thailand – Us vs. Monkeys of the World”