Cambodia – The Way We Travel 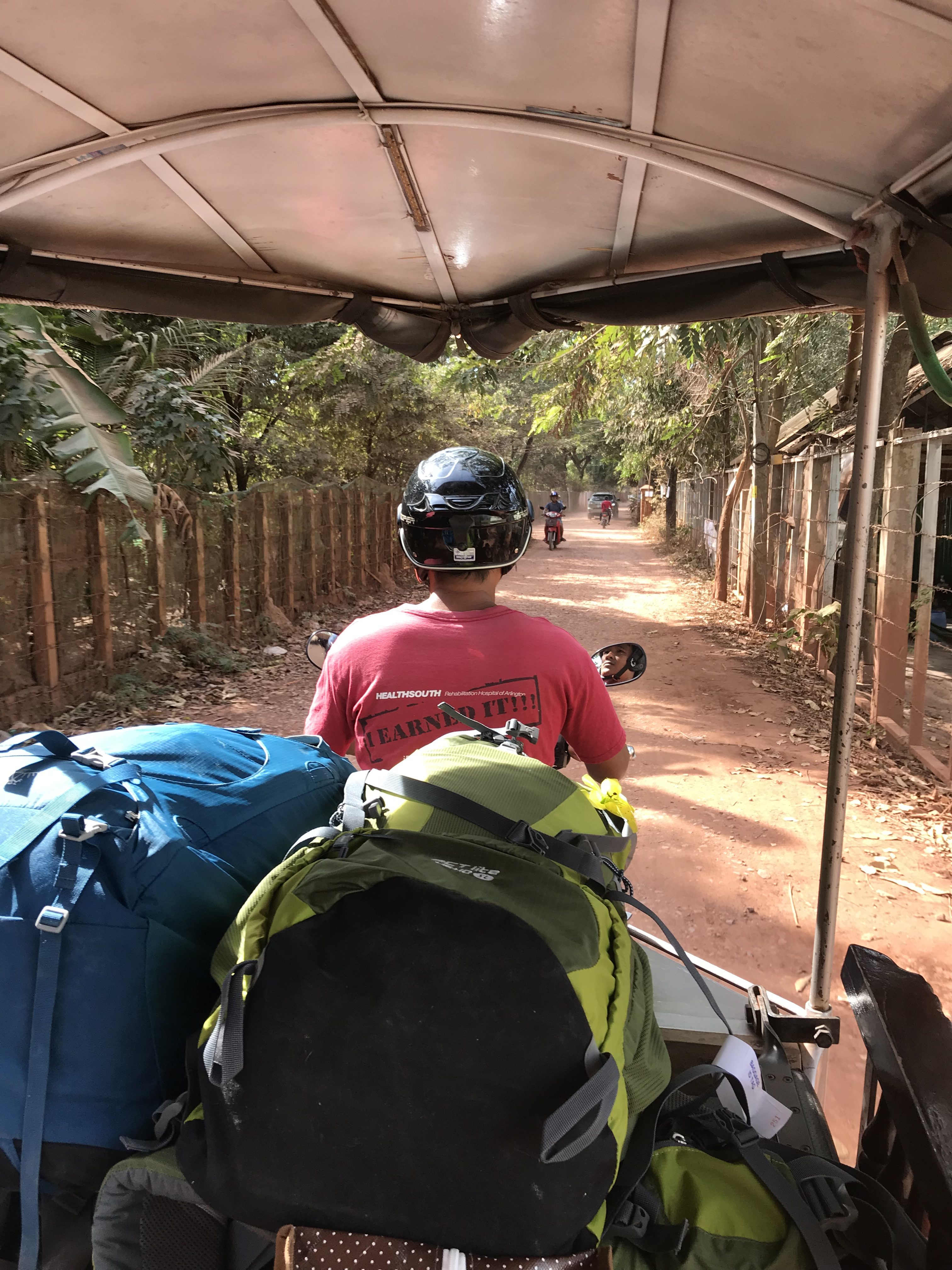 I was lounging in a round wicker chair in a pretty courtyard of our little guesthouse in a middle of Seam Reap, chatting with our charming young hostess, Fara.

“So, where are you going after this?” asked Fara, with only slight traces of Cambodian accent in her fluent English.

“Taking a plane to Sihanoukville, going to spend a few days on an island,” I said.

Fara looked impressed.  “And where did you come from?”

I paused.  I wasn’t sure if she was asking the city we visited before Seam Reap or where we live or where my distinct Russian accent is from.

“Thailand? Vietnam?” Fara volunteered, seeing my hesitation.  I laughed.  This was a common scenario in Cambodia, replayed again and again with Tuk-Tuk drivers, waitresses, hostesses, and even tourists we chatted up.  It seemed like no one came to Cambodia just for Cambodia.  Cambodia was always a stop on the tourist’s itinerary, wedged in a two-week trek across Thailand or a quick stop on Southeast Asia hopping tour of major sites.  Tourists were forever stopping by to a world’s largest temple site, Angkor Wat, and then heading right back to Thailand or moving on to Vietnam or Laos.  Fara, running her parents guesthouse since she graduated college, must have had hundreds of these conversations each month with her guests, but rarely heard what I told her next.

“Oh, no!  We are in Cambodia for two weeks, our entire vacation.  We started in Phnom Penh and will finish in Kampot.  “Oh, wow!” Fara sat up straight, “That’s so great!  We have a beautiful country, so much to see, but all tourists only come to Seam Reap to visit Angkor Wat and skip everything else.  Where else are you going?  Battambang? Kratie?”

A few days before this, I had an almost identical conversation (at least in spirit) about a completely different country.  We were in Battambang, a small city in northwest Cambodia, usually skipped by the majority of tourists, riding among the rice fields, through tiny villages, on a rickety bamboo train.  “Train” is not quite the right word.  It’s called a norry and is actually a small bamboo platform sitting on top of four wheels, clattering along abandoned railroad tracks, at impressive 18mph.  Every time two norries meet, one would have to be completely disassembled to allow the other the pass through.  For whatever reason, all three times we found ourselves face to face with another norry, it was the other party that had to grumpily climb off, while our driver helped their driver to take the norry apart.  The one time the other norry driver looked like he had a problem with this arrangement, our norry driver simply pointed at us and the other driver immediately started deconstructing his norry.

“It’s because we look intimidating,” I ventured.

“It’s because there are three more trains behind us,” Victor sighed.

Anyway, we had a 10 minute stop in the middle of our ride and sat in a small shop, drinking coconuts and chatting with another couple of tourists from the Netherlands.

“We were in the Netherlands earlier this year,” I volunteered to keep the conversation going.

The man patiently smiled and the woman just slightly rolled her eyes as she said, “Amsterdam, right?”

“Oh, no,” I said, “We flew in to Amsterdam, but didn’t stay there.  We went to Rotterdam, The Hague, Leiden, Haarlem…”

The Dutch couple sat up straight.  “Really!  No one visits the rest of our country.  Everyone just stays in Amsterdam.  How did you like it?” and on and on the conversation went about various parts of the Netherlands and usually unvisited parts of Europe.

I found it a little funny that we met this couple in mostly unknown part of Cambodia, yet they immediately presumed that upon arriving to their country, we would have only stayed in the most popular area.  “We like off-the-beaten track destinations as much as the popular spots,” Victor explained and the couple nodded along, excitedly.

This has been the theme of our recent travels in the last few years.  Once we covered most touristy destinations in Americas and Europe, we went back to some of the countries to visit less touristy areas and ended up loving the second trip as much as the first venture, when we usually checked off the “top ten destinations” list.  We started treating visits to new countries as a foray into an entire country, rather than just the major sites.  Spending two weeks in Cambodia allowed us to learn the history and cultural traditions, take a peak at everyday life of common people, and amass a ton of stories about Cambodia as a country and us, a couple of unsuspecting travelers, trying to navigate a very unfamiliar landscape.