Ever since we started seriously traveling, we usually take two weeks either around Thanksgiving or Christmas/New Year for a long trip out of the country.   To date, we have celebrated New Year watching fireworks while wearing white and drinking champagne with locals on a beach in Brazil; lost in a crowd of thousands, listening to live bands accompany a giant fireworks display in a large city square in Bangkok, Thailand; surrounded by picnicking families and children shooting fireworks on a beach in Sihanoukville, Cambodia; and in a hut in rural India.  One of these is not like the others.  And not just because of the missing fireworks.

But let’s start at the beginning.  How did we end up there, in a tiny village by Orchha living in a “Westernized” hut, surrounded by farm animals and not a single firework in sight?  It's far less complicated than it sounds.  Victor is usually the one who plans out the itinerary for all our trips, while I take care of booking transportation and lodging.  We knew that New Year’s Eve is usually not a cause for a giant celebration in India, so Victor didn’t try to arrange for us to be in a large city, as he did in Thailand.  It so happened that our itinerary planted us directly in the rural countryside and we decided just to roll with it.  A lot of websites refer to the small town of Orchha as a “hidden gem of Madhya Pradesh province” and in fact, it is.  There is a beautiful Fort Complex with various palaces and rich history hidden among the rolling hills of the countryside and we were looking forward to discovering all of it.  At the time I thought it might be interesting to see how average small-town residents celebrated the holiday.  I didn’t realize that these villagers would only stay up late to see how we, foreigners, celebrate the New Year. On our way to Orchha, our trusted guide and driver, Sunil, reminded us repeatedly to bring a lot of bottled water to our homestay in Orchha, as there will be nowhere to buy bottled water in the village.  As we were pulling into the village, with a few liters of water in the trunk, I suddenly remembered that today was New Year’s Eve.

“Sunil!” I said, “Can we buy champagne anywhere?”

Sunil stared at me through the rear-view mirror as if I suddenly lost my mind.  Honestly, I realized how idiotic this sounded the moment I said it.

“I can try to find some alcohol…” Sunil said uncertainly.  And to his benefit, he did.  A few hours later, he presented us with a 100-gram bottle of something like homemade brandy.  After we got back to the US, we found out that there was a wave of deaths in India caused by bad bootleg liquor, so we were actually very lucky that the worst thing about our liquor was how it tasted.   But at that moment, we were all set for the evening celebrations. 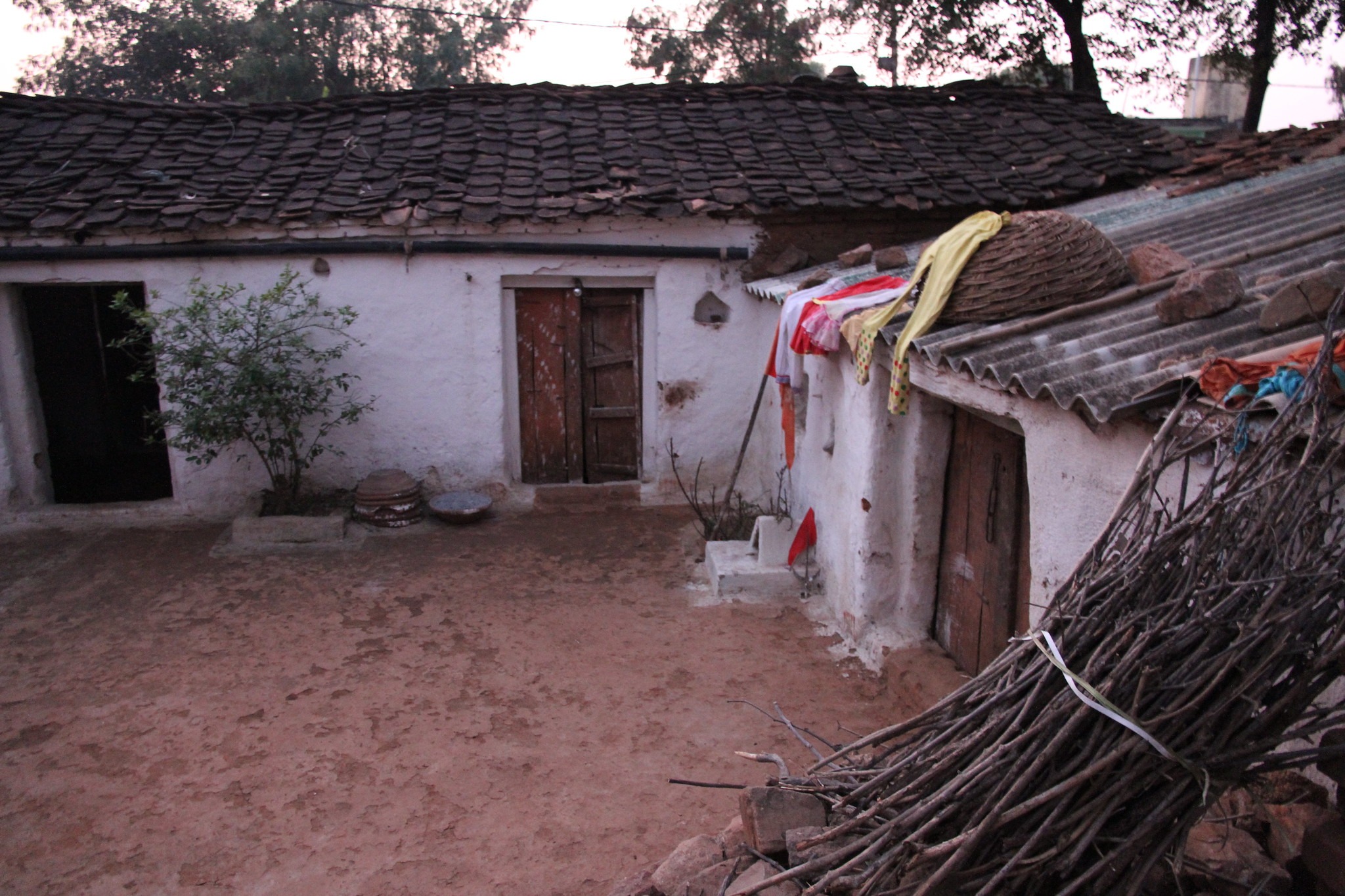 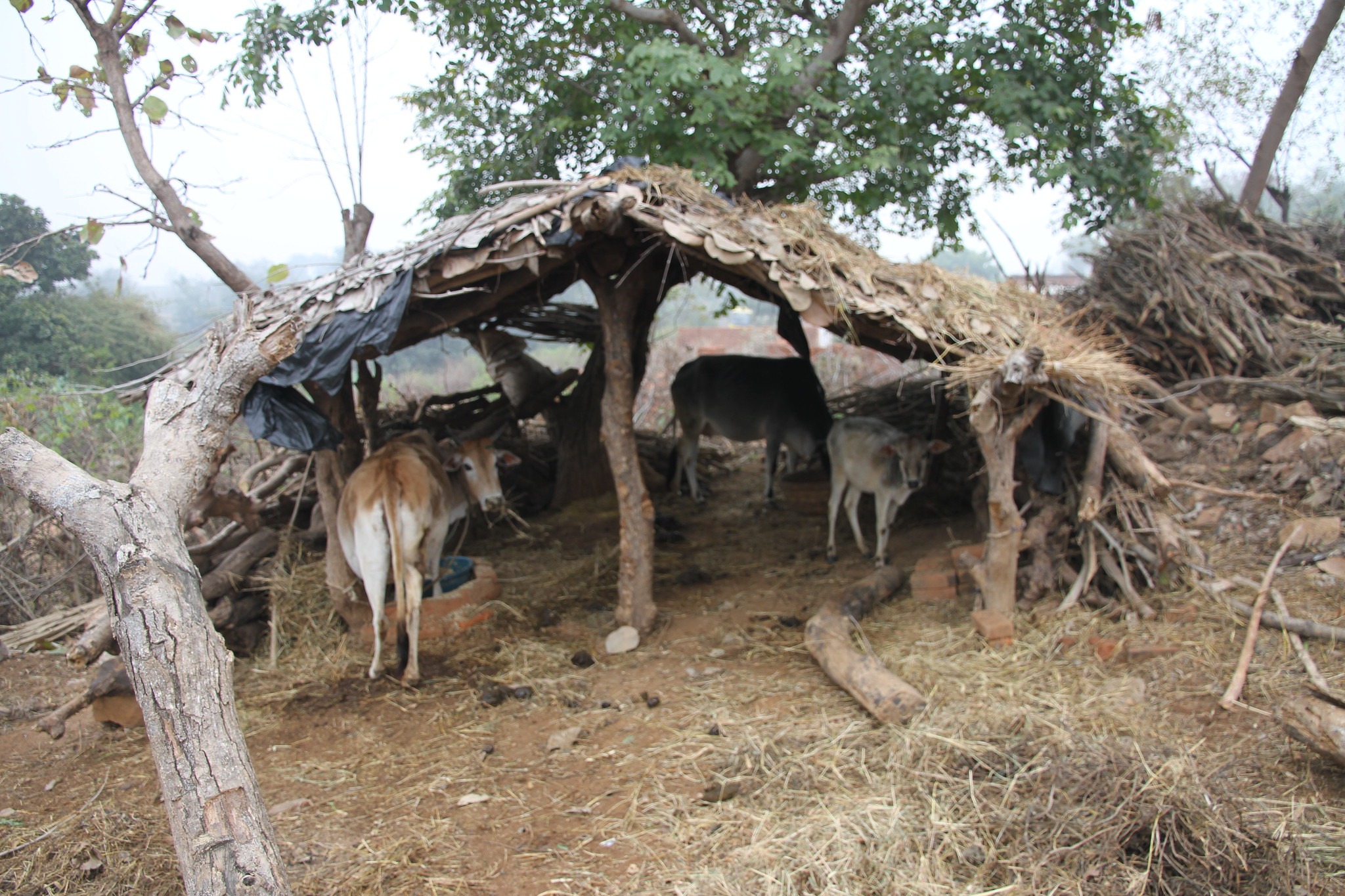 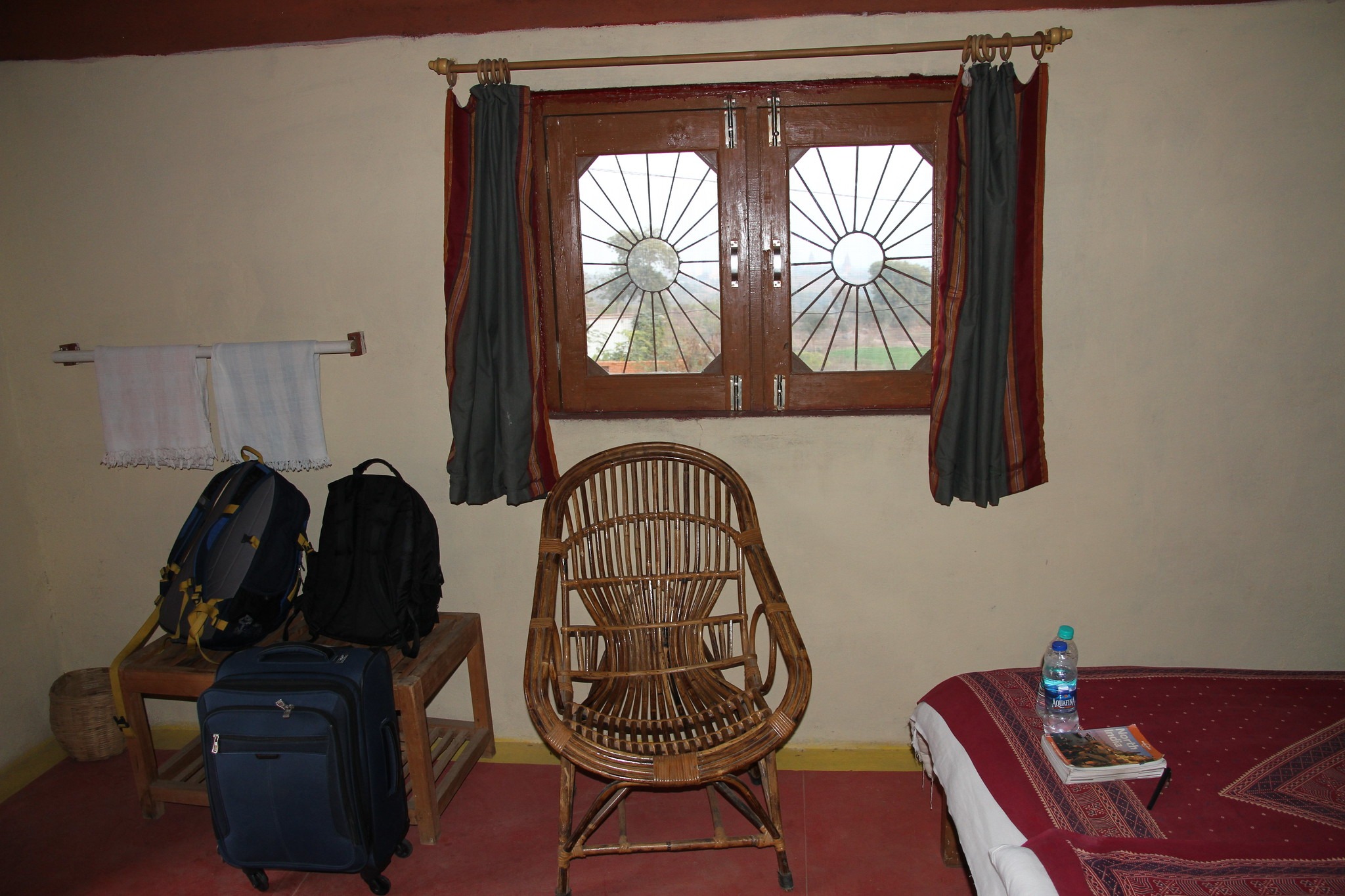 In the meantime, we met our homestay family and checked out a little one-room hut in their yard built specifically for tourists – three twin beds, a few wicker chairs, and a mosquito net.  The crown jewel was an outdoor Western-style toilet, proudly shown off by the family’s 10-year-old son.  He swung open the door of a small wooden structure and gestured with his hand as if revealing a hidden treasure: “Toilet!”

There was, in fact, a white porcelain toilet inside.  Victor and I both immediately looked impressed, which made the boy incredibly happy.  A small hut next to it was the family’s toilet – a hole in the ground with a few wooden planks around it.   This toilet did not get a fancy presentation.

Another boy no older than three gaped at my camera, so I picked it up and took a few snapshots of him.  I am not even sure he understood what I was doing.   I turned my camera screen to him and showed him his own picture.  His eyes grew wide and he giggled.  I turned off the camera and he whined, pointing at the camera again.  I turned the camera on, turned on picture preview, and scrolled to his picture.  He stared at it silently.  I turned off the camera again, only to have him grab the camera, turn it back on, turn on picture preview and scroll back to the same picture.  He did it with absolute ease as if he has been handling DSLRs his whole life (the entire three years of it).  Now, it was my turn to gape at him.  It is incredible how easily little kids pick up skills.  I have a feeling that if I left him my camera, he would be a professional photographer in no time.

There were a lot of children in the village and none of them, not even the toddlers were monitored by adults.  It seems that when a kid gets old enough to wander away, he becomes old enough to be on his own.  A very serious group of two and three-year-olds were waddling through tall grass in the field right outside our family’s gate, no adult in sight.  They all had eyes painted with something like black mascara pencils.  Turns out this is a common method in Indian villages of warding off the evil eye. Inside the family’s hut, the mother was preparing dinner for her family and us.  She rolled out the dough right on the ground and threw small flat disks of it on a rock balancing over a cooking fire.  Once the dough crisped up on the rock, it was removed and thrown directly into the fire.   The dough sizzled and puffed out in perfectly circular forms and then, hot air whistling out of it slowly lost its round form once removed from the fire. I watched with fascination, only partially aware that this was my dinner being prepared.

As we sat on the colorful rugs on the floor to eat dinner, we were handed metal plates with steaming white rice, fried bread rotis, curry, and roasted vegetables.  Everything on the plate was cooked from scratch right before our eyes on a dirt floor of a small hut.  We dug in, hungry from the day of sightseeing, barely giving another thought to what an American food inspector would have thought of this setup.  The food was hot, fragrant, and delicious.  As we ate, the family’s small child started trying to explain something to us, excitedly pointing to a pile of blankets behind me.  His mother lifted the blanket, to reveal a large upside-down wicker basket.  As she lifted the basket, a tiny baby goat escaped from underneath and started trampling around the room.  Both Victor and I gasped and laughed as the kid (the goat, not the child) ran around, making hysterical high-pitched sounds, and finally settled down right by Victor’s lap.  Turns out he was being kept inside as he was too young to tolerate cold nights outside.  No matter how hard Michelin-starred restaurants try to surprise their guests with extreme food presentations, they will never come close to “a baby goat suddenly jumping out from nowhere and trampling all your guests” amazement. 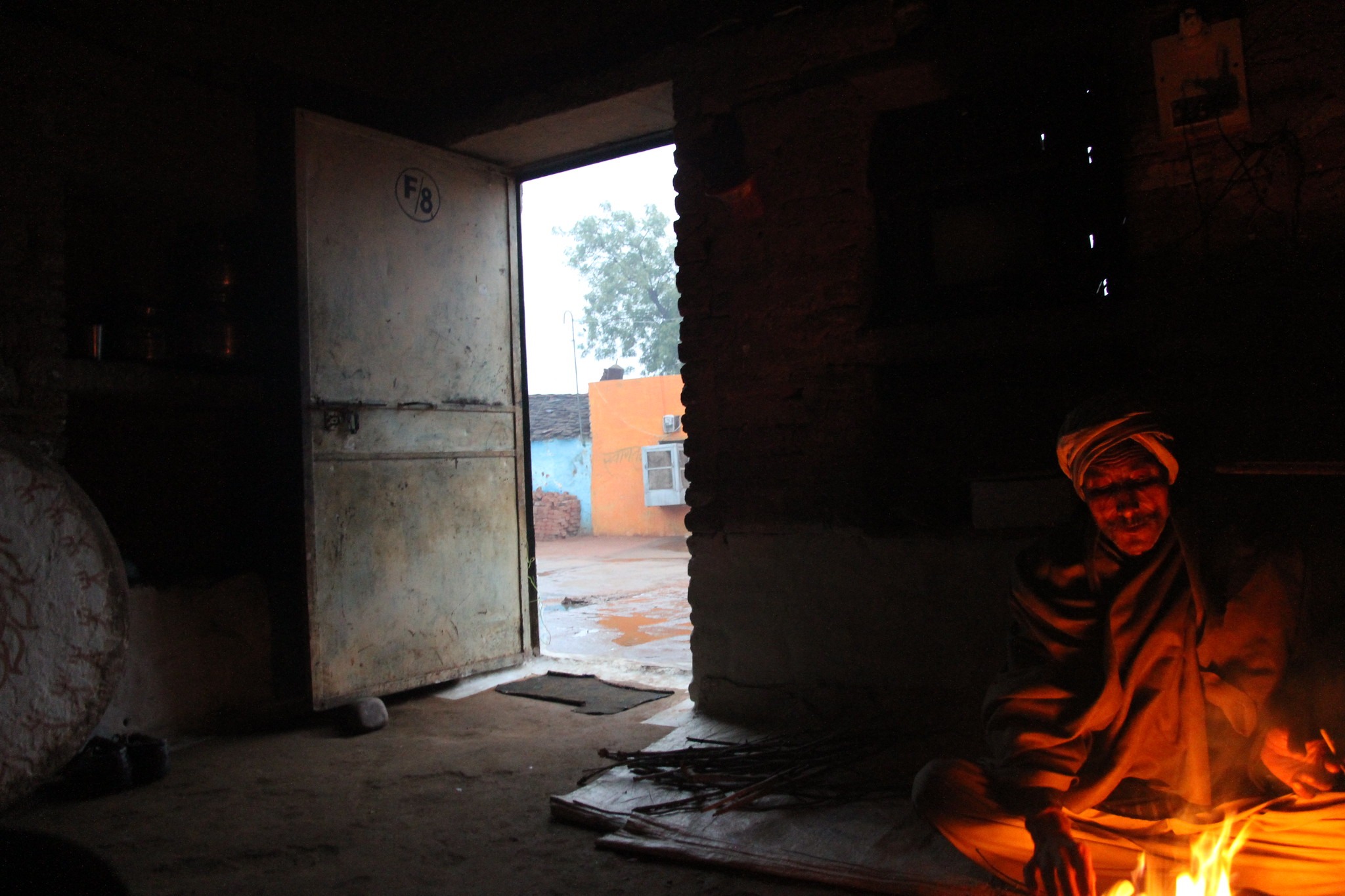 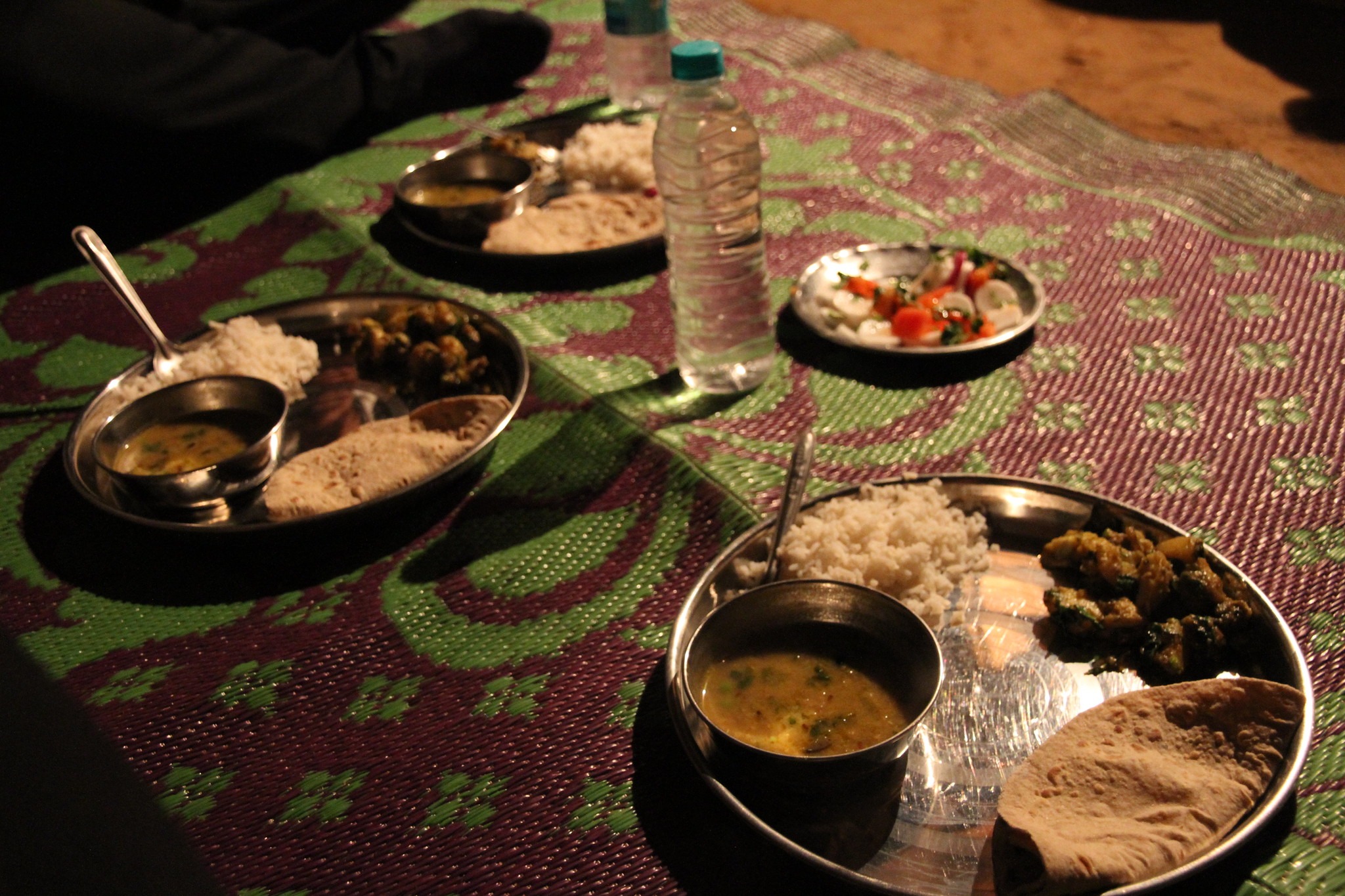 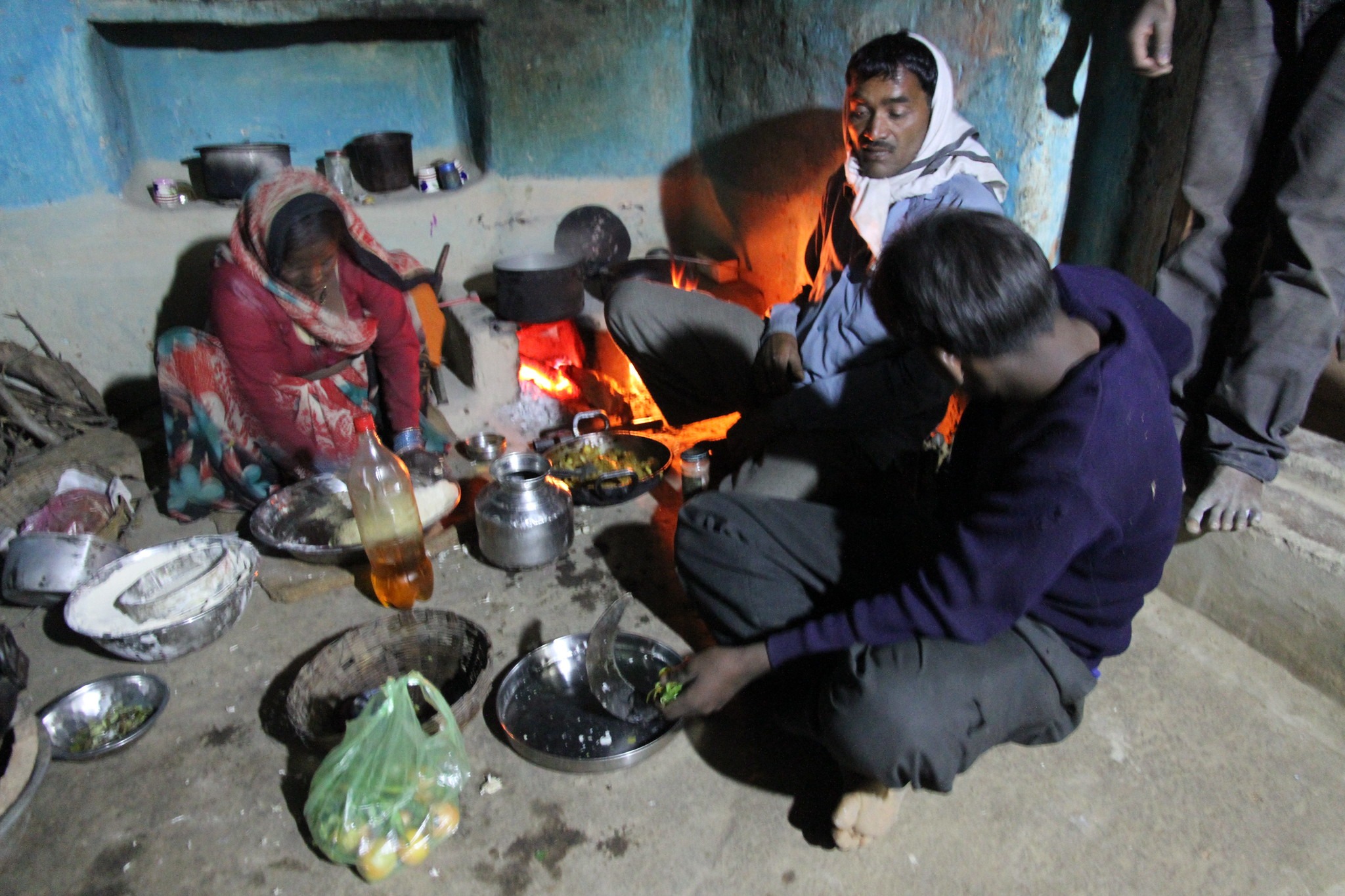 At around 10 pm we went to a central house in the village where everyone was gathering to celebrate the New Year.  All Indian families sat on the porch floor, silent, intently staring at the white guests.  The white guests, namely half a dozen French tourists and us, sat uncomfortably on the only available chairs and stared back at the families.  Once in a while, a small child would start whining and would immediately get shushed by an elder with a tone that promised that at any point now the white people are going to start the wonderous and incredible ritual of New Year celebrations.  A few of the Frenchmen were trying to hook up a speaker and eventually succeeded in playing a nice slow French melody.  One of the French women was trying to get the local kids to dance.  The children stared at her trying to mimic dance moves without any shred of understanding.  Finally, Victor and I decided to retire back to our hut and bring in the New Year with our newly acquired bottle of “almost brandy”, each other, and Sunil.

In the hut, Sunil watched Victor opening the bottle with visible curiosity.  He refused a drink, explaining that he had never drunk before… and never seen anyone drink as Hinduism forbids the consumption of alcohol.  As we counted down from ten at midnight, cheered, and raised our glasses in a toast, Sunil gawked at us sipping and wincing at the taste of the brew.  I could only stand a few sips, while Victor, somehow, managed to almost finish his drink.  For the next 15 minutes, Sunil kept staring at Victor, as if he expected some kind of an incredible transformation to happen.

“How do you feel?” he kept asking.

“It was just one drink,” Victor answered.  “I am not going to get drunk from one drink!”

Keep in mind, this is the same man who had no problem bringing tourists to an opium ceremony and laughed at me when I freaked out in a restaurant afterward.

It wasn’t the most exciting of New Years, but what it lacked in fireworks, it certainly made up in good-natured attempts at bridging the gap of cultural differences.  For once, it was the host’s culture struggling to understand Western customs and tastes.  As we travel, we are the ones usually lost in the intricacies of the local religion, culture, and way of life, trying to make sense of what we see and experience.  But watching a small rural Indian village trying to understand the spirit of New Year and Sunil’s attempt to understand alcohol consumption was a very strange role reversal. 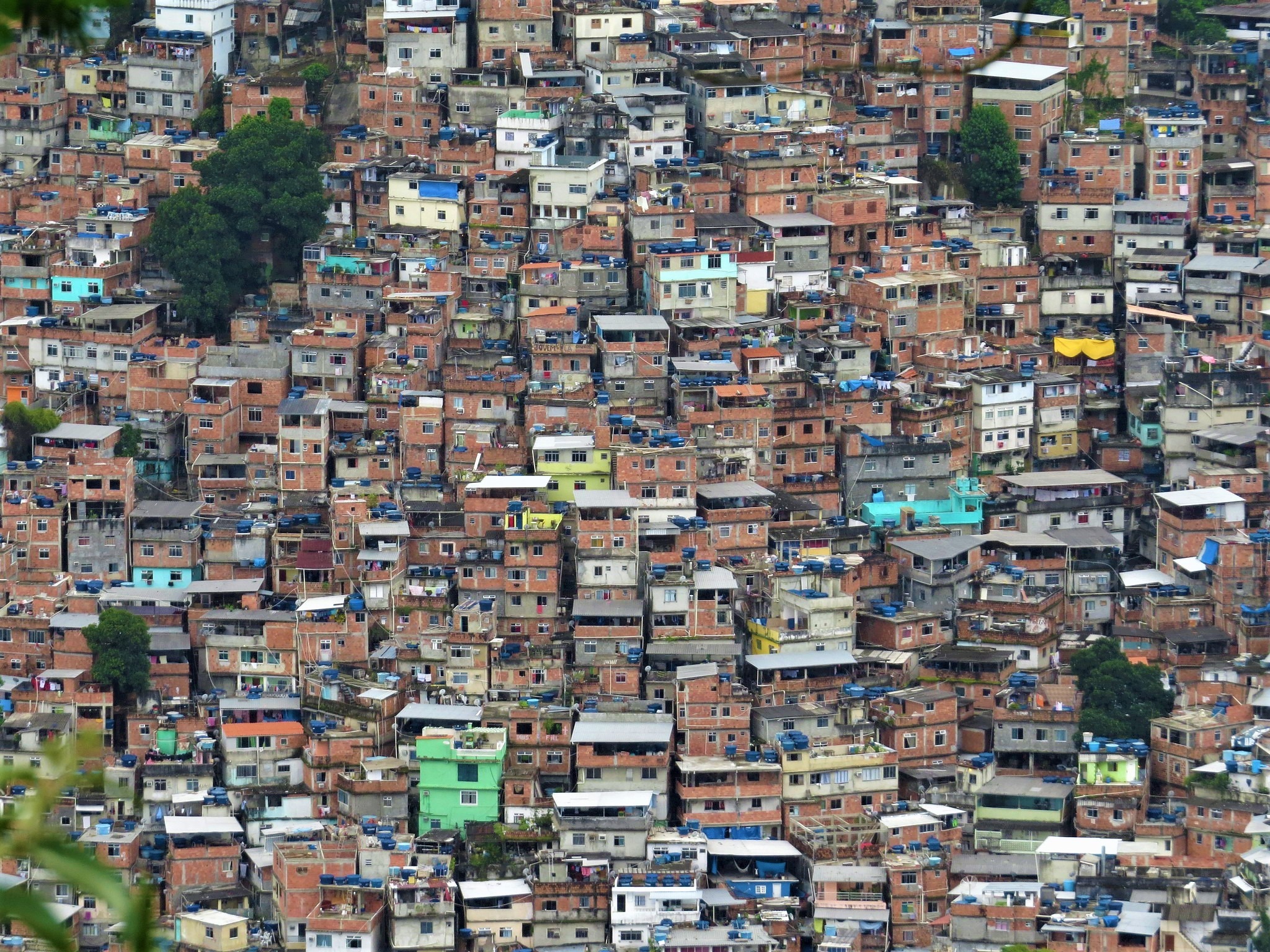