On the fourth day in Tallin, we were in a back seat of a taxi, chatting with our Russian-speaking driver about the intricacies of the daily life of ethnic Russians in Estonia.

“I’ve never been to this one,” he said as he pulled the car over. “Enjoy!”

I peeked out the window. A large, grey stone building with decorated windows and roman columns by the front door was looking very out of place among surrounding wooden houses on a quiet residential street.

“It looks like a theater!” Victor exclaimed and I instantly agreed. In fact, I had to double-check Google maps that we were at the right spot and not at a theater.

The front of the building was blocked by a construction fence, and it was very unclear how to get inside. After a short debate, we decided to go around the back. As we turned around the corner, we found ourselves in a small overgrown backyard with a completely naked man sitting on a bench. He appeared to be fully relaxed, leaning back, squinting at the sun, and nursing a beer.  As he became aware of our presence, he made exactly one movement to accommodate our unexpected appearance – he quickly closed his legs together. While I am usually eager to ask strangers for directions and this search for an entrance was already taking too long, this time I just walked silently past.

We ended up back in front of the building and quickly realized that we went the wrong way and the path to the front door was only a few steps from where we were initially dropped off. As we walked into a large marble vestibule, a woman behind the counter cheerfully greeted us in Russian.

To be more specific, this was Kalma Saun, one of the most popular Estonian saunas in Tallin. Saunas are a key part of Estonian culture and history, going back thousands of years. Commonly found in Finland, Latvia, Estonia, and Russia, the bathhouse traditions vary a bit between countries, but the common elements are the same – hot and humid sauna sessions accompanied by rigorous whisking with birch branches, called vihd in Estonian or venik in Russian, alternated with cold plunge pools or chilling showers, and followed by copious amounts of beer.

Despite having spent my childhood in Russia and Ukraine, I have never been to a banya.  We visited thermal pools in Iceland and an onsen in Japan, but I somehow missed out on experiencing one of the most popular Russian customs of a public bathhouse involving ritual nudity and extreme temperature changes.  Victor’s family, on the other hand, had their own banya in their backyard and he grew up using it weekly. So here we were, a newbie and a pro, inside historical Kalma Saun, at last.

Victor got right to business, “We want one hour, please, private sauna.”  He picked out a birch venik and bought himself a beer and kvass for me.

I, on the other hand, was anxious about the whole experience.

“Are there any instructions?” I asked the sauna attendant.

She stared at me incomprehensibly.

“How to use the banya?” I clarified.

“It’s a banya!” she exclaimed. “What instructions?”

I could hear Victor giggling behind me. We were shown to our private sauna where we found a cozy lounge with a leather couch, a small steam room with wooden benches, and a spacious shower room.

The temperature in the sauna was comfortably warm, but surely not hot and humid as advertised. I started searching for a way to turn up the heat – a button, a valve, a thermostat, something to press or turn to get the room steaming and heated.

Behind me, Victor was also searching for something.

I stopped and stared at him. What in the world could he possibly need a ladle for?  Is he planning on washing himself by filling the basin with hot water and pouring it on himself using a ladle?  Surely not, there is a shower right there!

I continued my search for a way to turn on the heat in the sauna when I heard Victor celebrating the successful discovery of the ladle.  He filled the basin with searing hot water and dipped the ladle in, filling it to the brim… and threw the hot water on the pile of rocks in the corner of the steam room.  The rocks immediately started hissing and released a thick plume of steam.  The air in the room instantly became hot and humid.

I stared at the rocks incomprehensibly.

“Banya!” Victor yelled.  “Do you honestly not know how any of this works?”

I honestly did not.  And if I did know that this is how it was done historically, I would have presumed that a highly technological country such as Estonia would certainly have moved beyond the “throw hot water on hot stones” method of the sauna to something a bit more sophisticated…

In the meantime, Victor stretched out on the wooden bench.

“Grab a venik!” he instructed.  I gingerly picked up a dried-up bundle of branches and carried it over to him.

“What are you doing?” he asked, “Are you planning on whisking me with a DRY venik?”

I dipped the venik into the basin with hot water and then started rigorously whipping Victor’s back and legs with it.

“Are… you… mad… about… something…” he gasped. “Why are you beating me like this?”

“How am I supposed to know!  I asked for instructions, and no one gave them to me!”

He showed me how lightly tap the venik against the back and legs and use it to fan the back of the neck and bottom of the feet.  The hotter the temperature inside the sauna was the less movement of the venik was required to get the blood circulating and the skin tingling.

We alternated humid and hot sauna sessions with cold showers and finally finished off with a cold beverage in the little lounge.  As I nursed cold kvass on a leather couch, I thought of everything I knew about banya growing up in Russia – a body and soul cleansing pagan ritual, a health spa, an exfoliating massage, a social club…  Everything except how to actually do a proper banya.  Estonia, as it turns out, was an excellent place to fill in all the gaps. 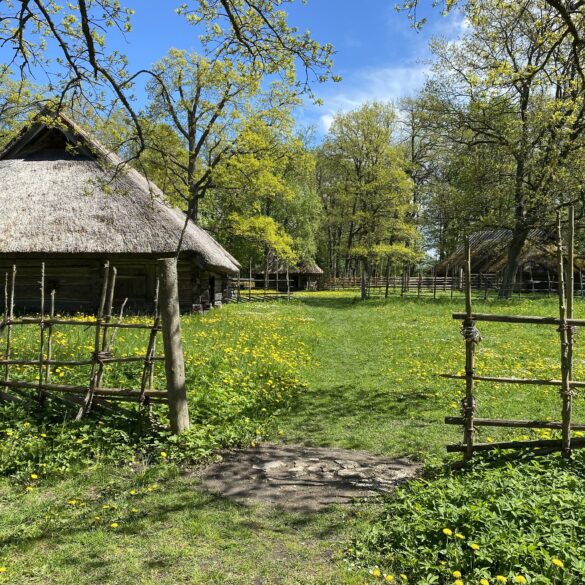 Fake Estonian in a Fake Village