A year ago in Cambodia, we had the misfortune of spending a night in the rat-infested, side-way leaning, bamboo bungalow which simultaneously happened to be 20 feet from a busy road full of thundering trucks, while also tilting into a muddy river where local fishermen started their morning calls to each other at 4 am.  Unsurprisingly, we were having a less-than-usual-cheery morning.  Trying to take my mind off the noise of rats fighting on the tin roof of our regrettable home, I tried to concentrate on planning out our day.

“We can visit Bokor Hill station today,” I said.  “It’s an abandoned mountain resort with French colonial buildings.  The way to get there is by renting motorbikes….”

Julia gasped, her face contorted with confusion and horror.  She was in the middle of eating what she later described as the “worst thing I have ever put into my mouth” – a pancake that happened to be basically raw dough in the middle and burned to a crisp on the outside.  She was braving through her breakfast, ignoring the rats and the creaking of the bungalow that seemed to be ever slowly sliding into the river as we sat inside it, but the single mention of “renting motorbikes” seemed to have completely broken her.

“You want us to rent motorbikes…” she said slowly. “Are you insane?”

She did have some kind of a point.  There were no discernible traffic rules in Cambodia, the roads were full of potholes, animals, and darting children, neither of us had ever operated a motorbike before.

“Or we can buy a tour on a minibus!” I shouted, hoping to stop the insanity.

On a motorbike…” Julia incredulously repeated.

“On a MINIBUS!” I said forcefully and that finally broke the loop.

An hour later, as our minibus was shaking and jumping up a narrow winding road into the mountains, Julia turned to me and in a concerned voice whispered, “A motorbike?!” before turning back to stare out of the window.  That was the last we spoke of motorbikes for a full year. A year later, we were now in Vietnam in the city of Hue, waiting to cross a wide street full of motorbikes.  I glanced sideways at Julia. I was not looking forward to the conversation we were about to have.

Here’s the thing about Vietnam that makes it different from most other Southeastern Asian countries, besides the Latin-based alphabet and communism – the absolute and total lack of tuk-tuks.  Tuk-tuk is an automized rickshaw on three wheels and motorbike type front and is very common in Thailand and Cambodia where we used them almost exclusively to get around within cities. Vietnam, on the other hand, deemed tuk-tuks a road hazard and banned them years ago.  We got around Ho Chi Minh City by using taxis off the Grab app (Vietnam’s version of Uber and Lyft), but Hue was a different story. The sites we wanted to see in Hue were widely spread out, on average 10 miles between the sites, with some sites far outside the city. I didn’t want to deal with having to find a new taxi between each site and renting a taxi for a full day was going to be expensive.  I also didn’t want to be stuck in a minibus tour that would involve multiple lengthy shopping stops, at the cost of the sightseeing I wanted to do. There was one very simple solution, which unfortunately involved possibly breaking Julia again.

Remembering every mistake from a year ago, I dragged her inside an upscale café, despite her protests that we can just grab some breakfast from a street vendor.

“This egg coffee is great, and the breakfast is…” she started saying.

“We need to rent motorbikes!” I exhaled. “With guides.  We wouldn’t be driving! Guides on motorbikes who would take us from site to site in Hue. It would be quicker, easier, cheaper…” After multiple assurances that she really did hear me and really did agree and was not going to freak out while on top of a bike in the middle of city traffic, we headed to a close-by café where local motorbike tour guides offered their services.

“The thing that scares me about motorbikes is not the motorbikes,” Julia was saying, “It’s not the roads or the lack of rules, it’s us.  We don’t know how to ride them, and this is not the place to learn. If I am on a back of a bike with someone in front who knows what they are doing, I am not worried.”

Honestly, I was not fully convinced.  Looking around the hectic streets, with cars, trucks, motorbikes, and pedestrians jostling, weaving, and almost bumping into each other, it was easy to be skeptical of her current composure.

Thirty minutes and twenty-eight dollars later, we were saddling up behind two motorbike guides, both named Minh, both on larger motorcycles rather than scooter-like bikes.  We got our helmets on, took an unnecessary amount of “do I look cool on this bike” pictures, and it was time to take off. Julia quizzically looked at me as I was lightly holding on to the back of my guide, trying to look casual.

“Do I just… hold you?” she asked her guide and he nodded and smiled.  Julia plastered herself all over his back and wrapped her hands around his waist.  As my bike suddenly roared off, I found my hands hectically wrapping around my guide’s waist as well.  So much for looking casual. It was clear from the beginning that our guides realized that they had skittish foreign tourists on their backs and drove very carefully through the impossible traffic.  It was also very clear that no one else in this traffic gave a damn who we were, as we were continuously cut off, crowded, and occasionally forced into an oncoming lane. Despite the surrounding chaos, every time I twisted around to look for Julia, she had a wide smile on her face and even managed to dislodge one of her arms to wave at me.   Looking back, it’s clear that in the end, I was the one who spent more time worrying about her safety on a bike than she did.

The plan for the day was very ambitious.  We wanted to take a Chinese dragon boat down the Perfume River to an old pagoda on the top of a hill and then explore three royal tombs of the Nguyen dynasty outside of the city.  After a short ride through the city center, our guides dropped us off at the dock with colorful Chinese boats and told us that they would pick us up near the pagoda exit after we conclude the visit.   Our Chinese dragon boat with its colorful head and tail was slowly gliding through the calm waters of the Perfume River, allowing us to take in the freshness of the morning air and even spot water buffaloes and white cranes on the shore.  We disembarked at the pagoda and spent the next hour exploring its grounds admiring traditional elements of imperial Vietnam with symmetrical courtyards, prayer halls, and numerous beautifully decorated gates and bonsai trees. The pagoda also had a perfect vantage point for taking in the views of the Perfume River as it was making a dramatic curve in the distance. 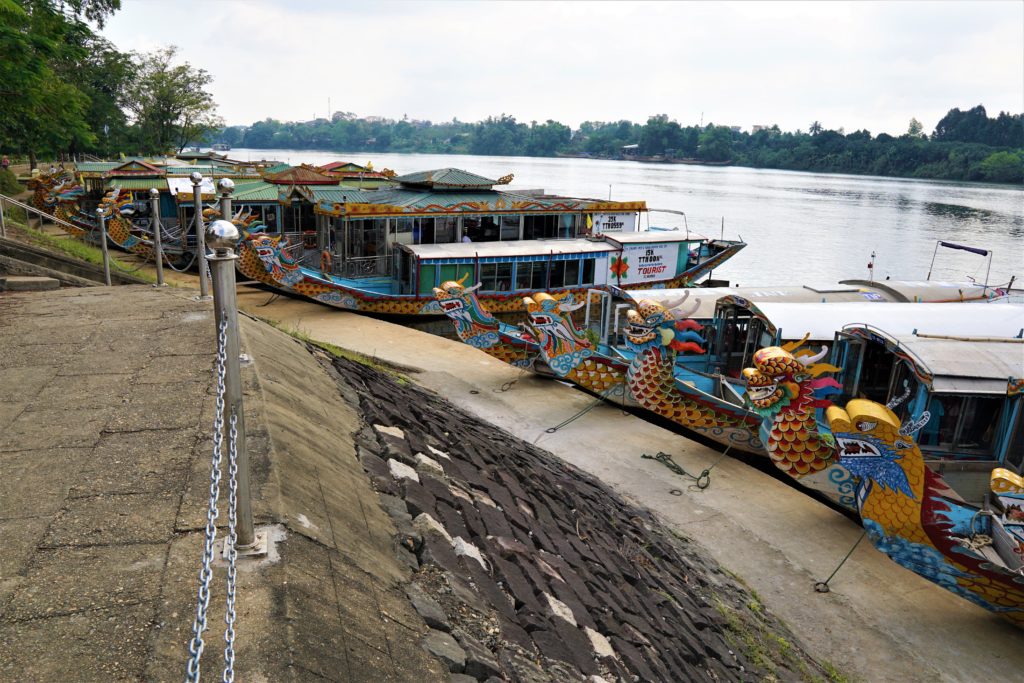 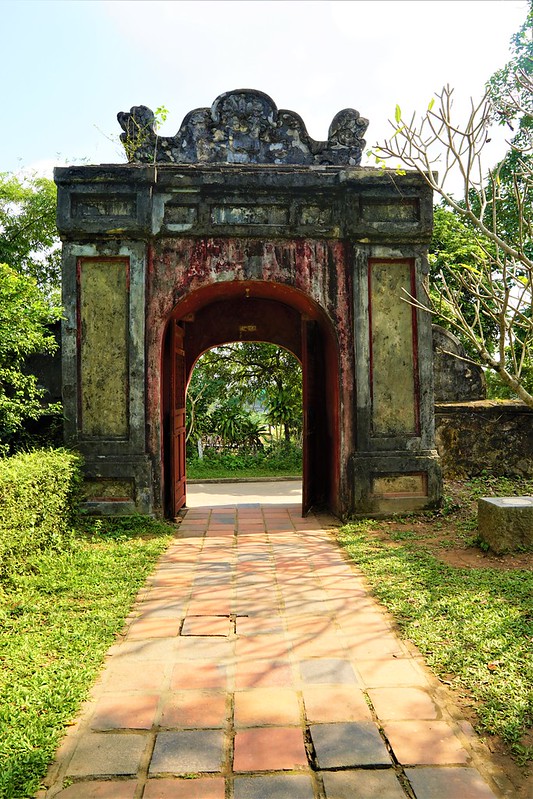 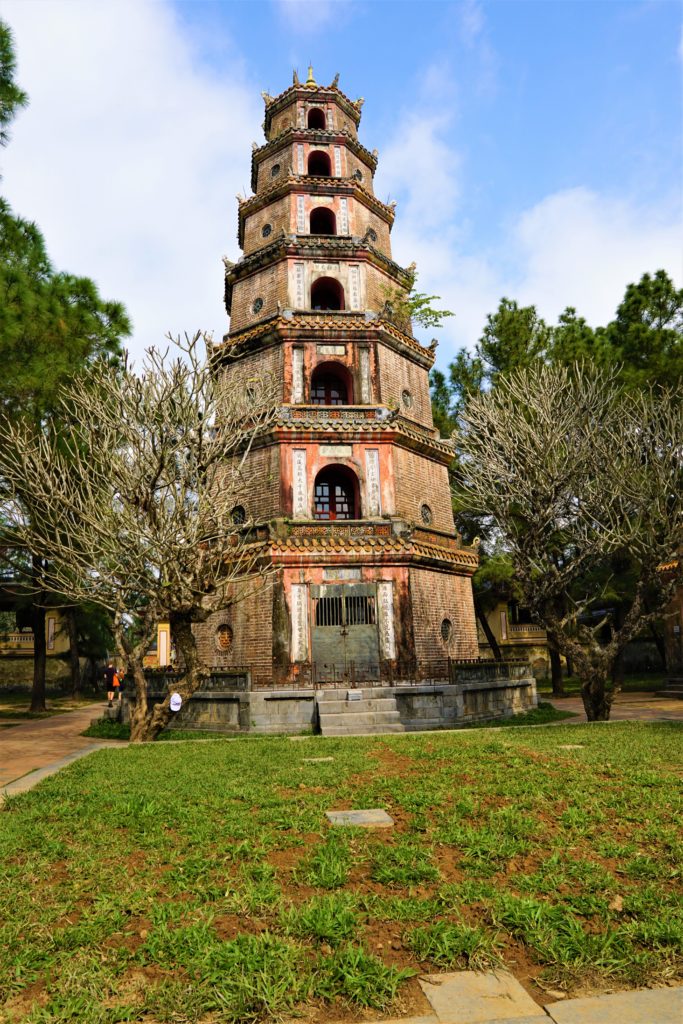 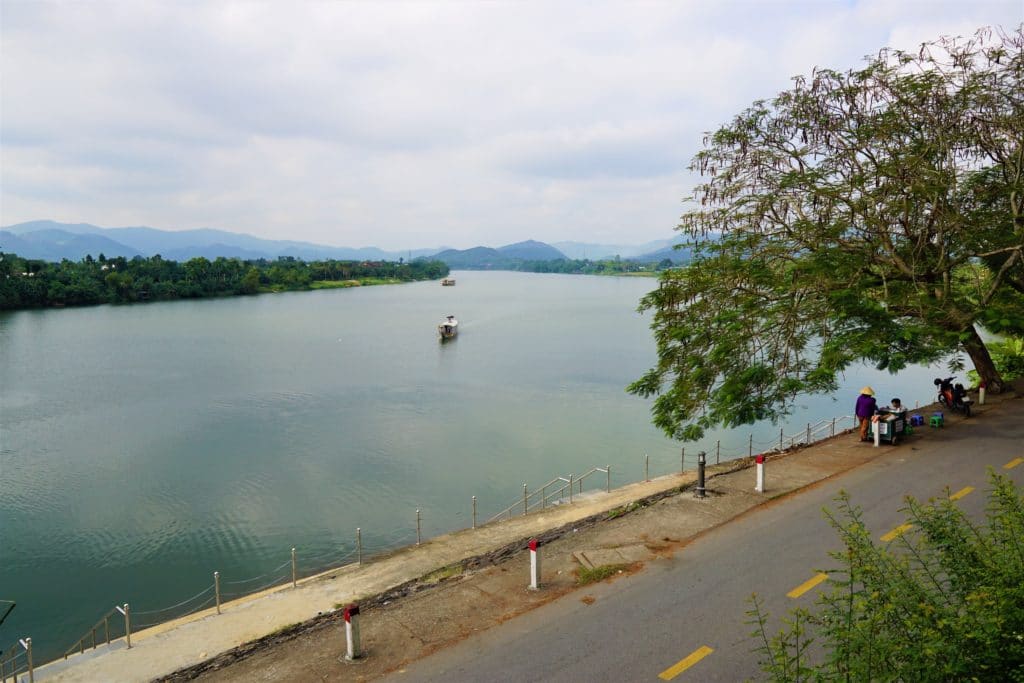 After visiting the pagoda, we headed to the exit looking for our guides.

“Do you remember how they look?” Julia asked. “I always have a problem with that.”

“Don't worry, they would spot us first.” And as I said that, our guides were cheerfully waving their hands at us.

We then jumped on the backs of the bikes and rode outside of the city to our first royal tomb.  Riding in the back of a motorbike on a curvy road with the wind in my face and tall hills hovering over the road in the distance, I became lost in the daydream of learning to ride a motorbike and riding across Vietnam from the tip of the North, all the way to the South.  I glanced behind me to see Julia’s head turned sideways, gaping at the view from behind her guide.  It was probably best to keep my motorcycle dreams to myself at this stage, considering it was our first day ever on a bike.

All three royal tombs that we visited that day were fascinating.  A royal tomb around Hue means an expansive park-like setting with traditional Chinese-influence architecture, courtyards, stellaes, and a goldfish pond.  Each tomb had its own quirk. Minh Manh was located in a peaceful secluded forest away from the crowds. Khai Dinh had a very European feel as it was built in the early 20th century during the French rule and was a mix of European Gothic and Asian architecture.  Tu Duc was the largest, with a number of buildings and tombs of not only the emperor but also his relatives. We were ushered out of the last tomb at the closing time. 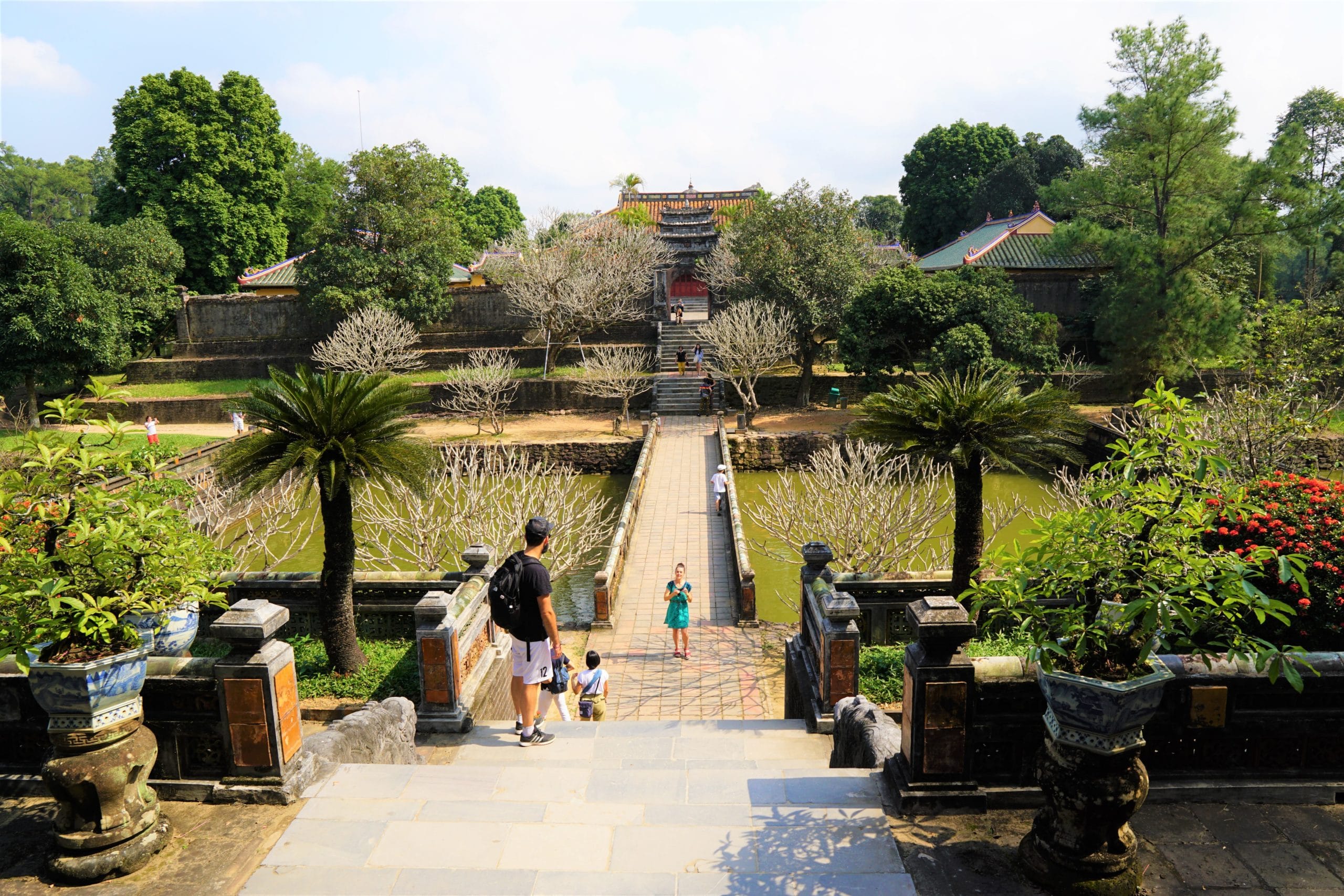 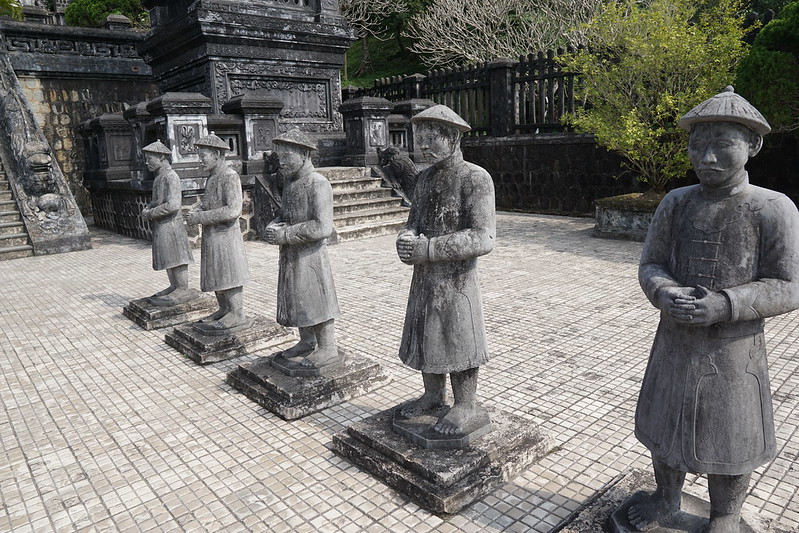 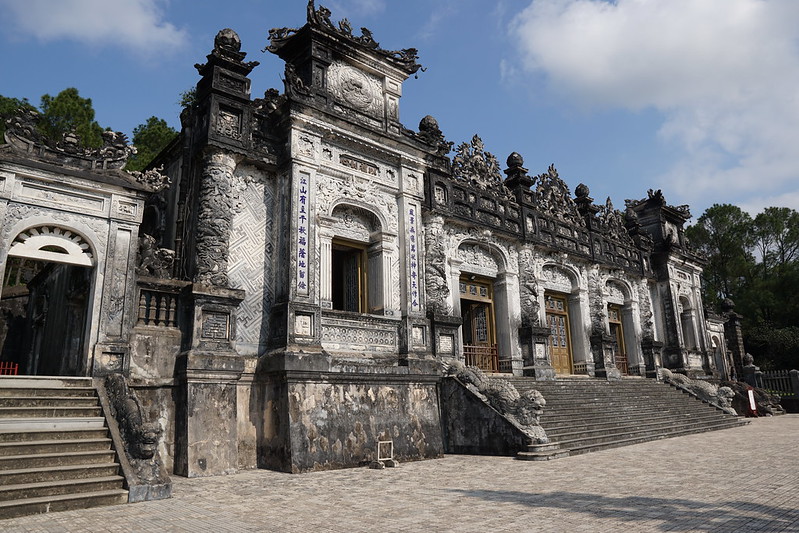 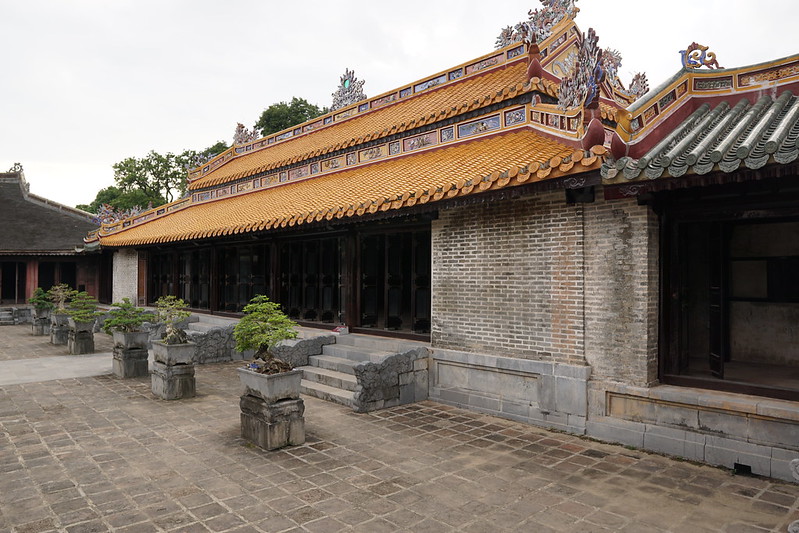 As the day was winding down and we were taking a coffee break at a café, my guide asked, “So what are the plans for tomorrow?”

“Citadel in the morning and then we leave for Hoi An.”

“How about on a motorbike?” Minh asked, his eyes twinkling.

“To Hoi An? On a motorbike? How long would it take?” Julia asked.

“By car, it’s four hours.” Mihn said, “But by motorbike, it’s a full day.  We would drive by the sea; we would make plenty of stops to experience all the sights. Or we can do a two-day motorbike tour.  The first day in the jungle, in the mountains...”

I stared at Mihn incredulously.  Clearly, this man never had “ON A MOTORBIKE? IN THE MOUNTAINS?” screamed at him.

“Riding down the Ho Chi Minh trail, with stops in indigenous villages, waterfalls, and next day down the beautiful Hai Van Pass and Danang.” Minh continued, oblivious to the silent pleading in my eyes. 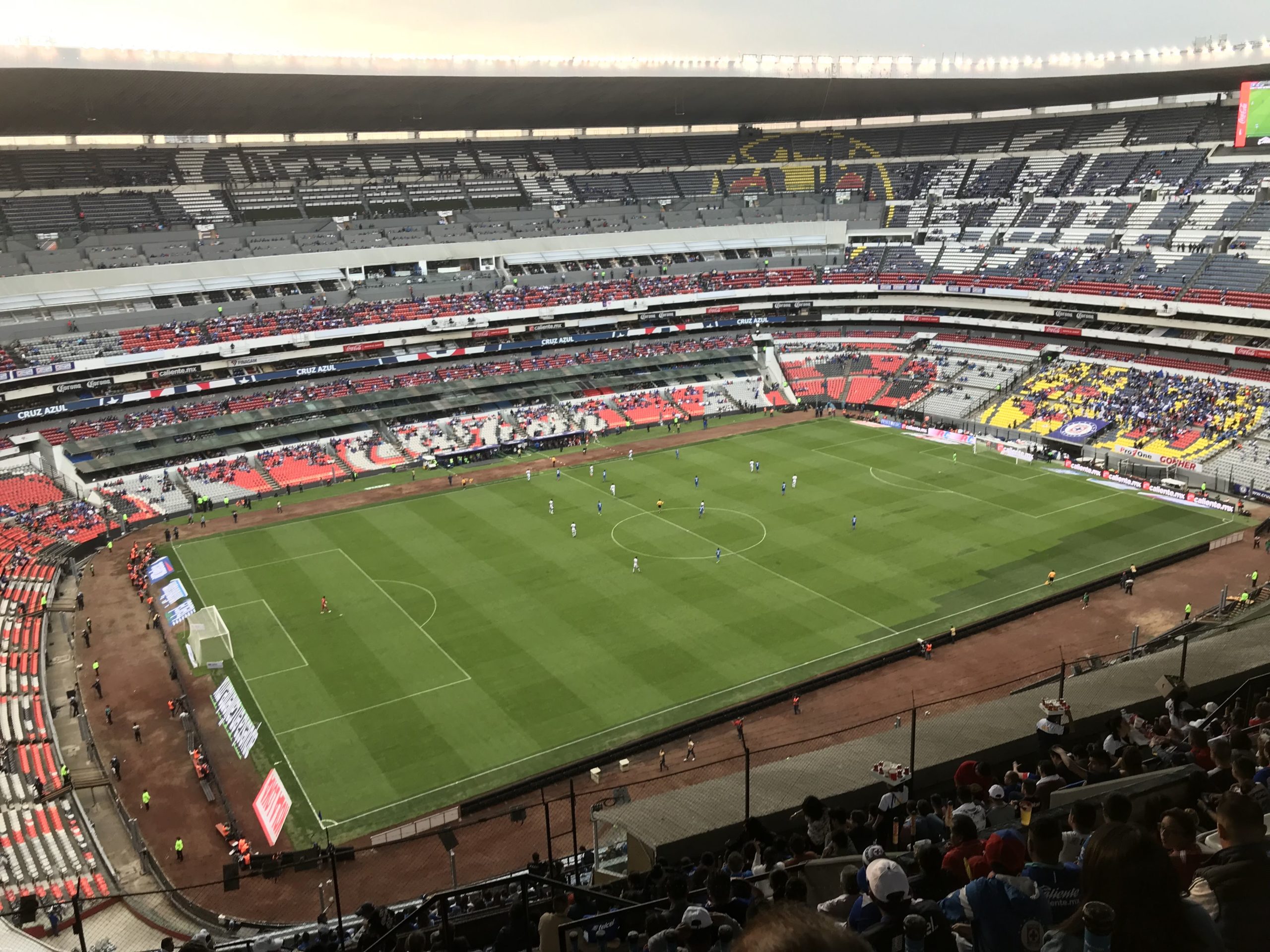 Hand of God and Goal of the Century: Azteca Stadium

Part II: Welcome to the Jungle … on Motorbikes!