Our first lunch on the boat was served on the lower deck, on dark red tables covered by crispy white linens.  Victor and I picked the table closest to the railing, so we could enjoy the unobstructed view of the islands.  The rest of the tables filled up, but the two extra seats at our table remained empty.  We were both happy enough to sit at the table by ourselves, without the usual “tourist meets tourist in a foreign country” chit chat with a couple of strangers.  As we were finishing our first course, a man suddenly appeared at our table.

“May I sit with you?” he asked.  He was one half of the other American couple on the ship and looked a bit like Paul Rudd.

We enthusiastically agreed and obediently started the expected small talk.  Where is he from?  What is his Vietnam itinerary?  Where in the world is his wife?

“Oh, she is not feeling well.” He said, “She decided to stay in the cabin.”

Victor and I looked at each other and as soon as Paul Rudd was busy ordering a drink, I whispered in Russian, “This is how every Agatha Christie mystery starts!  His wife is definitely dead, and the killer is among us!”  Victor pretended not to hear me.

“What’s going on with her?” I asked, straining to sound casual, “I have Dramamine for seasickness or ibuprofen for pain…”

“Oh!” Paul Rudd waved his hand, “She is just in a bad mood, which is the worst kind of sick.  It’s pretty common for her.”

“I think I know who the murderer is!” I whispered to Victor, as soon as Paul Rudd was distracted by a waiter.  Victor, once again, ignored me.

As the main course arrived, I picked up my camera to take a picture.

“And what do you do?” Victor asked Paul Rudd.

“I am a photographer.” He said, glancing sideways at my camera.

I pretended to clean the led screen and put the camera back, without taking a picture of the fish and rice.  It suddenly felt as if I was trying to dance in front of Mikhail Baryshnikov. After lunch, everyone once again disappeared into their cabins, while we stayed on the deck, admiring the natural beauty around us.  In about an hour, we approached our first stop – an island with a gorgeous natural cave and a beach where we could kayak.  As we got off Dragon Pearl and boarded a small transit boat, we saw Paul Rudd sitting next to his wife, who looked very much alive and clearly pissed off.  She pointedly ignored all of Paul’s attempts to talk to her.

“This is probably a body double!” I whispered to Victor. “The real wife is swimming with the fishes!  Investigation continues!”

Victor scooted away from me on the bench as if he didn’t know who I was.  Paul Rudd wasn’t the only one getting aggressive silent treatment on this boat.

After exploring the cave and the beach, we clumsily got into the double-person kayak and tried to push off the shore.  Neither of us ever having kayaked before, we had no idea what we were doing.  Victor sat in front and very aggressively slapped his paddle against the water, trying to get us moving.  Every time his paddle broke the surface, all the water flew directly into my face.  I was trying to match his rowing with my paddle while continuously dodging water splashing into my eyes.  Paul Rudd and his fake wife smoothly sailed by us, their backs straight, rowing perfectly matched, not a sprinkle of water escaping their paddles.  Their kayak quickly disappeared behind the curve of the island.

After the initial kayaking learning curve, we actually didn’t do that badly.  We managed to row our way around a large island, got around a tricky buoy that kept trying to get in our way, and didn’t even flip the kayak over.  In the end, we had fun and lived to tell the story. The evening meal, back on the Dragon Pearl, was served in the dining cabin.  We were the last ones in the dining cabin as we couldn’t pull ourselves away from the deck, watching the sun set behind the islands.  By the time we went in, the only table with available seats was the one Paul Rudd and his wife were sitting at.  I could almost hear Victor groan under his breath.  He was not looking forward to “The Dinner Murder Mystery” shenanigans I was undoubtedly thinking up.  Honestly, by this point, I felt like the investigation has already run its course and not much more fun could possibly be had with Antman's lookalike and the body double of his deceased wife.  I wanted to sit at dinner with the English couple, so I could swap war stories with the robe-wearing husband on how else he drives his wife crazy.

We sat down and started chatting with our table companions.  Well, table companion.  Paul happily engaged in conversation, while his wife pointedly replied to all questions with single-word answers and looked wholly disinterested.  It made the whole ambiance at the table somewhat tense and uncomfortable, but we powered on.  Soon enough, we were laughing and sharing Vietnam stories, as Paul’s wife ignored us.

Meanwhile, our guide was doing his best to entertain all the guests on the cruise.  He pompously presented the entire crew, from captain to busboys, paraded around various sculptures the cook made out of coconuts and leaves, and even sang Vietnamese songs, while accompanying himself on a two-string guitar.  Suddenly, the lights in the main cabin turned off.

“We have a special occasion on our boat!” the guide announced giddily.

My heart dropped.  When I was filling out the form to purchase the cruise, one of the fields asked if we were celebrating a special occasion.  With the cruise being only a few days before Victor’s birthday, I went ahead and typed that in.  Thinking only of possible freebies or upgrades, I failed to consider how much Victor hates public birthday announcements and uncomfortable “Happy Birthday to You” performed in a public setting by strangers.  The captain of the ship appeared, carrying a large cake with candles in it.

Victor was clearly in a panic.

“No!” he whispered in Russian.  “Is this for me? Did you tell them it’s my birthday?”

I could only grimace as the captain and the cake headed straight for our table. “We would like to congratulate our newlyweds, Mike and Susan!  They are celebrating their honeymoon on our ship!” the guide announced, as the captain set the cake on our table, between Paul Rudd and his apparently brand-new wife.

I could see Victor’s face change quickly from panic to relief to confusion.

“Would you like to blow out the candles together?” Mike aka Paul Rudd asked.

Mike shrugged and blew out the candles by himself.

“We wish you a happy marriage!” the guide shouted and started clapping, as we sat in the darkness trying to process what the hell was happening.  Slowly, the rest of the guests joined in the clapping.

“Congratulations!  We didn’t know you were on your honeymoon!” I said as soon as the light were turned back on, hoping I sounded sincere.

Mike thanked me, while Susan stared off into the distance.

After the dinner, back on the deck, looking at the dark silhouettes of islands rising out of the water around us, I defeatedly said, “I was wrong.  There is no Murder Mystery.  That’s clearly his wife and somehow, they still haven’t killed each other…”

“And that’s the true mystery of the cruise.” Victor said, “Why in the world these two people ever got married??” 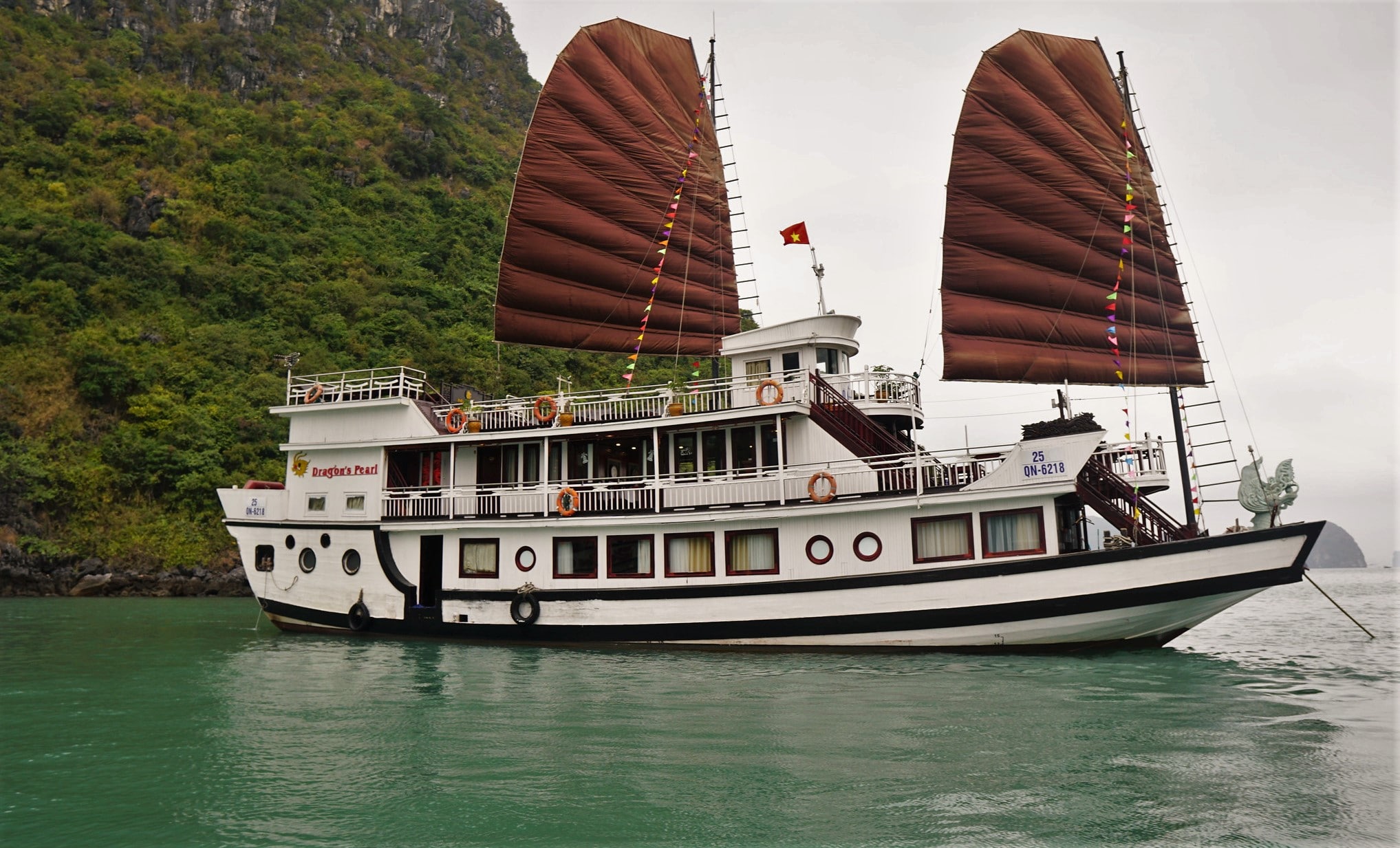 Out of Our Comfort Zone – Backpackers on a Luxury Cruise