“You must be happy when making dough,” said Levon. “That’s the most important part of Georgian cooking.  Your happiness will seep into the dough and make it delicious.  An unhappy person cannot make authentic khachapuri or khinkali.”

We were in a small restaurant in Kakheti, the type of place where the owner greets you warmly at the door and leads you down stone steps into a darkened dining room with heavy oak tables and decorative rugs on the walls.  Levon, our Georgian guide, driver, and friend, was tearing apart khachapuri, an oval-shaped flatbread with sulguni cheese and a raw egg in the middle, mixing the egg into the cheese with a piece of crust.  We passed it around the table, a warm salty cheesy mess on top of fluffy bread that could have only been made by the happiest person in Georgia.

If there is anything Georgia the country has in common with Georgia the state, it’s how fast and easy it is to gain a few pounds while enjoying the abundance of local comfort food.  Whether it was savory perfectly grilled meat chunks on a shashlik skewer with sour plum sauce, or a meat-filled khinkali dumpling, dripping broth all over my chin, or delicious roasted eggplant strips topped with walnut paste, we tried it, we loved it, we ordered more.   We were novices in Georgian food, overly enthusiastic and completely inexperienced, to Levon’s amusement.  He laughed at me the first time I ate a khinkali – first taking a small bite of the dumpling and having the broth squirt across the table on Victor’s father, then overcorrecting by trying to stuff the next giant dumpling entirely into my mouth.  He showed us the correct way, grabbing the dumpling by its twisted doughy tail, devouring it in one bite, and leaving the tail on the plate.

“Only very poor people eat the entire khinkali with the tail,” he said.

“I don’t think I would mind being very poor in Georgia then,” said Victor’s father, reaching for another khinkali. Later, as we drove down a winding road through the mountains, we stopped at a roadside stand to buy some churchkhela.  Candle-shaped grape juice and nuts candy are commonly homemade and are the most popular local dessert.   As Victor and I enthusiastically munched on our churchkhela, we kept commenting to each other how good and fresh they were.  Having finished his, Victor turned back to me and asked for more.

Levon, taken in by our unbridled excitement, asked for a taste.  A minute later he was rolling down the driver’s window and spitting the half-chewed churchkhela onto the road.

“What!” he choked out, “That’s terrible! You guys don’t know what a good churchkhela is!  AND YOU ASKED FOR SECONDS?!”

The rest of the churchkhela were eaten through fits of giggling and laughter, but with no less zeal and praise.

We never had a bad meal in Georgia – khachapuri sold on a street was just as delicious as the ones in richly decorated restaurants.  Every restaurant owner promised us the best meal in Georgia and each one lived up to our already overinflated expectations.  One meal in my memory does stand out, if for the presentation aesthetic than anything else.   We were in a beautiful winery in Kvareli, exploring the endless underground tunnels filled with wine barrels, while the restaurant upstairs was preparing our dinner.  By the time we made our way upstairs, we found our table beautifully set on a veranda, shashlik skewers arranged vertically leaning against each other, fresh bread and dips spread across the table, all framed by a gorgeous background of rolling grapevine hills.  But most surprising were the two photographers, circling our table and endlessly clicking with their giant DSLR cameras.

“Is this your table?” one of them finally noticed us and inquired in English with a German accent. “May we take a few more pictures?  We work for an Austrian travel magazine.” He handed me his card.

We agreed and stood back, admiring the beauty of our table and our quickly cooling shashlik.  They re-arranged plates, squatted by the table and climbed on chairs to get pictures from different perspectives. In the end, my very pointed sighing let them know that it was time to let us eat.  I was going to try to look up their magazine online to see if our table became the centerpiece of the next edition but unfortunately lost their card before arriving home. If there is anything Georgians are prouder of than their food, it’s their wine and chacha (grape brandy).  Georgia is considered to be the birthplace of wine, as archaeologists have traced the world's first known wine creation back to the people of the South Caucasus in 6,000BC.  Early Georgians discovered that grape juice could be turned into wine by burying it in giant underground pots for the winter.  Georgians today continue to produce homemade wine in buried ceramic pots in their background sheds, while commercial wine production is the 2nd largest by volume among ex-Soviet Union states. Wine in Georgia is a tradition, a sacred ritual, a family business passed on from father to son, the national pride and the top reason for tourists to visit.

While I usually don’t like wine, I ended up appreciating sweet and flavorful Georgian wine.  On a tour of the Kindzmarauli Wine factory, the guide, a proud Georgian woman with professional gravitas, spent a considerable amount of time explaining the ins and outs of wine production to us.  Savoring yet another sample of incredibly sweet wine, I decided to ask what seemed like a logical question, “How is Kindzmarauli so sweet?  Is sugar added to it?”  The guide stared at me, her mouth working wordlessly.  The silence that followed seemed to go on forever until interrupted by the sound of Levon’s palm hitting his face.

“No…” exhaled the guide, as her trance was interrupted by Levon’s exasperated murmuring, “We would NEVER….” She closed her eyes to recompose herself. “NEVER add sugar to our wine.”

The entire group of tourists then stared at me as I apologized, stepped back, possibly curtsied, apologized again, and searched for an exit. This was the biggest faux pas I made in Georgia until literally the next day Victor went to buy some chacha for his father to take to Belarus.  At a local atmospheric market, an older Georgian man was selling homemade chacha and offering samples at his tiny stand.  As Victor sampled the grape brandy, he turned to the owner and, possibly still under influence from yesterday’s detailed winemaking tour, asked, “And how do you make this chacha?  Is there a secret ingredient?”

The old man looked around him as if searching for hidden cameras.  Churchkhela vendor at the next stand shook her head and heavily sighed.

“Young man….” Said the owner after a substantial pause, “Only my son, MY OLDEST SON, knows my secret recipe!”

Now it was Victor’s turn to apologize and buy enough chacha to cover up for this cultural misunderstanding.

We flew home with bottles of chacha, wine, sour plum sauce, and churchkhela sticks wrapped in paper stuffed into every backpack pocket.  We carried quickly fading memories of smells, tastes, and textures, digital photographs of beautifully set tables and street khachapuri wrapped in greasy newspaper, recollections of Levon’s entertaining stories and toasts, and the reminiscences of Georgian love baked into every dough and fermented into every bottle of wine.   As every tourist ever to set foot on Georgian soil, we ate and drank our fill, and we dream of going back for more. 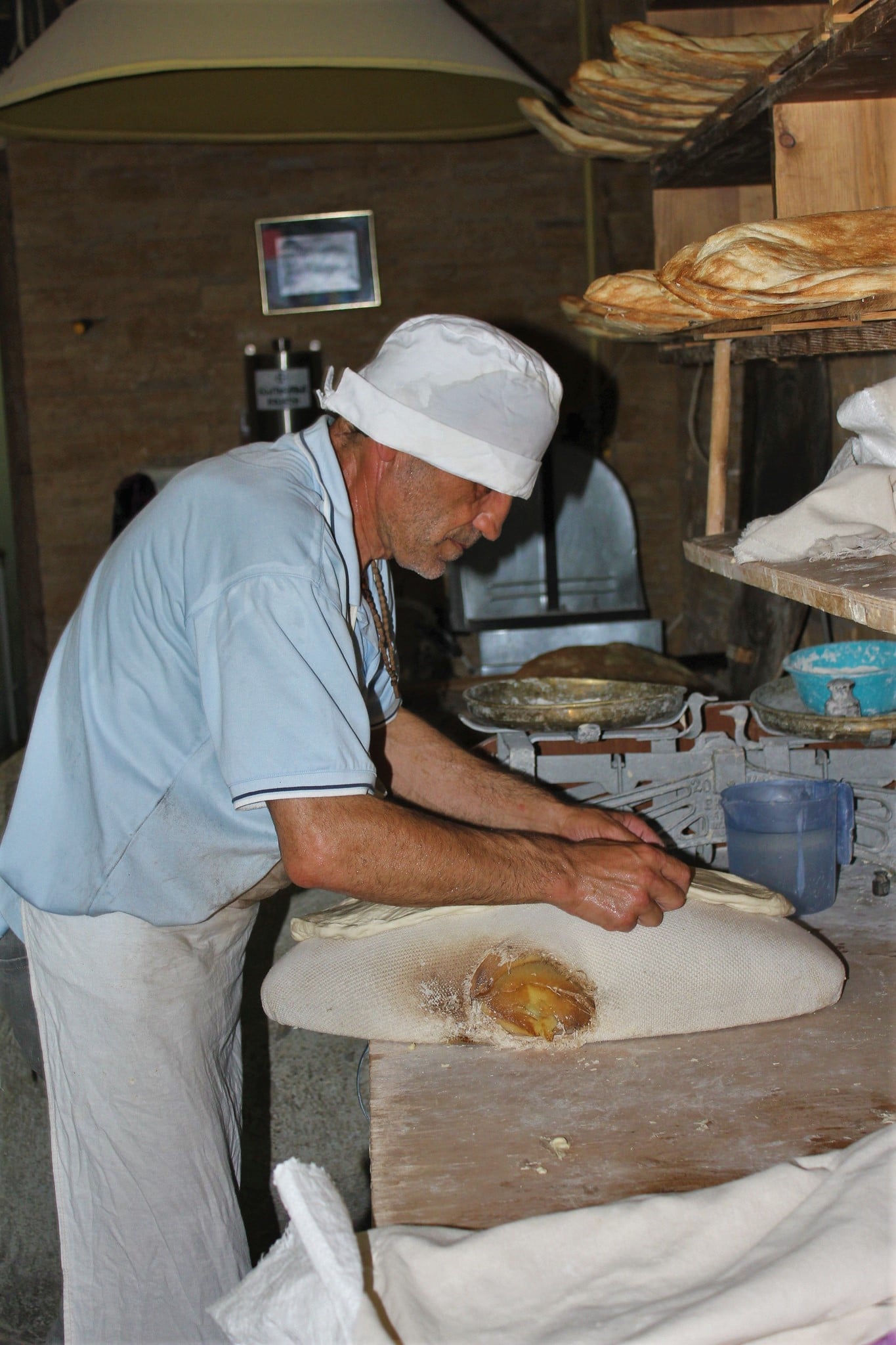 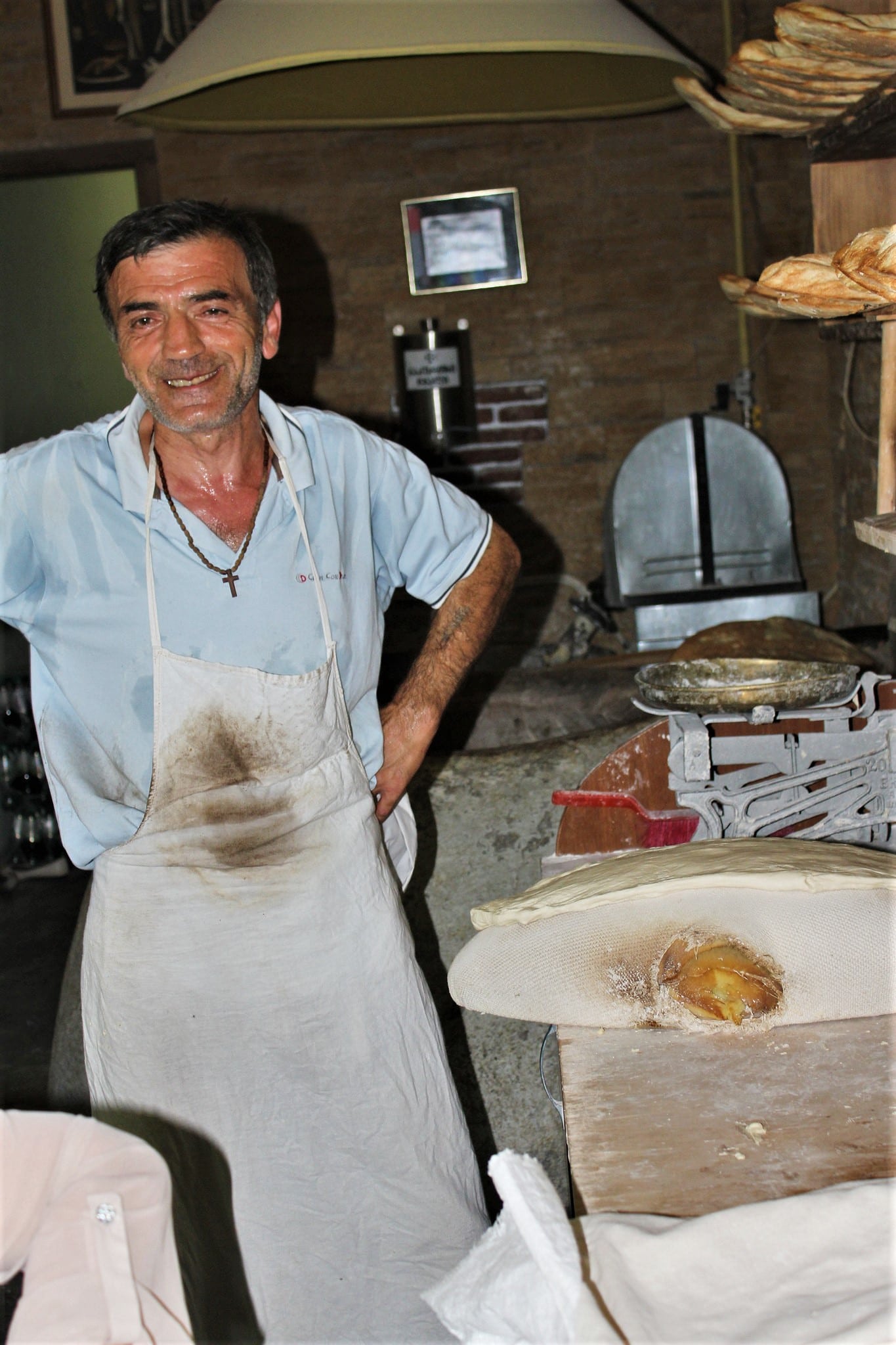 Georgia the Country, Not the State